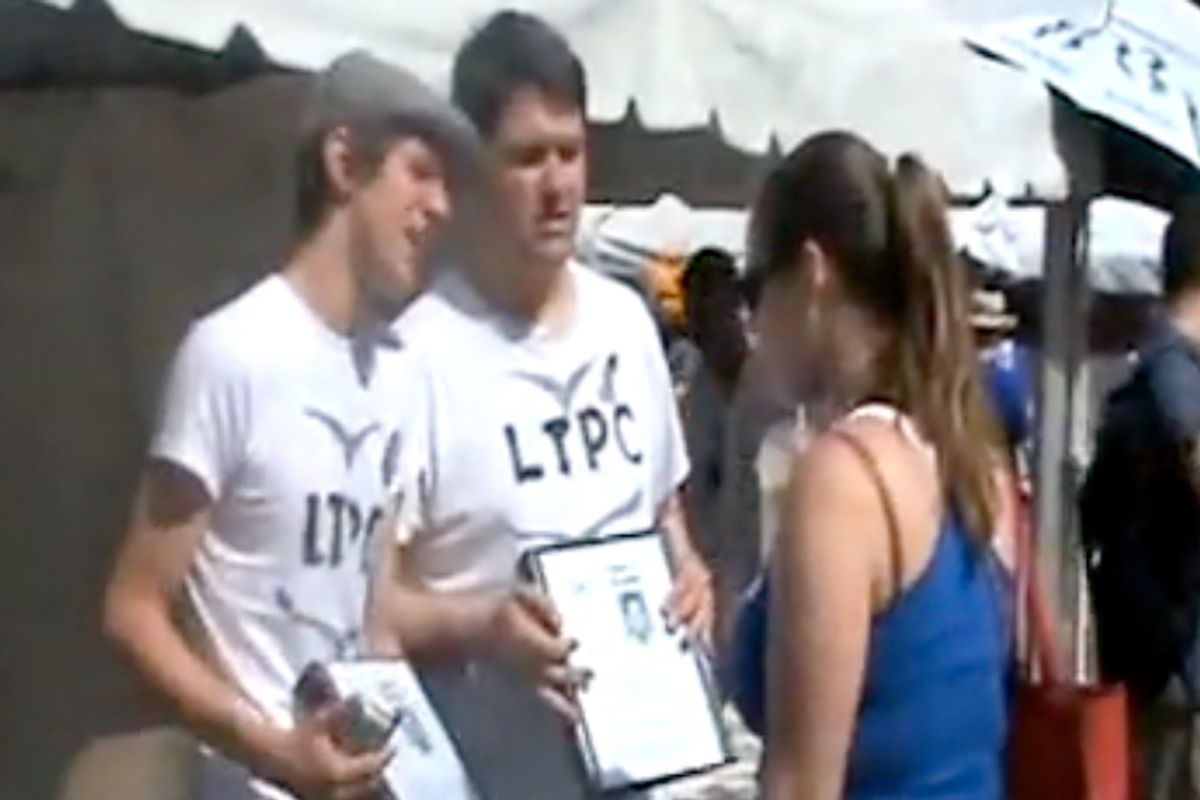 O'Keefe and Wetmore try to convince people to adopt a Guantanamo detainee in a still from their "Love Thy Prisoner Campaign" video.
--

Once upon a time, I was a college newspaper editor. My college was small, affluent, private, and pretty darn liberal, nestled into the safe haven of Northwest D.C. -- American University. Our paper was typical of college papers, from what I've heard: staff too small, nights too short, articles too long, reporters either unreliable or psychotically committed. Half of our staff seems to have gone on to great, or at least stable, careers; I would guess the other half have gone on to drinking problems.

Around my junior year, a competitor suddenly cropped up: A conservative newspaper, edited by one Ben Wetmore, funded by an outside conservative organization. While we survived on pizza ads and classifieds (oh, those halcyon days before Craigslist), Wetmore ran an ad-free paper that didn't have to abide by any rules but whatever he, as editor, said. It was a frustration to our independent -- or, as Wetmore would call it, liberal and obsequious -- newspaper every week. As far as I can remember, Wetmore's paper didn't last that long.

That was probably because the young conservative had bigger fish to fry. Later that year, he started a Web site, BenLadner.com, which featured rants (well-deserved) about our university president, Dr. Ben Ladner, and his lavish spending habits. That was fine. The semi-stalkery close-up photos of Ladner's home weren't so cool. Within a year, he'd made off-campus headlines for trying to video record a speech by Tipper Gore and being asked to stop. When he refused, he was detained and charged with disciplinary violations. Later, Ladner sued Wetmore to get him to take BenLadner.com down -- a case the older Ben rightfully lost.

So where do you go, after a storied career of conservative college muckraking? You go into full-time conservative service. And in Wetmore's case, you go on to hosting conservative provocateur James O'Keefe as he and colleagues plotted a new prank that turns out to be a crime: O'Keefe, of course, now stands accused of attempting to tamper with the phone lines in Sen. Mary Landrieu's office. When I saw Wetmore described as O'Keefe's apparent New Orleans host in the New York Times, I had to think more about what my old journalistic rival's career path tells us about American conservatism today, and how much can be traced to late-'90s political tension on American college campuses.

Wetmore bounced around through a few predictably political and conservative jobs -- president of Students for Life of America, for instance -- and wound up as the director of student publications at the Leadership Institute, which runs the Collegiate Network. This organization is dedicated to encouraging alternative -- read: right-wing -- newspapers on campuses that are seen as particularly liberal. It was there that he hired, he's written, James O'Keefe. Though O'Keefe left the Leadership Institute before Wetmore did, the two apparently remained friends – close enough that O'Keefe and two of his alleged accomplices bunked with Wetmore before their fateful trip to Landrieu's office.

Was Ben Wetmore involved in all of that? I have no idea. Maybe offering a place to crash is as far as it goes. Maybe he just made the guys bagels in the morning and then set off to do his Loyola law school homework, oblivious to their plans. Speculating on his involvement right now misses the point: He's still the guy who bought James O'Keefe the camera equipment he used in his infamous Pimp and Prostitute meet-up at ACORN’s headquarters, and, in the blog that has now been taken down on his Web site, he seems pretty proud of it. He's also the guy who drafted a proposal that Students for Life of America hire O'Keefe -- at a salary of $40,000 a year plus travel and expenses -- to do video productions on par with his ACORN work.

Ben Wetmore is a guy I only know a little about. Our paths certainly crossed at college -- we were in the same relatively small major, working at competing papers, attending the same events, and often angry at the same administrators -- but we were only acquaintances. He hasn't responded to an e-mail I sent asking him questions about O'Keefe, Basel and Dai.

Yet I know a fair amount about the climate that births people like Ben Wetmore and James O'Keefe and Stan Dai. There's a certain element of the population that enjoys nothing more than a good fight. I don't mean "good" as in fair: I mean aggressive. Bloody. Dirty. These fighters exist on both sides of the political spectrum and have ugly histories, but it certainly feels like only one side is making a comeback. This comeback, however, isn't solely rooted in the victories of 2008 and the disaffectation of 2009. It has just as many roots in the political chaos of the late '90s on college campuses.

Politically interested students gravitate toward political science, and most of us find it almost immediately frustrating. Classes full of theory offered little to no perspective on the raucus events of my college years. The most interesting learning happened in the halls, where most of us gathered to bemoan the political indictment of Bill Clinton. It was one large lunch room where a student arguing that Clinton's moral wrongdoings should have seen him kicked from office could never find a comfortable table to sit at.

So most of the conservatives on my campus learned to revel in discomfort -- both the experience and the production. There's nothing more satisfying to a 20-year-old kid of this disposition than to walk into a hallowed hall of learning with a pick-ax and start breaking shit up. Marble columns? Ivory towers? Down you fall. In the early 2000s, there were few educational organizations left in America that could make a conservative feel so oppressed as American University. Maybe Berkeley. Maybe Evergreen. But neither of those places would really work out if you wanted to attend a school close enough to Capitol Hill that you could snag an internship with Newt or Trent or Tom.

So AU, which prides itself on its diversity, drew a small cadre of right-thinking kids who couldn't quite make the cut at elite Georgetown -- where maybe their adherence to a religious, conservative belief system would have been more tolerated. AU drew them, and then they had no idea what to do with them, when it discovered that these kids both embodied and hated their mission of bringing diverse discussion to campus. Ben Wetmore was a leader in this group. He was anti-government in ways that should have made the anarchists on my staff jealous. He was "pro-life" on a campus where Kate Michelman came to speak without facing a single protester. He was a crusader given a daily cause, and he provoked and earned praise from both sides of the aisle. Liberals wanted to strangle him, even as they found themselves defending his right to say whatever he wanted. Conservatives weren't terribly enthusiastic about his methods, but they found strength in his message.

In this type of environment, it's no wonder that a Ben Wetmore or a James O'Keefe would not only prosper but grow powerful. The trouble came when college was over. The antics that earned Wetmore Big Fish status in the small liberal pond at AU weren't so charming or even so noticeable off campus. You have to go bigger to get noticed. You have to get bolder.

In a piece for Campus Reform, Wetmore urged conservative students to never give up the fight -- for media coverage. "If the media is covering your story, push for even more media coverage. If the local newspaper carries an article about the situation, try to get on the local TV station. Then, start contacting the state and regional papers. National radio and TV hosts often give powerful coverage to conservative students persecuted by the left on campus. If you get an opportunity for national media attention, take it -- even if the situation seems to have been resolved."

This is the advice that Wetmore was giving college conservatives in 2009, while he was director of outreach for Massachusetts Citizens for Life. He took time out from campaigning that summer to hang out with James O'Keefe for a day, which they spent trying to get people to sign up to be host families for Gitmo detainees. Then they spliced video of people discussing the unfair treatment of detainees with footage -- graphic footage -- from 9/11.

Inspired activism? Or an extension of the kind of trouble that a college kid with too much time between classes gets up to?

Maybe no one could have predicted that James O'Keefe would end up getting arrested in New Orleans -- but the first thing I did when I heard his story was Google Ben Wetmore. Something in the scheme screamed College Conservatives 4-Eva!.

That guys like O'Keefe and Wetmore have chosen over-the-top satire over serious debate doesn't mean they are any less organized -- or any less troubling -- than their mainstream conservative peers. In fact, the fun that Wetmore and friends seem to be having in their videos and postings is perhaps the most collegiate and compelling part of their entire scheme. For years, conservatives have been used to seeing themselves represented by old, boring, angry white men who tediously take liberals -- many of whom come out of the once-fun counterculture -- to task on dry editorial pages and at stuffy conventions. That's no fun. The allure of Wetmore's conservatism is that it seems to have never left the let's-get-a-beer-and-talk-abortion climate of a College Republicans after-party.

So this is the lesson for progressives to take from the O'Keefe fiasco: Watch out. Guys like James O'Keefe and Ben Wetmore are working to make conservatism fun, funny and ultimately extremely well known, and they've been at it for years. They have their patrons in conservative philanthropy and now in the media, as aging angry guys like Andrew Breitbart and Sean Hannity embrace these new activists for their liberal-baiting "stunts." They will screw up -- O'Keefe apparently did -- but they are not going away.

Jenn Kepka was a student journalist for four years at American University; she is now a writer with two day jobs in Oregon, and she blogs about politics as Saturn Smith on Open Salon.