The perfect double bill: "Zombieland" and "Road to Utopia"

Join Bob Hope and Bing Crosby in a zombified America! Plus: Terrifying revelations about Bill Murray 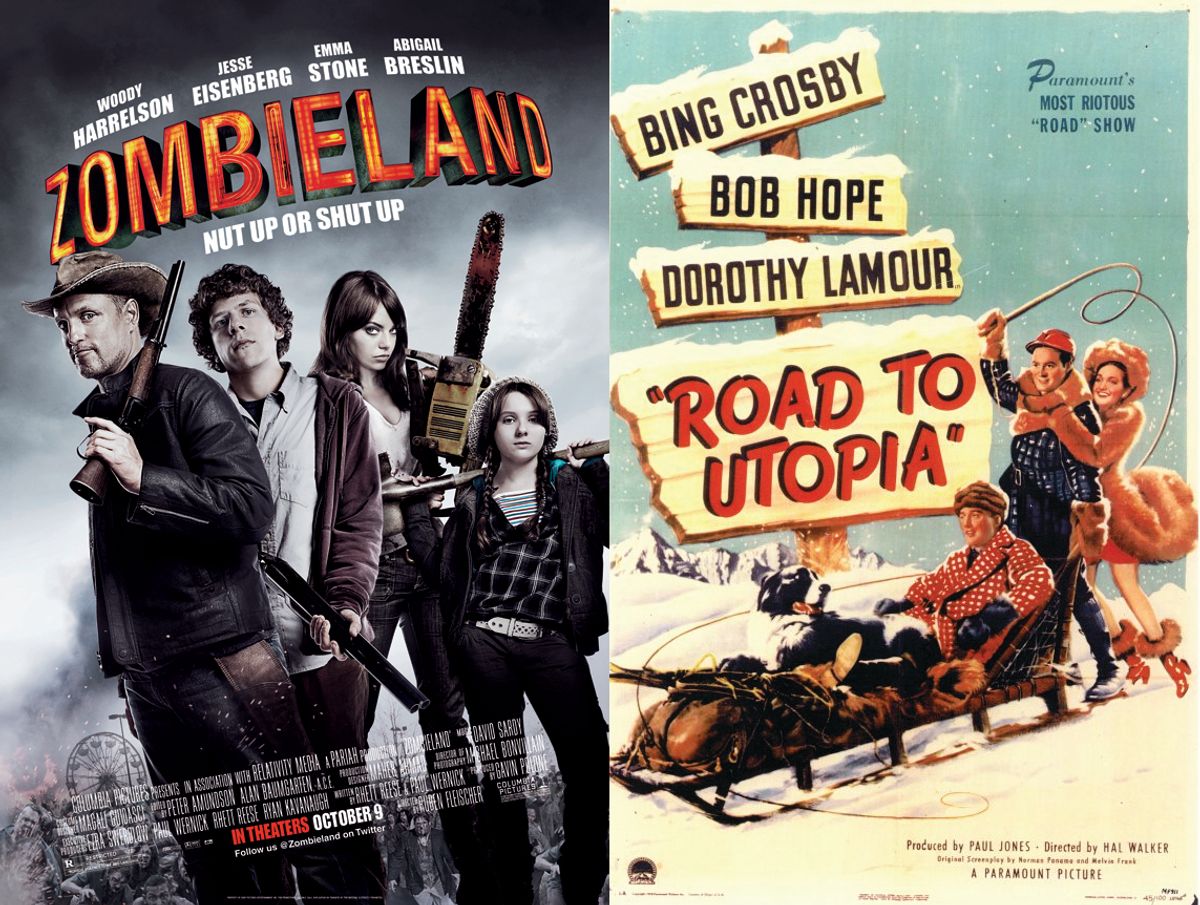 One can argue that the reign of the American Empire stretched from the Japanese surrender on the deck of the USS Missouri in September 1945 to another September day in 2001: A 56-year bracket where a self-confident America insouciantly blundered around the world, without any real intimations of mortality.

If one looks to our most enduring export for signs of those times, movies are filled with portents. Forget the films that actually set out to make any kind of explicit artistic statement about the subject. More cryptic road signs can be found in this week's double bill.

"Zombieland" and "Road to Utopia" are fun-house mirrors of one another, two road pictures that sprawl across the American landscape, with antiheroes wisecracking their way through life-and-death situations, both shot through with comic surrealism, both featuring perhaps the coolest living human being of their respective times in a pivotal role.

More on that later.

Why, then, is the zombie such a cultural totem in the 21st century? Sure, this archetype came lurching out of George Romero's Pittsburgh in 1966, but now the undiluted horror has been anesthetized and become shambling shorthand -- but for what? Romero brilliantly and literally performed a shotgun wedding between his creation and a satiric depiction of soulless consumerism in his "Dawn of the Dead" in 1978, and since then, zombies have been hauled out in all manner of stumbling forms to provide plot engines for adrenaline-fueled thrillers ("28 Days Later" and its sequel), comedies ("Shaun of the Dead" and "Zombieland") and straight-out horror.

Not to stretch too far, but perhaps it is this "doesn't know that it is dead but still shambles on" vibe that connects the zombie with our pre-apocalyptic, end-of-empire, post-Bush American landscape, terrain explored in "Zombieland," which was released this week on DVD.

"Zombieland" is a shaggy exercise in nostalgia, fusing two modern genres, the stoner comedy and the ultraviolent zombie movie, into one amusing product. This road movie composed for a quartet follows a merry band of adventurers as they cross the zombified United States in search of the paradise that awaits them in Pacific Playland (don't ask).

All the familiar tropes of the genre are trotted out, and skewered with even more relish than the mangled supporting cast. Perhaps most wonderfully, the film honors the Golden Rule of Movie Comedy, which is thou shalt not be any longer than 90 minutes. In this case, a merciful 81.

There is an overwhelming good nature to this film, an affable, dare I say humanistic, quality often found missing in more cynical exercises, and the gags are numerous, bloody and surprisingly witty. But the road followed by "Zombieland" is closer to the Cormac McCarthy variety than the affable highway of the Bob Hope/Bing Crosby "Road to" pictures, perhaps the defining pop-culture products from the Dawn of the American Empire.

This series gave us more than the first name of Jackson Browne, who once confessed he was named for the oft-uttered catchphrase in 1947's "Road to Rio": "Solid, Jackson." These films were defining moments of the 1940s, an era that seems impossibly remote today. The Greatest Generation is remembered for storming Omaha Beach, not laughing at jesters of the republic like Abbott and Costello or Fred Allen. It seems Preston Sturges is the only comedic film artist of that era who has made the jump to those fly-in-amber Criterion box sets.

If it's a culture crime that a decade of comedy has simply vanished from memory, a simultaneous witness for both the defense and the prosecution is Bob Hope. Here's an American comedic legend who quite simply was not funny -- at least publicly -- for 50 long years, a creative desert entered the day that principal photography was completed on Frank Tashlin's "Son of Paleface" in 1952, and left by Hope's death in 2003. This very public lack of discernible humor not only doomed Hope to critical oblivion, but may have impacted the reputations of many of his contemporaries as well.

At the absolute peak of his artistic reputation in the early '70s, Woody Allen stunned New York intellectuals by hosting a Hope tribute called "My Favorite Comedian" -- and considering how thoroughly Allen xeroxed Hope's mannerisms across his "early funny films," maybe Hope's comedic genius did live on during his 50 lost years.

The thing is, the unfunny cue-card-reading comic zombie who was justifiably reviled by those in the know during our lifetimes was actually, for a few years, one of the truly funniest men on the planet. Now, at the time of that ascension, Hope shared the planet with Adolf Hitler and Joseph Stalin. So, there is that. But still, Hope was the preeminent comic voice of the 1940s, and of his adopted country. And you know what?

He was really funny.

The golden age of Hope's work spanned seven years, from 1941's "Road to Zanzibar" to 1948's "The Paleface." In "Road to Utopia," one of the most perfect comedies of that decade -- oh hell, let's say of the last 75 years -- Hope and Crosby accomplished a rare thing, an ad-libbed, brilliantly performed surrealistic romp through the fourth wall of studio convention. Their comic timing has to be seen to be believed, and "Road to Utopia" is the place to go to be converted.

The plot, and such a thing is really no more relevant than "Zombieland's" wet-cocktail-napkin narrative, sends our boys up to a mining town in Gold Rush Alaska, sort of a high-gloss Paramount "Deadwood," with expletives deleted. There, of course, the team meet Dorothy Lamour, feud, play patty-cake with bad guys, and basically radiate the impression that there is a putting green just off camera that they're going to get right to, once they quip their way through this next take.

Which of course there was.

The 1940s "Road to" films exude that can-do spirit that whipped Tojo and Hitler, invented rock 'n' roll, put giant tail fins on a Caddy and hit a golf ball on the Moon, a spirit where everything is possible, everything is permitted, and if the permits aren't around, well, they can be easily forged.

It's a concept of America now being chased out of the Zeitgeist by zombies, but a spirit that animates "Road to Utopia," if you're willing to tolerate references to Bob Hope's radio sponsors and some occasionally lugubrious crooning from Crosby.

Why is this particular "Road" picture rated any higher than the other six? Well, it is perhaps the most surreal, has an absolutely perfect twist ending that "Lost" won't have a prayer of matching, and, oh yeah, features Robert Benchley. The same cultural amnesia that has relegated most of the popular culture of the '40s to grizzled collectors passing around samizdat cassettes of old Fred Allen radio shows has not been kind to Benchley or his reputation. But for 20 years, from the mid-1920s to, well, his appearance in "Utopia," he was one of America's most beloved public intellectuals, bringing the Algonquin Round Table's snap, crackle and pop into the lives of the masses. In "Utopia," Benchley provides the narration, annotating the credits, popping up in the corner of the screen to comment on the increasingly bewildering plot, and generally elevating the discourse with every portly appearance.

Benchley also lifted up another lost comedy masterpiece, 1945's "It's in the Bag," which showcased the Hall of Fame of lost '40s comedians, Fred Allen, Jack Benny, Hope sidekick Jerry Colonna and just about every great character actor of the era in an astonishing brew of fourth- (and even fifth-) wall-breaking surrealism. Mel Brooks remade this as "The Twelve Chairs," but the original is worth seeking out if you can find it. In one of the film's best existential sequences, Fred and family are led up, up and up through the 12 levels of hell in a nightmarish movie palace, all in the unrealized hope of seeing tonight's movie, which just happens to be called "Zombies in the Attic."

As Mark Twain once observed, history doesn't repeat itself, but it rhymes.

To focus on Hope and Benchley and Allen and not mention Bing Crosby would, of course, be like a discussion of "A Hard Day's Night" without name-checking Lennon, McCartney and those other two guys. Artie Shaw, another consummate '40s artist consumed by cultural amnesia, put it best in 1992: "The thing you have to understand about Bing Crosby is that he was the first hip white person born in the United States."

One could also argue Bing was the last hip white person born in the United States, but we'll save that for a different time. In "Road to Utopia," not-so-straight-man Crosby exudes cool from every pore. Here's a guy who managed not to sweat the details from the mid-1920s to his infamous 1977 Christmas duet with David Bowie, a 50-year run of cultural relevance and absolutely astonishing career focus. And he managed to get in quite a few rounds of golf as well.

In preparation for this little screed, I went through some of the original reviews for "Zombieland." An astonishing number of critics cheerfully gave up one of the best-hidden jokes in the film, without a spoiler warning. Why, in the name of God, why do they do that?

Consider yourself warned. Read to the last paragraph now, if you want to hold on to your plot virginity.

Quite simply, Bill Murray is Bing Crosby. Both define Caucasian cool, both effortlessly sleepwalk through their most visible career triumphs, and of course, both not only radiate a vibe that says "I'd rather be golfing" -- they actually did so at every opportunity. They both seemed to be tuned into some kind of private celestial choir, and that they can make us sing along with it, without any outward effort, is an artistic gift that defies all rational explanation.

Bill Murray's appearance in "Zombieland" provides by far the film's best moment, and fusing his persona of out-of-body hipness with the zombie ethic is a true moment of cinematic greatness.

This double bill, "Zombieland" and "Road to Utopia," shows us how far we have come, but how little we have truly traveled across the rise and fall of the American Empire.

Bing, Bob, Fred and Robert have passed on, as has the entire concept of a "public intellectual." And as we contemplate our end of empire, our self-confidence is eroded, our golf courses overgrown with weeds and newly fallen heroes, but we can still find time to celebrate hip heroes and celestially inspired happy endings.

Who might be the new Hope and Crosby? We'll take a pass on "Ishtar's" not-so-dynamic duo of Warren Beatty and Dustin Hoffman, but what currently popular actor/singer/whatevers might be teamed today to achieve the same comedic results? Don't kill yourself trying. Remember, the original cast of the first "Road" picture was supposed to be Fred MacMurray and Jack Oakie.