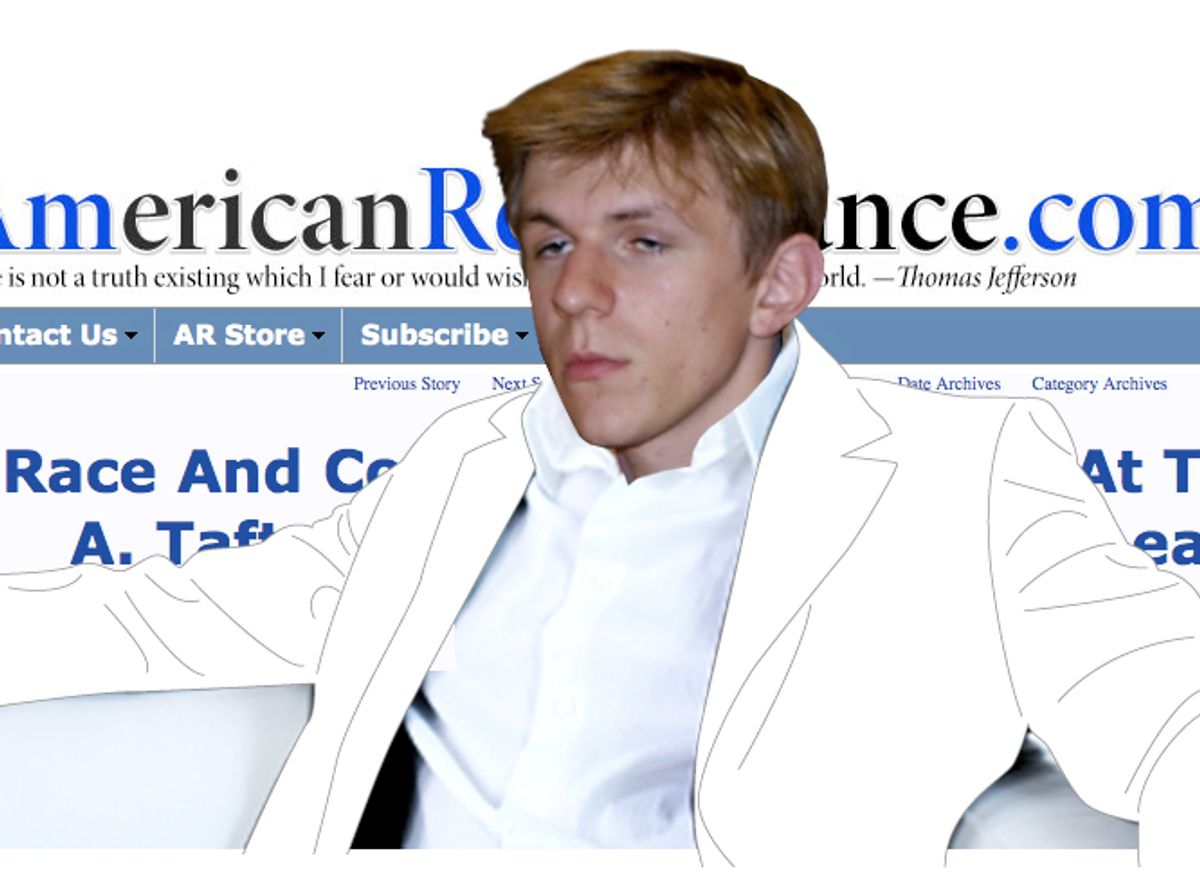 James O'Keefe, photographed at a white nationalist conference by One People's Project.
--

(This article has been corrected since publication.)

Many of the conservatives who gleefully promoted James O’Keefe’s past political stunts are feigning shock at his arrest on charges that he and three associates planned to tamper with Louisiana Sen. Mary Landrieu's phone lines. Once upon a time, right-wing pundits hailed the 25-year-old O’Keefe as a creative genius and model of journalistic ethics. Andrew Breitbart, who has paid O’Keefe, called him one of the all-time “great journalists” and said he deserved a Pulitzer for his undercover ACORN video. Fox News’ Bill O’Reilly declared he should have earned a “congressional medal.”

His right-wing admirers don't seem to mind that O’Keefe's short but storied career has been defined by a series of political stunts shot through with racial resentment. Now an activist organization that monitors hate groups has produced a photo of O'Keefe at a 2006 conference on "Race and Conservatism" that featured leading white nationalists. The photo, first published Jan. 30  on the Web site of the anti-racism group One People's Project, shows O’Keefe at the gathering, which was so controversial even the ultra-right Leadership Institute, which employed O'Keefe at the time, withdrew its backing. O'Keefe's fellow young conservative provocateur Marcus Epstein organized the event, which gave anti-Semites, professional racists and proponents of Aryanism an opportunity to share their grievances and plans to make inroads in the GOP.

One People's Project covered the event at the time, sending a freelance photographer to document the gathering. Project director Daryle Jenkins told O'Keefe manned a literature table  filled with tracts from the white supremacist right, including two pseudo-academic publications that have called blacks and Latinos genetically inferior to whites: American Renaissance and the Occidental Quarterly.  The leading speaker was Jared Taylor, founder of the white nationalist group American Renaissance. "We can say for certain that James O'Keefe was at the 2006 meeting with Jared Taylor. He has absolutely no way of denying that," Jenkins said. O'Keefe's attorney did not respond to a request for comment on his client's role in the conference.

[Subsequent to publication, freelance photographer Isis told Salon she saw O'Keefe helping with the event and believed he staffed the literature table, but her only photograph of O'Keefe was cropped so that the literature table isn't evident. "He was helping Marcus Epstein in the execution of the event," the photographer recalls. "O’Keefe was involved the same way you would be involved if you went to a party and you put out the cups and stocked the cooler.”]

O'Keefe's racial issues can be seen in many of his prior stunts The notorious ACORN videos highlighted images of himself dressed as a pimp, deceptively edited through hidden camera footage as he baited African-American office workers into making statements that could be perceived as incriminating. There were also lesser-known but equally inflammatory  spectacles like the “affirmative action bake sale” O’Keefe and his conservative comrades held when they were students at Rutgers University. During the event, O’Keefe stood at a table in the center of campus offering baked goods at reduced prices to Latinos and African-Americans while whites were forced to pay exorbitant amounts. (Native Americans, he announced, would eat free.)

By O’Keefe’s own account, his racial troubles became acute when he entered the multicultural atmosphere of Rutgers University’s dormitory system. In an online diary that has since been scrubbed from the Web (but not before being captured on Daily Kos), he wrote that he was forced to live on an all-black dormitory floor after refusing to live with the gay roommate he was initially assigned. O’Keefe claimed his next roommate was “an Indian midget ... who smelled like shit.” The roommate left, however, and was replaced by “a greek kid.” The new roommate complained to a residential administrator that O’Keefe had called his neighbors “niggers,” prompting the school to expel him from the dorm. He rejected the accusation as a “complete lie,” writing, “I was lead out of the room crying and screaming at him and my situation, no friends, no one one [sic] to talk to, forced to go in front of a black man, Dean Tolbert, to defend myself and help explain that I did not call anyone any names.”

The following year, despite this record, O’Keefe secured a dream job in the conservative movement, employed by the Leadership Institute, a Northern Virginia-based outfit that serves as the movement’s most prolific youth training operation. There, O’Keefe met Marcus Epstein, a fellow ideologue who as editor of a conservative publication at the College of William and Mary assailed Martin Luther King Jr. for “philandering and plagiarism” and challenged his patriotism and Christianity.

In August 2006 Epstein planned an event that would wed his extreme views on race with his ambitions. Epstein invited white nationalist  Jared Taylor  and homophobic white-grievance peddler John Derbyshire of the National Review to speak at the Leadership Institute’s Northern Virginia headquarters, at a mock symposium called “Race and Conservatism.”

According to a post on the white supremacist Web site Stormfront, Taylor and Derbyshire debated "the role of race in policy decisions and the racial future of the Republican party."

When the Southern Poverty Law Center denounced Taylor’s participation in the event, sparking damaging publicity for the Institute, Epstein shifted it across the street, where he played host under the auspices of a “traditionalist” group he founded called the Robert A. Taft Club. O’Keefe joined him after the last-minute move. A speaker from the right-wing black front group Project 21, led by white conservative David Almasi, was added at the last minute.

According to One People's Project, which dispatched an undercover reporter to the event, about 40 people attended the event, including several white supremacists. They included Michael Hart, a Jewish astrophysicist and advocate of racially partitioning the U.S., who once clashed with David Duke at a conference over the Ku Klux Klan leader's anti-Semitism.

The event’s headline speaker, Jared Taylor, is the publisher of one of the white supremacist movement’s foremost journals, American Renaissance, which seeks to apply an academic gloss to the racialist screeds contained on its pages. According to a report on the conference published in Taylor's magazine, Taylor argued that a taboo against discussing the alleged criminal behavior and lower intelligence of blacks and Latinos twisted political discourse, and he advocated a strong white nationalism to counter it. Derbyshire denounced “this whole rickety apparatus of affirmative action, discrimination lawsuits, corporate shakedowns, profiling protests and 'speech codes.'” But the National Review editor expressed doubt that a sufficiently large white nationalist movement could be mustered to do much about it.

Epstein and O'Keefe moved on from the "Race and Conservatism" conference to better things. After graduating from the Leadership Institute, Epstein held jobs as executive director of both former Republican Rep. Tom Tancredo’s Team America PAC and Pat Buchanan’s American Cause. He also started a group called Youth for Western Civilization that dedicated itself to “defending the West on campus.” An essay featured on the group’s Web site complaining that “largely Jewish intellectual elites have utterly transformed American social and political discourse” suggested that Epstein’s outfit was only his latest attempt to push white nationalism and anti-Semitism into the conservative mainstream.

Epstein’s career unraveled in June 2009, when a violent racial assault he committed two years earlier was disclosed. According to a court affidavit, Epstein had karate-chopped a random African-American woman in the face and called her a “nigger” during a drunken late-night romp bar-hopping on Washington’s M Street in 2007, leading to his arrest by an off-duty Secret Service agent. He signed a plea bargain requiring him to attend alcohol rehabilitation courses and donate $1,000 to the United Negro College Fund as a token of his contrition.

Meanwhile, O’Keefe lost his job at the Leadership Institute in 2007 after a prank call he made to an Ohio-based Planned Parenthood clinic. During the call, O’Keefe offered a donation to the clinic on the condition that it would be earmarked to pay for aborting African-American fetuses. “Because there's definitely way too many black people in Ohio,” O’Keefe remarked to the receptionist. “So, I'm just trying to do my part.” Leadership Institute founder Morton Blackwell said O'Keefe's stunts went beyond the right-wing group's standards. “He wanted to do sting operations that would affect legislation; he made some calls which have been covered in the news media to Planned Parenthood," Blackwell told the New York Times. "That was beyond the scope of what we had hired him to do. We are an educational organization. We are not an activist organization.” Blackwell told O'Keefe he had to choose between his job and his activism, "and he said he was committed to the activism," according to the Times.

O’Keefe’s termination by the Leadership Institute hardly ended his career as a conservative activist. Right-wing online publicist Andrew Breitbart, hearing of the merry prankster’s exploits, hired him to carry out the ACORN operation that would make him famous. Since his arrest, however, some of O’Keefe’s former associates are scrambling to save face. "I am shocked by the reports of this behavior,” declared O’Keefe’s collaborator on the ACORN operation, Hannah Giles. (Giles had tarted up as a prostitute for the stunt.)

O’Keefe has now hired a defense attorney and is waging a high publicity battle against charges that could land him in prison for nearly a year. Some of his old allies, like Breitbart, remain in his corner. Fox News' Sean Hannity hosted O'Keefe for a sympathetic sitdown Feb. 1, where the young right-winger played victim, claiming he was being persecuted by "flat-out slandering" and "journalistic malpractice."