Will the real Meg Whitman please stand up? 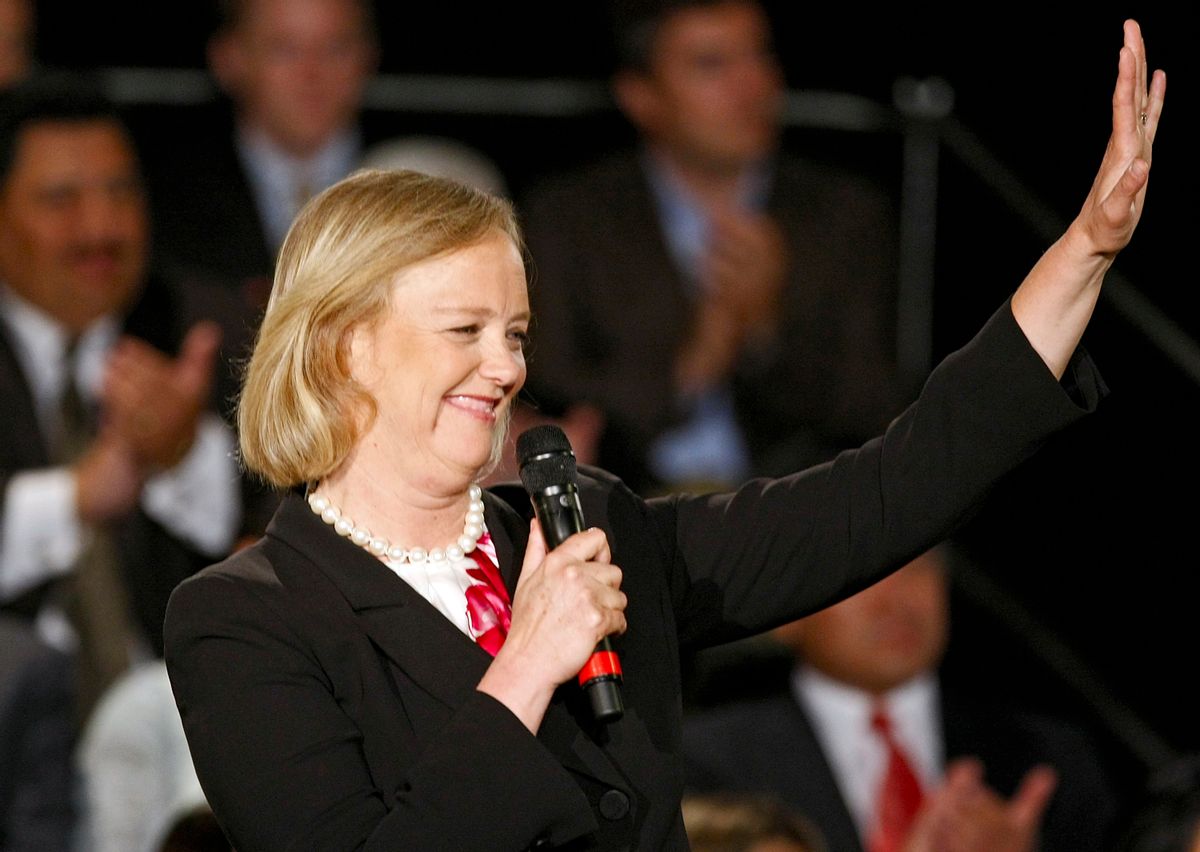 Jerry Brown has not gotten around to announcing that he is actually running for governor. Hands down, he would win, even if he announces his intention at the very last moment. He is that popular in California.

Brown seems to be letting the Republican candidates duke it out in the forum we all have grown to love (like speed bumps), the ever-present media -- the good, the bad and the very naughty.

The very naughty media (that is, Gawker) is running a trio of news blips about Republican hopeful Meg Whitman's sons, Griff and Will, and their alleged racist behavior at Princeton.  One or both seem to have been suspended at various times and allegedly use the billionaire entitlement card as often as possible. This information is supposedly reported by those anonymous people in the know. Does the unsubstantiated behavior of a candidate's adult (sort of) children matter?

Her husband, Griff Harsh IV, a neurosurgeon at Stanford, follows in his father's footsteps.  Griff Harsh III was also a neurosurgeon in Alabama, and his bio reads like that of a true, religion-driven conservative. Nothing wrong with that, except religion usually doesn't merit a mention in a professional bio. How far do apples Harsh IV and V fall from that tree?  And does it matter?

Whitman is well known for her support of Proposition 8 and her disinclination to support gay marriage. Only recently did she disavow any relationship with a former supporter, Santa Clarita Councilman and confirmed racist Bob Kellar. That intersection between disavowed and former supporter may be harder to travel than she thinks. If her Web site comments are any indication, Whitman is attracting the same kind of supremacist type followers that support Kellar.

Whitman's new book, "The Power of Many," ghosted by guest co-author Joan O'C Hamilton, is apparently a folksy read. Some say it is similar in style to another Republican we all know and adore, Sarah Palin. Though it just dropped last week, it languishes at No. 2,800 on Amazon.  The book is full of all kinds of reminders about why Meg is great and others are not.  We could call these Whit-icisms. She critiques Craigslist CEO Jim Buckmaster, going as far as to say that "the Craigslist Killer" is how this wildly popular alternative to eBay will be known in the future.

Moving on to Google, she chastises the founders for setting up a company with wildly attractive employee perks because it is doomed to disappoint when the perks are off the table in lean times. Perhaps no one has invited Meg to a lean-time lunch at Google lately? The perks live long. She sticks to these kinds of great insights throughout the tome.

Whitman recently mentioned her very introspective and reproving disappointment in Citizen Whitman. No. Not her errant children. Her own voting record. Until 2002 she wasn't even a registered voter.   And until 2007 she was registered without claiming a party. Her voting record is spotty. She blames it on her busy life as a wife and mother and moving so frequently.  Somehow the only thing that kind of excuse will elicit is a raised eyebrow from the millions of other moms who manage to vote and take care of their kids and homes. Sorry, Meg. That sucks for you.

As the candidates beat a path to the final stages of the primaries, the dirt is flying in their wake. Are Whitman's allegedly racist children an issue for the voters? Should her lack of civic duty before 2002 matter? Is her inability to firm up a date to debate her Republican primary opponents meaningful?

And where did the severance contracts for both Whitman (eBay) and Carly Fiorina (Hewlett Packard) say that they should take some of their parachute-millions and run for high office because they were once CEOs? Is there an MBA syllabus that instructs former CEOs to use those millions to run for office even if they’ve never seen the inside of a voting booth?

Jerry Brown is no Martha Coakley, but if he doesn't come out and show his intentions soon, some of us may be relocating to a planet other than California.