In an age of executive excess, this series is a poignant exercise in make-believe for the underpaid working classes 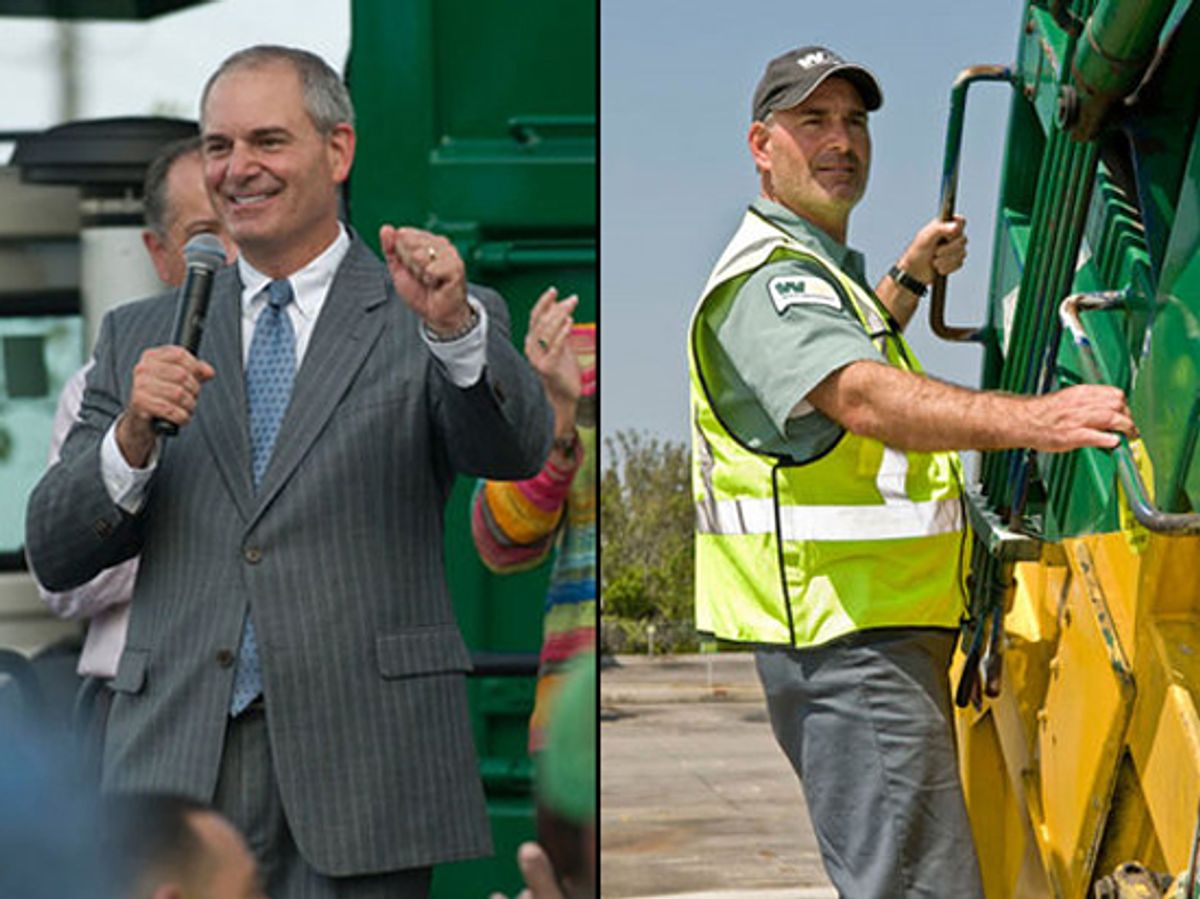 At a time when the gap between executive pay and the average worker's salary is painfully wide, CBS presents "Undercover Boss" (premieres Sunday, Feb. 7, after the Super Bowl), a touching fairy tale in which the boss man does menial labor shoulder to shoulder with his anonymous underlings. Of course, the real point of CBS's make-believe isn't to show how much the common man suffers from the indignities and injustices of blue-collar and administrative white-collar jobs -- although we do get some seriously depressing glimpses at the lifestyles of the not so rich and not so famous. No, the real point here is to demonstrate that the big man in the suit and tie is just regular folks like you and me -- you know, except for the fact that he spends half his day golfing and has about a thousand times more cash at his disposal at any given moment than we do.

Oh yeah, and his back hurts like crazy when he's on his feet all day. In other words, you'd have to have ice water flowing through your veins not to enjoy this elaborate P.R. experiment in spite of yourself. It's pretty tough to resist the heartwarming tale of Larry O'Donnell, president of Waste Management, who gamely agrees to pretend to be a new hire named Randy Lawrence who's training in several different low-level positions within his company. Larry is eager, he says, to get a closer look at how the business functions and what the experience of working its lower-level positions might be like.

And sure, Larry is likable enough in his role as a humbler, entry-level version of himself. He does seem to feel horribly guilty for the ways that his company's policies have been misused or misinterpreted by supervisors, leading to humiliation, inconvenience or overall job dissatisfaction of the ranks. One low-level supervisor runs to clock in after lunch to avoid having her paycheck docked by her boss; a trash collector pees in a cup while she's out collecting trash, because there's no time to stop and use the bathroom; a female office worker holds down four different positions at the company at once even though she's only paid for one job, and she's about to foreclose on her dream house. (Imagine how the company's publicists and the show's producers drooled when they wandered across that very timely P.R. gold mine.)

The workers involved all seem very capable. Larry, meanwhile, can't do much of anything right in his role as a regular working Joe. Delightfully enough, a supervisor named Walter fires Larry after watching him haplessly attempting to pick up trash on a littered hillside for just a couple of hours.

"Nice workin' with you, but you just don't have it," Walter tells Larry.

"Walter is the only person who ever fired me in my whole career," Larry says. Well, Larry, that's because you haven't technically been working all these years, nor have any of us who sit in front of our computers or talk on the phone or go to meetings all day long, not compared to what working-class people do all day. And when you see Larry in action, you sort of have to wonder how the man worked his way up the ladder in the first place. Meanwhile, Fred, a guy who cleans out Waste Management's porta-potties swiftly and efficiently without ever complaining about the work, a guy who coaches Larry enthusiastically all day long, seems like natural management material.

"We're like hunters, we see her prey, we creep up on it," Fred tells Larry the day they work together, referring to a cluster of portable toilets.

Larry is truly impressed with Fred's work. He really is. In fact, his experience doing these crappy jobs for his own company will forever change his management style -- that's what he tells a gathering of employees at the pep-rally-style conclusion of the show. And really, he does seem genuine when he says it. But short of seeing Fred promoted and watching as raises are awarded to every last one of the capable workers we met, should we care? Shouldn't all CEOs be forced to do the really bad jobs at their companies, so they understand how their passing decisions and cost-cutting maneuvers affect real human beings?

It would be nice if this sort of thing might happen without the cameras running. It would be nice if businesses simply started to police themselves, to take on a commitment to fairness and justice instead of simply answering to the board and the stockholders and the bottom line.

That's a little too much to expect -- or at least that's what the captains of industry and the Once-lers of all stripes tell us. So, instead, we'll have to soothe ourselves with publicist-invented fairy tales.