The Saints are America's team 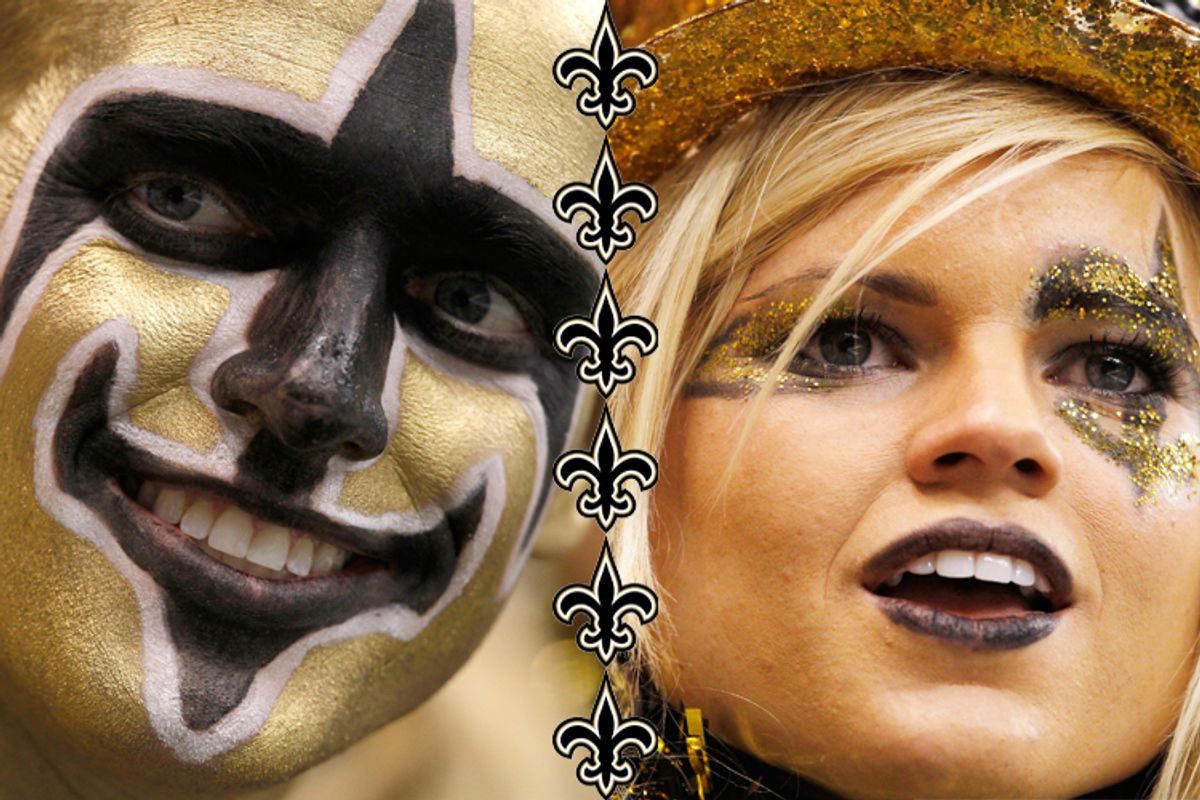 Two weeks ago, the New Orleans Saints played the Minnesota Vikings for the National Football Conference Championship. My wife and I couldn't watch the game alone -- we didn't want to bear the burden of defeat or experience the thrill of victory alone. Near kickoff, we drove the city's streets just before the game started and they were eerily void of people just as I remembered them when I returned to the city days after Hurricane Katrina struck. We arrived at the uptown home of some friends, just blocks from quarterback Drew Brees' house, and nervously ate the food and drink of this town. Our host had made a pot of gumbo, using a chicken he had fried and a dark roux. I separated yolks from egg whites, poured gin, heavy cream, simple syrup and orange flower water into my cocktail shaker and shook like crazy for a full minute to confect a round of Ramos gin fizzes, a drink invented in New Orleans more than a century ago. Despite our efforts, things looked grim in the fourth quarter. With the score tied and very little time on the clock, the Vikings had the ball, were in field goal range, and could take the game with a decent field goal kick. But we sipped our fizzes for good luck and a flag was thrown against the Vikings for something called "12 men in a huddle," an unlikely mishap for the polished team, driving the Vikings back beyond field goal range, which forced overtime, where the Saints won possession on the coin toss and took the game with a field goal.

We ran out onto the streets and our cries of "Who dat!" -- the cry of the Saints fan -- were answered back with who dats from neighbors engaged in their own celebrations. We drove home through streets rich and poor that were now filled with revelers spilling out of bars or screaming from their front porches. We honked at cars, families and jovial street mobs to share our joy. When we got home, the honking, yelling and fireworks (or were they gunshots?) were audible for hours. The New Orleans Saints had defied expectations and were going to the Super Bowl for the first time ever.

The winning field goal occurred in New Orleans' emblematic Superdome, a giant concrete spaceship that landed in New Orleans' business district a few decades ago and which had been, up until Hurricane Katrina, principally indentified as the home field of the hapless Aints, as the Saints were known during their early history of defeat and disappointment. The city of New Orleans has been, as observed recently in the New York Times, in a simultaneous struggle since the team's inception. It lost 200,000 residents during the team's first four decades, huge areas of the city were surrendered to blight and crime, the city lost almost all of its big businesses, and racial divides cleaved the city's residents and divided the mostly black city from its mostly white suburbs. And this was all before Hurricane Katrina when the Superdome became the site of one of America's biggest failures when desperate, mostly black citizens, abandoned in a city that had succumbed to catastrophic flooding, due more to poorly maintained and engineered levees and infrastructure than to the storm’s might, gathered for the world to see. Rumors of murders and rapes among the masses in the Superdome circulated quickly. By the time FEMA and the National Guard arrived and evacuated the entire city, the Superdome was no longer a sports field, it was a memorial to America’s persistent failure to address racial inequality, human misery and civic collapse.

I have beat this drum for almost five years since the storm, trying to tell anyone who will listen that the things they saw after Hurricane Katrina, the things that disgusted and disappointed them, were not created by the storm but exposed by it and that similar ugliness existed not far from their homes, in forgotten cities from Richmond, Calif., to Camden, N.J., and everywhere in between. And I still insist that New Orleans' recovery is a bellwether for American democracy and, as New Orleans goes -- good or bad -- so goes the country. All of this is why it is difficult for me to say that a winning field goal kick in a football game has changed things at all. But it has. The kick brought the citizens of this city and region together in a way that the common experience of displacement and loss following Hurricane Katrina had failed to do.

Whether you are listening to the black talk radio station, WBOK, where hosts are apoplectic about the possibility of the election of a white mayor, as seems likely, or WWL radio, whose white flight listeners seem to never tire of calling in to disparage the city, everyone comes together about the Saints. The Times Picayune, where the politics of the "white vote" and the "black vote" have been written about a lot recently, ran the headline, "New Orleans Saints Fans Build Color-blind Bonds in Who Dat Nation," with the lede,

In a place where music and food can break down racial barriers but true dialogue between the groups is rare, nearly universal joy over the Saints' newfound success has created a new common language and solidified a shared identity.

The entire region rallied this week in mass, anti-corporate mania when the NFL tried to claim that "Who Dat" was the intellectual property and registered trademark of the NFL and threatened several New Orleans retailers who sold Who Dat merchandise. After receiving nothing but bad press and condemnation -- summed up by a smart blogger's exclamation, "Hey NFL, Bleaux Me"  -- the NFL backed down and local T-shirt shops sold out of anything with the words "Who Dat" on it.

Hurricane Katrina exposed our deepest divides, and the "recovery," such as it is, has in many ways only heightened the balkanization of this town and region. Things are not "better" here. The murder rate remains out of control, the city's coffers are empty, the levees remain questionable, the wetlands that buffer the city from hurricanes are deteriorating, and the viability of many of the city's neighborhoods is very much in doubt. But the Saints have, at least momentarily, brought us together and given people a sense of common purpose.

After the game, on Monday, or Tuesday, or Wednesday, or whenever the postgame celebration or sad hangover of loss ends, we all know that the city and region will still be laden down with problems and animosities. But on Sunday, the streets of New Orleans will empty again and people will huddle around televisions in the company of fellow Saints fans, people of all stripes including old school Who Dats and recent convert New Dats, like my wife and me. Our team, like our city and its people, are the underdogs in the game. So we will eat gumbo and hope. And if we are lucky, if we get another good coin toss after all of the bad ones for so many years, we will drive home again watching strangers hug in the streets, seeing everyone joyous and together, without regard for the usual divides, and the city can shake off some small part of what it struggles with and what has so fractured it. As with all the tragedy here, if some measure of unity and recovery can happen in New Orleans, it's possible anywhere in this country.

So forget the Cowboys. These Aints turned Saints are America's team. Root for them and root for yourselves.