Toyota's flagship hybrid may have a software bug in its braking system. U.S. carmakers can't believe their luck 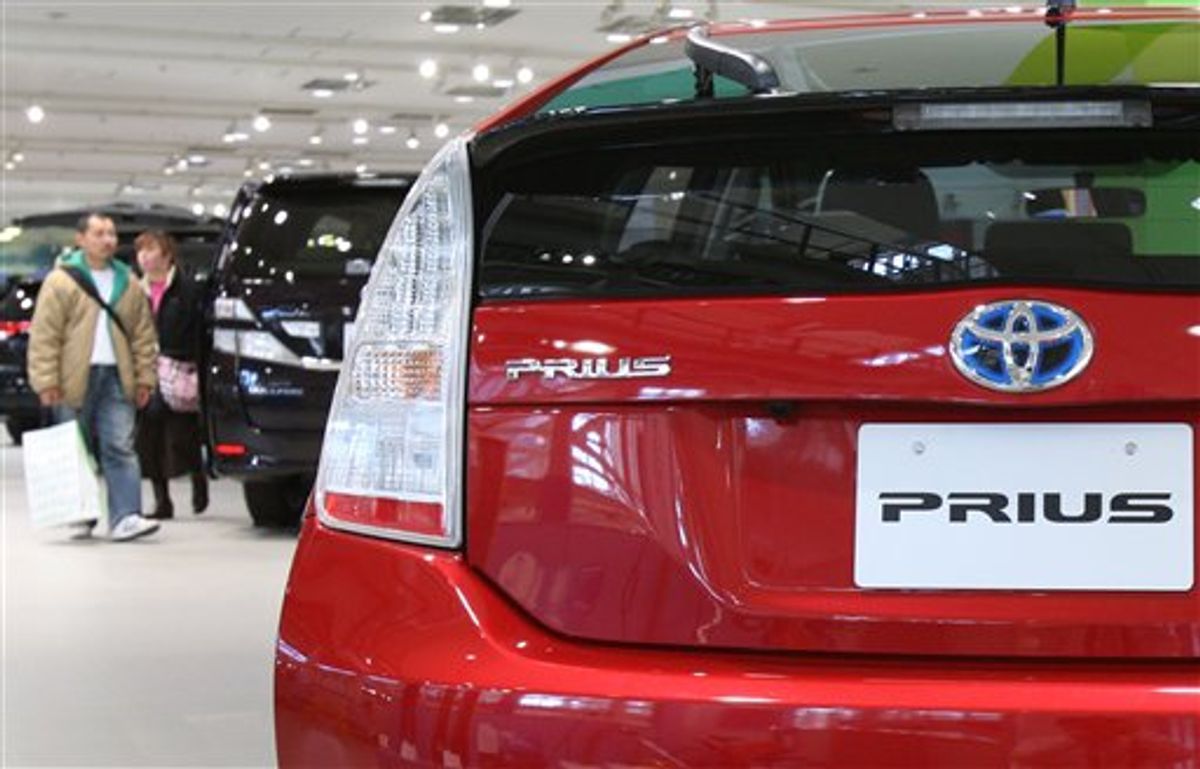 Are we witnessing a momentous shift in the history of the auto industry? Toyota's massive recall of more than six million cars in the U.S. market, due to floor mat and accelerator pedal problems, has already seriously dented the carmaker's sales. Its handling of the crisis, from a P.R. perspective, is getting terrible reviews. Some analysts are warning that it could take a "generation" for Toyota to recover its reputation.

And now comes the news that the Japanese government has ordered an investigation of braking problems with the 2010 Prius, currently Japan's top-selling car. A Toyota representative is quoted by Bloomberg as stating that "the possibility of a recall is not zero." The Prius -- that icon of high technology -- may have a software bug in the braking system.

The Wall Street Journal reports that last fall, Toyota started receiving reports that in certain road conditions, the 2010 Prius experienced a slight delay switching from regenerative braking to hydraulic braking. So a decision was made to tweak some code.

In Toyota's first news conference on the emergence of the Prius brake complaints, Hiroyuki Yokoyama, Toyota's quality general manager, said that in late January it rewrote the braking-system software following an increase in complaints in December. The Prius cars assembled since then all carry the modified version of software in their braking systems, but the company has yet to decide on whether and how to rewrite the programs on the cars it has already sold, he added.

Let's put aside for now the unsettling realization that modern cars now bear an unsightly resemblance to beta versions of software. (How long before we're driving 80 miles per hour down the freeway and our car suddenly informs us that it needs to update the operating system?) It just can't be confidence boosting to owners of Priuses bought before late January that they are driving cars with buggy brakes. That doesn't really fit with the oft-praised "Toyota way."

The real news here is that Toyota's woes are a boon to U.S. automakers more helpful than anything the U.S. government could dream up. A crack in Toyota's heretofore invincible reputation for quality is something U.S. carmakers have been fruitlessly awaiting for generations.

Consider it a lesson in the contingent nature of economic fortune. Toyota's stumble will make Cash for Clunkers look like a bake sale. Who needs a bailout, when all you really have to do is wait for your fiercest competitor to drive off a cliff?

UPDATE: The U.S. Department of Transportation has launched its own investigation of Prius braking problems.

How The World Works Toyota