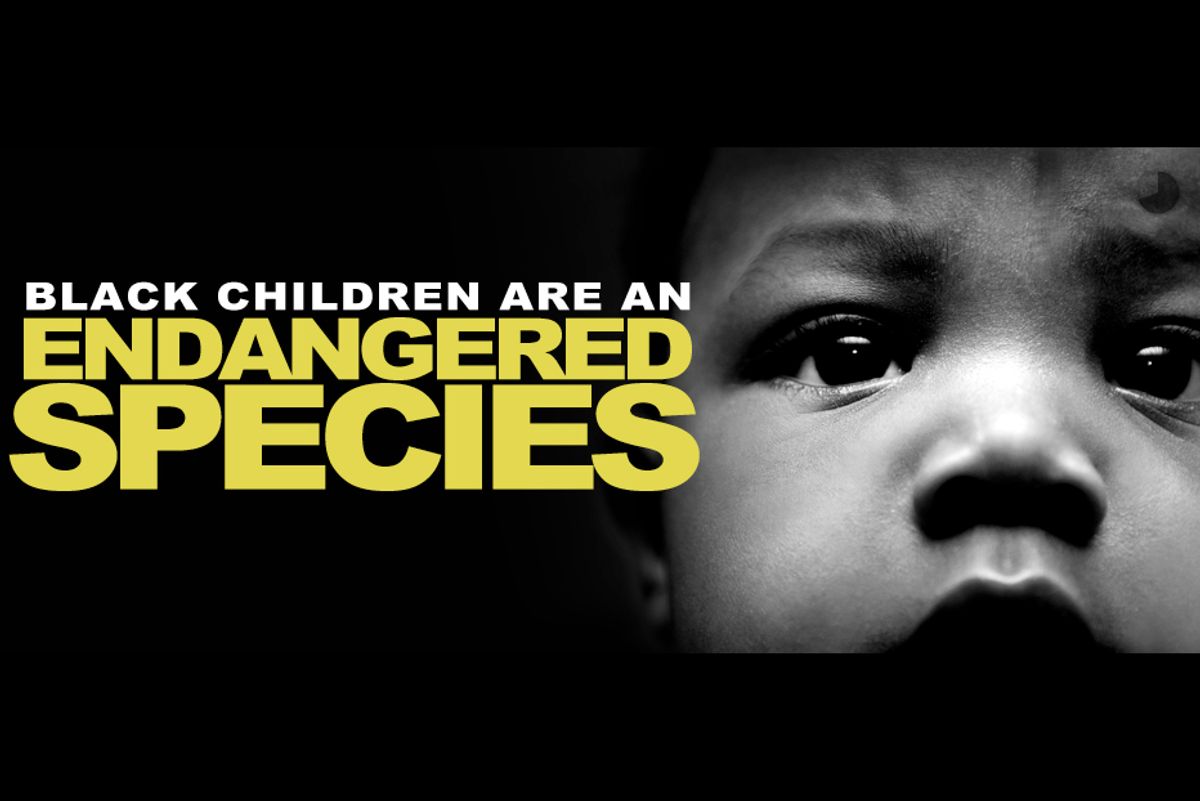 The baby's face is a picture of perfection -- smooth, dark skin, big brown eyes and irresistibly pinchable cheeks -- but his wrinkled eyebrows hint at despair. The words bordering his face explain why: "Black children are an endangered species." This is the antiabortion billboard going up in minority communities throughout Georgia as part of the Endangered Species Project, which launched Thursday. It's the brainchild of Georgia Right to Life and the Radiance Foundation, and carries on anti-choice activists' attempts to spread the lie of a "black genocide" at the hands of Planned Parenthood.

The campaign has also posted commercials on YouTube, one of which (found below) features a funky beat and a series of "facts" about African-Americans and abortion. For instance, a quote from Margaret Sanger, founder of Planned Parenthood, appears on-screen: "There is no doubt ... that the procreation of this group should be stopped." It's true, Sanger said this, way back in 1921 -- but she was talking about birth control (i.e., the prevention of pregnancies) and the "group" she was referring to wasn't African-Americans, as the ad implies, but rather the "irresponsible and reckless" members of society who have "little regard for the consequence of their acts, or whose religious scruples prevent their exercising control over their numbers." Of course, that isn't to say that her comment is uncontroversial! She remains a very divisive figure today because of her belief in negative eugenics, but Sanger consistently resisted racial applications and found a vocal ally in Martin Luther King Jr.

You can disagree with Sanger's personal philosophy, but you can't legitimately argue that she was lobbying for a black genocide, or that her plan is being carried out today by Planned Parenthood. I mean, the best evidence these folks have is a 90-year-old quote taken completely out of context. (Still don't believe me? Check out this thorough debunking of the myth.) That doesn't stop them, though -- the ad goes on to toss out some dramatic figures: African-American women account for 38.5 percent of abortions every year, and black women abort pregnancies at three times the rate of white women. Cue the big finale: "Coincidence? Sanger's Birth control plan is succeeding." Right, OK. It doesn't have anything to do with the fact that black women's unintended pregnancy rates are the highest of all racial groups in this country. And that doesn't have anything to do with African-Americans' lack of access to high-quality reproductive care, comprehensive sex education and reliable contraceptive methods ... which certainly doesn't have anything to do with persistent and pervasive racial injustice in this country. Nope, just blame it on Sanger.