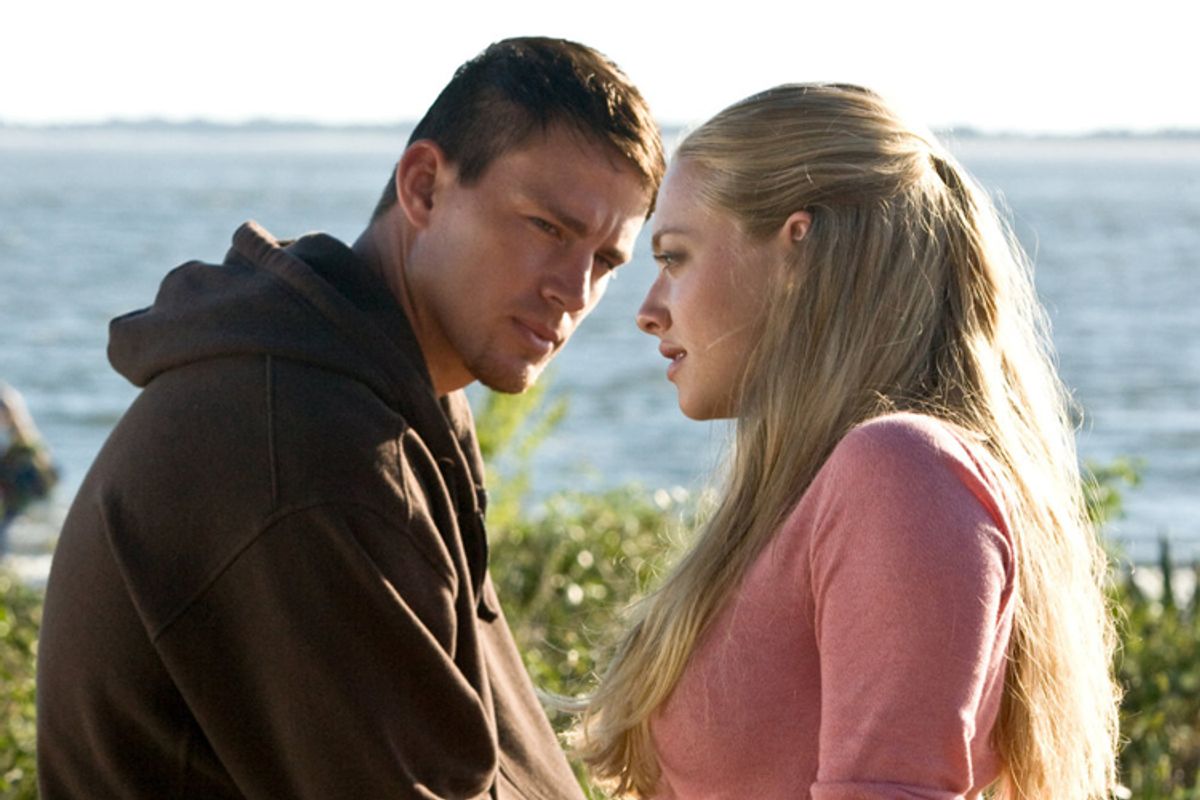 Long before there was even such a thing as movies, there have been stories about young lovers who are separated when one goes off to war. Historically, it's usually been the man, although in real life that's changed these past few years. But oddly enough, our most recent wars haven't inspired much in terms of wartime melodrama. It's as if we've somehow become too grown-up, too sophisticated, to allow ourselves the luxury of feeling something for fictional characters caught up in the issues -- personal and emotional ones, specifically -- our current wars present. Maybe we've decided, as a culture, that spilling too much emotion over the subject might be a source of embarrassment, even though it's also entirely possible that one of the subtler roles of melodrama is to help us sort out our feelings about complex and painful world events.

In the past few days and weeks, I've heard lots of derisive snorts about Lasse Hallström's "Dear John," including plenty of snide comments about its being "just another chick flick." But I think the movie fits more comfortably, without compromise or apology, into the category of wartime melodrama. And even though it's set, relatively speaking, in contemporary times -- the story opens in the months before 9/11 and takes us to the present day -- in its mood and feeling (though not in its style or execution) it has more in common with '40s wartime dramas than it does with any other recent war-related movie I can think of. The characters in those movies look like grown-ups (and many of them are full-fledged adults), but those stories frame the possibility of loss and heartbreak in such dramatic terms that they feel youthful at their core. "Dear John" is like that, too, reminding us in very stark visual terms that it's mostly young people, very young people, who go to war. Just looking at the faces of its two stars, Amanda Seyfried and Channing Tatum, brings that home. In our culture, it's a luxury to be young and beautiful. But for these characters, it also means they have plenty to lose.

Tatum plays John Tyree, a quiet and polite Special Forces soldier who's on leave visiting his father (played by Richard Jenkins) in South Carolina. There he meets Savannah Curtis (Seyfried), a friendly, pretty and idealistic college student on break. The two begin dating, tentatively -- their attempts to get together are so cautious, you could almost call what they do courting. Savannah comes from a privileged family; John doesn't. But the two become very close in a short period of time. Savannah gets to know John's father, a remote and complicated man. And John becomes friendly with a longtime friend of Savannah's, Tim (Henry Thomas). When John has to return to duty -- the wars in Afghanistan and Iraq have not yet begun -- he and Savannah vow to keep in touch.

They do, mostly by letter as opposed to e-mail, because John is often stationed in places where there's no Internet access. And so, even though they're separated by thousands of miles, their love grows stronger, until, suddenly, there's an unexpected complication -- or, perhaps more accurately, a complication pileup. It's not so much that tragedy intervenes -- it's more that life just gets in the way. "Dear John" is based on a novel by Nicholas Sparks, who's often characterized as a schmaltzy crowd-pleaser. But his books tend to make good raw material for movie melodramas that people respond to in deep and conflicted ways: I know many grown-ups (men and women) who have a secret, or not-so-secret, love-hate relationship with "The Notebook," Nick Cassavetes' adaptation of the Sparks novel by the same name. And George C. Wolfe's "Nights in Rodanthe" was a sweeping romantic melodrama for, and starring, adults: It was a pleasure to watch Richard Gere and Diane Lane, real-life middle-aged people, play characters who didn't have to be embarrassed or apologetic about feeling romantic passion.

"Dear John" is more about the young, although Hallström's ideas about how to frame a melodrama are seasoned and old-fashioned in the best sense. I'll warn you that the story does take some turns that veer dangerously close to sentimentality: We learn that the sweet, openhearted (though also extremely intelligent and direct) Savannah dreams of one day working with autistic children. And John offers a monologue about coins, with a somewhat heavy-handed metaphor embedded, that comes disastrously close to being overwrought.

But Hallström forges through this material boldly, acknowledging that he wants our emotions (and maybe our tears) to flow freely; he doesn't buy the idea that tasteful restraint is preferable to openheartedness, and his approach is refreshing. There are things in "Dear John" that I've probably seen in movies before, though I can't recall an explicit instance: At one point Hallström shows us a container of mail floating down via parachute. It lands on some godforsaken patch of Earth where John and the members of his team are stationed, and they all run toward it. As they paw through the contents, they're ecstatic if they've gotten a letter and despondent if they didn't. Could there be a better, simpler image to represent elusive notions of isolation and connection?

Hallström seems to grasp intuitively the strengths and weaknesses of his actors. Seyfried's performance is lovely. Her character may be sweet, but she's also marvelously direct, two qualities that Seyfried holds in balance perfectly. It doesn't hurt that her face, with its enormous, slightly tilted eyes, looks like one of those old composite drawings of creatures from other solar systems that you used to see in books about alien abduction -- there's something about Seyfried's face that's not quite of this world, though everything else about her is unequivocally human.

Tatum, on the other hand, is a good-looking but limited actor. He's fully believable here -- the problem is that there's nothing compelling about him. But late in the movie, he plays a starkly emotional scene with an extraordinary delicacy that I wouldn't have thought him capable of. I hold that moment as an example of the way even actors with a limited number of colors in their palette can still spring surprises on us. It is, or should be, part of the reason we bother going to the movies.

When I was a kid, my older sister -- she was 15 at the time -- had a slightly older boyfriend who joined the Army and would eventually be shipped off to Vietnam. This was in the late '60s, when just about everybody under the age of 20, it seemed, was busy singing soft, gentle folk songs while accompanying themselves on acoustic guitar. Rick, my sister's boyfriend, did this too, and I remember spying on the two of them as they'd sit together in our family's living room.

There's a scene in "Dear John" in which Savannah sings a quiet, lilting song to John, accompanying herself on guitar. I looked at this scene with amazement: Do young people still do this sort of thing? It's entirely possible they don't. This could very well be something that Sparks or Hallström or Jackie Linden, who adapted the screenplay, has dreamed up from the depths of some long-forgotten memory. But the realism -- or the unrealism -- of the moment isn't what matters. What Hallström and his actors are showing us is, simply, a preamble to a separation. I'm fully prepared to hear people write off "Dear John" as corny, sappy, a movie for chicks. But I'd counter that Hallström's old-fashioned idealism about art and emotion is the more important quality shining through "Dear John." Maybe it's corny only if you've managed to reach adulthood without ever having to say goodbye.