Flying blind across the ocean

Your pressing questions about landing gear and windshield wipers. Plus: Ain't no room for Ask the Pilot imitators! 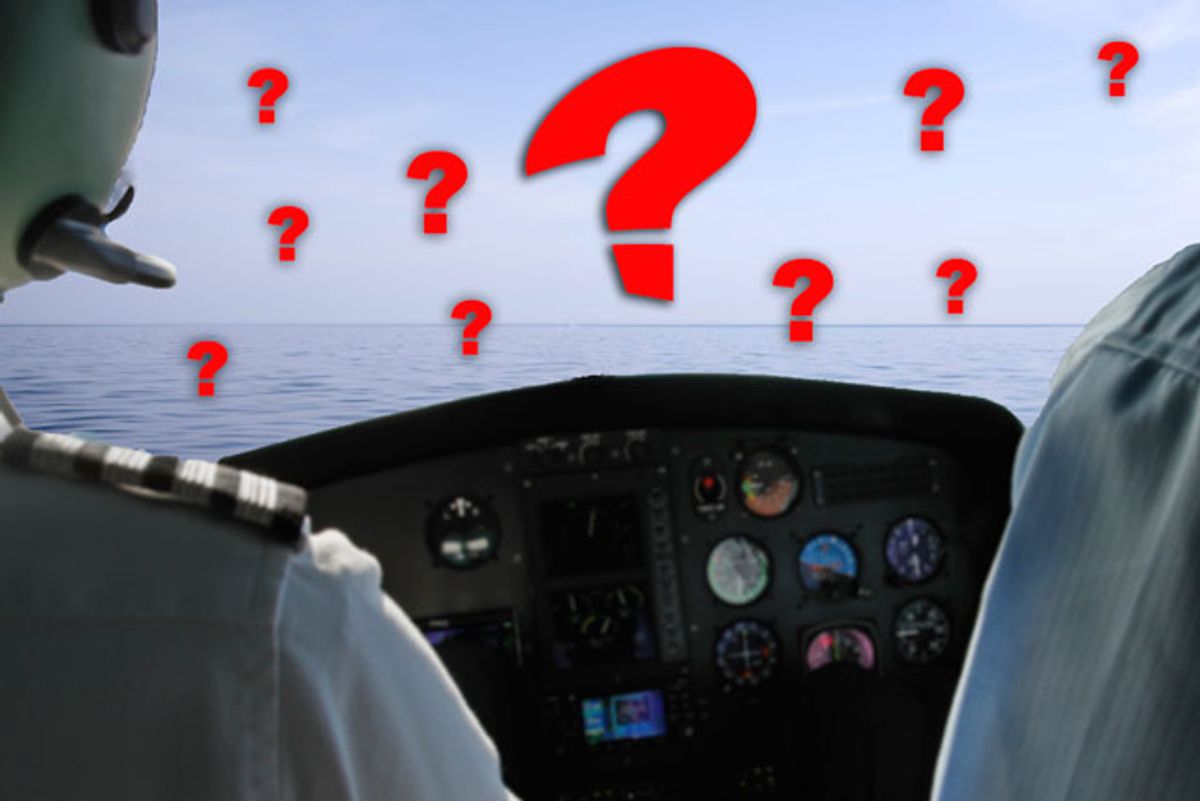 What's that old saying about imitation and flattery?

I ask because the New York Times Freakonomics blog, hosted by authors Steven D. Levitt and Stephen J. Dubner, has acquired its own resident pilot, one "Captain Steve, an airline pilot for a major U.S. carrier, who will be regularly fielding your questions about any and all aspects of air travel."

I love the reader comments exclaiming what a great and novel idea this "ask a pilot" feature is. Now, why didn't I think of that?

What's funny, sort of, is that Dubner himself once contributed a complimentary blurb on behalf of my book and my work on Salon. "I wish I could fold up Patrick Smith and put him in my suitcase," he wrote. "He seems to know everything worth knowing about flying."

Now, to be clear, I'll take a seat in coach any day rather than share a Samsonite with Dubner's smelly socks, but still I'm flattered. Or, I was flattered, before this "Captain Steve" came along and stole Dubner's heart.

Listen, "Steve," this cannot stand. I'm afraid there's only room for one of us in this cybertown. I propose a duel.

Right away I get bonus points for using my full name, generic as it is, but let's put our answering skills to the test. We'll both reply to 10 commonly asked questions about commercial flying, and allow a panel of impartial readers to vote on whose answers they like better. The winner gets bragging rights and perpetual domain over the racket of providing online air travel expertise. No more knockoffs.

I see that you've already tackled the controversy over air quality in aircraft cabins, as have I. Here's your answer...

Allow me to submit the rest ahead of time. How about a heady dissertation on turbulence?

Or, should it come down to a tiebreaker, how about Steve and I square off in a battle of memoir and storytelling? Like this. Or this.

That's the thing. This will be easy for me. I have discussed and re-discussed pretty much all of the most frequently asked questions posed by frequent (or nervous) fliers, and my explanations tend to be a lot longer and more comprehensive than Steve's. I can simply recycle my best material. In fact why have the contest at all?

Do I sound even more insufferable than usual? I thought so. What I'm trying to say, of course, is that yes, I'm jealous. Can't help it. I was first at this, and I'm rather territorial about it — to a fault probably, as even kidding around I manage to sound like a pompous, petulant jerk.

We've been through this before, some of you might remember. A few years ago, USA Today came up with the not-at-all derivative "Ask the Captain" column, hosted by Meryl Getline, a former United Airlines pilot. Getline wasn't around for very long, unable to compete against my singular blend of trenchant insight, captivating eloquence, keen humor and shameless self-promotion.

Either that or she just got sick of it.

Not me, though. I never run out of fun things to talk about. Even on those occasions when I need to replay some old, previously covered topic (airport security, for one) there's always fresh interest. It's the nature of the business, I suppose. Plainly put, commercial flying is a secretive, sometimes frightening realm that nobody likes, nobody trusts, and yet everybody takes part in. It's fish in a barrel.

Let me give you some advice, "Steve." First, if there's a golden rule to this gig, it's this: Never, ever underestimate the traveling public's disdain for the airlines and its willingness to believe almost every false rumor, exaggerated story and conspiracy theory. A majority of what the public presumes about commercial flying is based on bad information. Conventional wisdom is, for the most part, wrong.

And here's a timesaving tip: You will receive many, many e-mails beginning with the words "Is it true that..." You should have a template e-mail standing by at all times, politely informing the reader that the answer is no.

Is it true that jetliners have windshield wipers?

I mean yes. This might strike you as quaint, but most airliners are indeed equipped with wipers.

They're used on the ground, and during takeoffs and landings if precipitation is heavy. They are effective at keeping the windscreen clear, but tend to be very noisy. Usually there is a speed restriction (around 200 knots, give or take), above which they should not be turned on. Some planes use a system that instead blows engine-bleed air across the glass.

Cockpit windows are also electrically heated to prevent ice and frost accretion. The individual panels use separate circuits and heating elements so that a failure will affect only one section. Heating also increases flexibility, providing extra protection against bird strikes. The glass is unbelievably strong — bank-teller thick and bolstered by high-strength frames. I once saw a video of maintenance workers attempting — and failing — to shatter a discarded cockpit windscreen with a sledgehammer.

If that all sounds expensive, it is. Swapping out a single cockpit pane can run tens of thousands of dollars.

It has always puzzled me why airliners deploy their landing gear so long before landing, yet tuck it away almost immediately after lifting off. I understand the idea of eliminating drag on takeoff, but dropping the wheels so soon must subject them to a lot of stress from the airstream.

Actually, putting the gear down early is a useful tool to help slow down or descend. However, planes normally drop their undercarriage at somewhere around 2,000 feet on final approach. Mainly it's just to be certain that everything is steady and stable at a reasonably early point. Lowering the gear has a significant aerodynamic impact — mainly in the adding of wind resistance (that is, drag) — thus requiring power and pitch adjustments to maintain speed, altitude or rate of descent. It's best to have that out of the way early on to help establish what pilots call a "stabilized approach." Deploying the gear close to the runway could cause a sudden shift in airspeed and attitude exactly when it's critical not to have a sudden shift in airspeed and attitude.

On takeoff, however, this works to a plane's advantage. Remember, the moments just after liftoff are the most critical moments of any flight. The plane is making the transition from ground to air, and margins are relatively thin. The more help it can get — such as eliminating the drag caused by dangling landing gear — the better. On approach, by contrast, flight is well established and the margins much fatter.

All planes have maximum speeds for deployment and retraction. Airstream stress is more of an issue for the doors than for the gear assembly itself. For this reason, some of the doors will open as the gear comes down, then close up again.

In last week's column you alluded to the fact that airplanes crossing the ocean are not under radar coverage from air traffic control. I found this surprising, and even a little scary. How are transoceanic flights kept safely apart?

The best example of how this works is the North Atlantic Track (NAT) system, used to coordinate the hundreds of aircraft that travel daily between the United States and Europe. Out over the ocean, flights are not under radar control, but they are on assigned routes — or tracks, as we call them — made up of connected points of latitude and longitude, with a "gateway" fix at either end where you transition to and from the normal radar environment.

The tracks are constructed differently each day, depending on weather and winds. Ordinarily there are six or seven of them, designated by letter, 60 miles apart. Vertically, aircraft are separated by a minimum of 1,000 feet. Here's a map showing what they look like. In the evening, traffic on the tracks is west-to-east only. During the morning and afternoon, another set is constructed, and traffic flows the other way.

Flights are cleared and sequenced along the tracks based on speed and time. At each latitude and longitude fix, you make a position report to whichever controlling agency's jurisdiction you're in (Gander, New York, Shanwick, and so on). These reports include the exact crossing time, altitude, fuel and ETA to the next point. The reports are made by voice using HF radio, or automatically via on-board datalink, depending which equipment the aircraft has.

Altitude or routing changes must be coordinated with the controlling facilities on either end. In an emergency, the crew follows a prescribed series of steps in order to safely clear the track system and divert. A similar system is used over the North Pacific.

In areas of the world without organized tracks, or when flying in the direction against the track flow, planes follow "random routes." Randoms are essentially the same thing — a string of latitude and longitude fixes along which crews make position reports — but the clearance and communications protocols aren't quite as rigid.

Media note: On Tuesday, Feb. 9, the PBS show "Frontline" will air a special episode focusing on regional airline safety, coinciding with the first anniversary of the Colgan Air/Continental Connection crash outside Buffalo, N.Y. Former CNN commentator and aviation enthusiast Miles O'Brien will be the host.

Please let me know how it goes. I'd love to watch, but, well, y'know, prior commitments. Tuesday is scrub-mildew-from-the-shower night. Really, I suppose that in some respects it's my duty to watch, and the show's publicity people were kind enough to offer me an advance copy. Meanwhile, I've been a "Frontline" devotee for 20 years, and if anybody is bound to do a good job, it's them. However, history has taught me to be very wary of such projects, no matter how nobly attempted, and I can't spend another night screaming at the television and writing letters.

Jealousy again. Feel free to watch on my behalf. Just don't tell me if they screw something up.

Do you have questions for Salon's aviation expert? Contact Patrick Smith and look for answers in a future column.