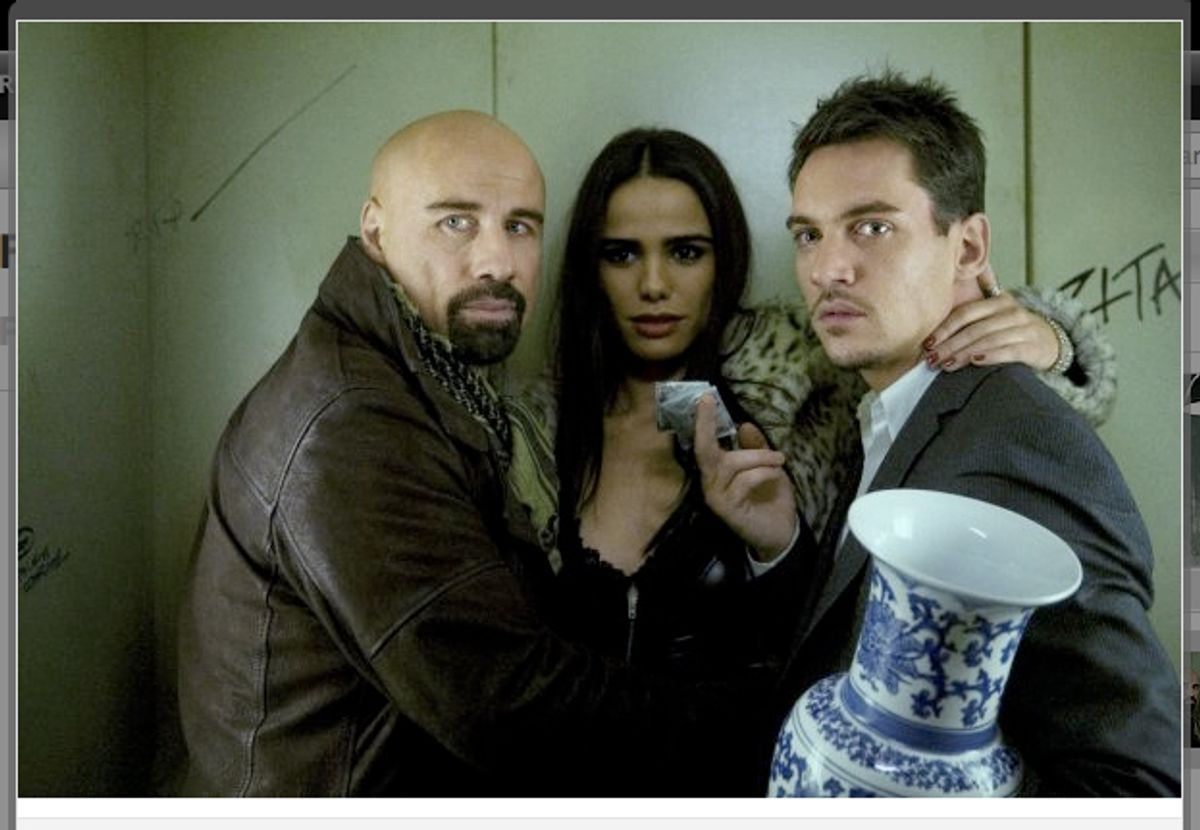 John Travolta, Melissa Mars and Jonathan Rhys Meyers in "From Paris With Love."
--

There's so little love in "From Paris With Love" that the title doesn't even register as the sick, playful joke it's intended to be. The picture is supposedly an action-comedy, a buddy picture in which two mismatched souls -- Jonathan Rhys Meyers as a nerdy wannabe CIA agent, John Travolta as a bald, bearded, burly soldier of fortune who swaggers into Paris to thwart a planned terrorist attack -- force their clashing personalities on one another, piling up sardonic laughs and bullet-riddled bodies along the way to that inevitable "I love you, man" hug.

But the picture, directed and written, respectively, by Pierre Morel and French cinema's woolly-bear wild man Luc Besson, is both mean-spirited and self-conscious. It's all style and no soul, which wouldn't be a problem if its style at least gave us something to look at, or to laugh at. But "From Paris With Love," filmed on location in Paris, has a raggedy, greasy, dingy look: It's the movie equivalent of an unbathed, unshaven French boyfriend (the bad kind). It thinks it's suave, but it just smells bad.

Morel and cinematographer Michel Abramowicz open the movie with postcard-pretty views of Paris before sidling into the city's seedier back alleys and junk-vendor cluttered streets, a choice that makes sense in terms of the story but still feels like visual punishment. Rhys Meyers' James Reese belongs, at first, in the more beautiful Paris: He works as a personal aide to the U.S. ambassador in France, but he moonlights as a low-level CIA operative, hoping to move up in the ranks until he's a full-fledged spy. James, twitchy and nervous despite his attempts to appear cool and elegant, tends to botch, or almost-botch, his simple assignments: When he attempts to plant a tiny microphone beneath a table in a bigwig's office, cleverly using chewing gum as an adhesive, the little thing just refuses to stick -- James is less special ops than special oops.

But he's an optimistic fellow, and he's thrilled when he gets what he believes is a special assignment: He drops everything -- that is to say, he walks out on the romantic dinner his foxy girlfriend, Caroline (Kasia Smutniak), has just prepared for him -- to meet his new partner, loose cannon Charlie Wax (Travolta). James does everything by the book; Charlie shreds the book and eats it for breakfast. Together they set off on a supposedly raucous spree of violence, during which the sight of James' being shocked and appalled by Charlie's confident recklessness becomes a recurring motif.

And a tiresome novelty. Charlie and James waste no time tracking down and picking off baddies, but there's no suspense in the storyline, no buildup of tension. The action sequences are noisy and brutal without being particularly exhilarating. A bloodless gunfight in a mannequin factory results in lots of shattered plaster body parts and broken glass, but the aggressive kineticism of the staging amounts to nothing: The sequence just comes off as flat and dull.

Part of the problem is the forced chemistry between Rhys Meyers and Travolta. Rhys Meyers' James skulks through the movie in a faux-James Bond suit that gets more battered with each passing misadventure; Travolta's Charlie, with his gleaming shaven head and meticulously outlined goatee, cuts his way through the picture with an outsize swagger. But even as they rib and pick at each other, they seem to barely look at one another. Their ultimate bonding moment is nothing more than the forced conclusion we've seen coming since the beginning. Charlie spouts supposedly clever lines ("Wax on -- Wax off!") that practically have "possible catchphrase!" scrawled across them in Sharpie ink. At one point he revisits the "Royale with cheese" gag from "Pulp Fiction," and the moment feels like a desperate grab at nostalgic cachet.

At its lowest, meanest moment, "From Paris With Love" steals a shockeroo tactic from "Taken," the last picture Morel and Besson made together. (They also collaborated on the crazily entertaining "District B-13.") But the recycled bit is out of place here; it's neither funny nor surprising nor disturbing -- it's merely ugly. "Taken" was disreputable, cheap and unabashedly fun, largely for the way it reveled in its poker-faced seriousness. Former CIA guy Liam Neeson rescuing his daughter from a high-toned sex-slave ring? Now that's a man with a mission. In "From Paris With Love," it's hard to know exactly what these Mutt and Jeff heroes are up to, and even harder to care. "From Paris With Indifference" is more like it.

From Paris With Love Movies