Week four: Dresses are covered in the soup company's branding. Oh, and it has something to do with heart disease 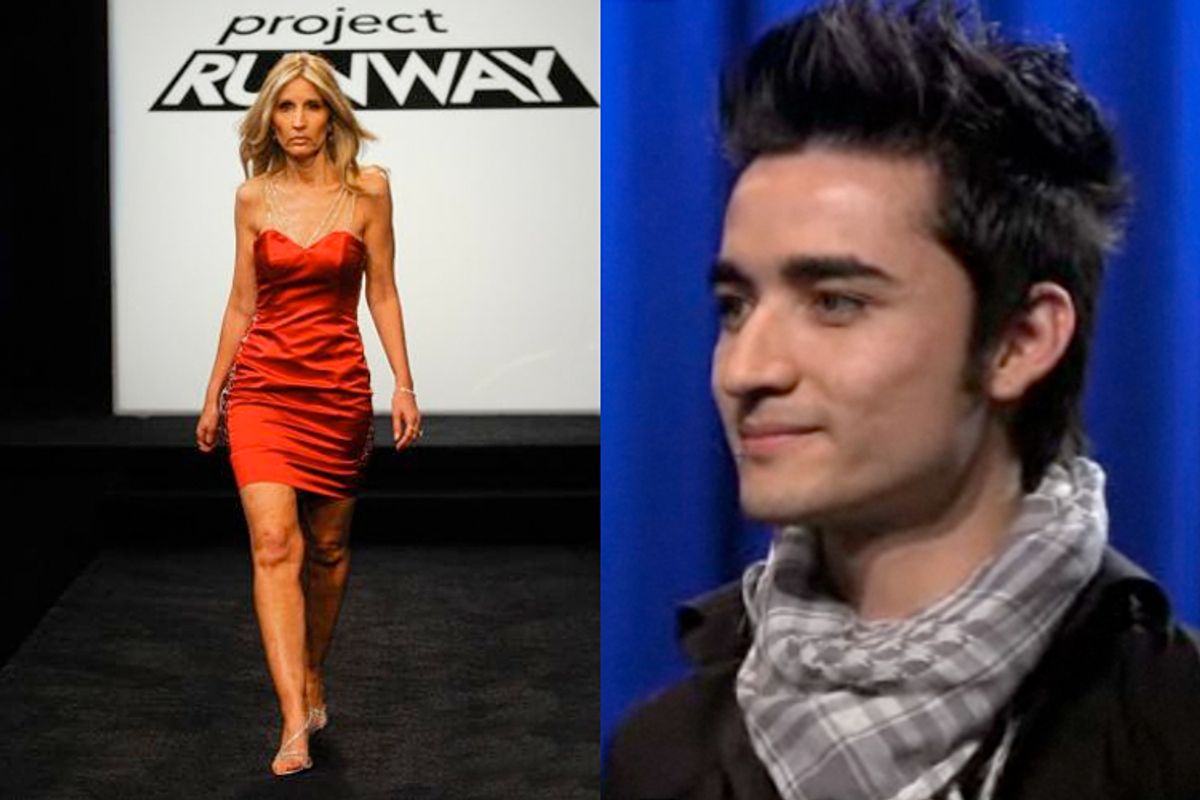 I approached this week's "Project Runway" with some trepidation. I recently learned that its  ratings have plunged.  According to experts, a bad cast may be to blame.  Ping, the most entertaining character on the show, is now gone.  But I am going to do my patriotic duty and watch this show until the bitter end, even if they resort to bringing in a small, cute relative of Tim Gunn's to try to enliven the plots. (Do you remember Cousin Oliver from the "Brady Bunch"?)

As usual, the show begins by showing the sleepy designers bantering and performing their morning ablutions. Maya wins backhanded compliment of the day: "Mila is the older version of me." Which, in all fairness, is not untrue. They both sport severe dark bobs with bangs, the requisite bombshell lipstick and have a similar modern design aesthetic.

The designers trudge over  to Parsons to meet Heidi, who is in a short, strapless, floaty dress, still pregnant, but with nary a swollen ankle in sight this week. She enigmatically informs them that they will be making a "look for a fashion week gala" for some "inspiring women." Cut to the workroom, where Tim Gunn is standing with some woman from the Campbell's soup company. [needle skips off record] What?

It turns out that Campbell's is supporting the Go Red For Women initiative of the American Heart Association, whose goal is to raise awareness of heart disease in women. When I am not writing recaps of TV shows, I am employed as a nurse practitioner.  The nurse in me loves that the shameless plug this week is for Go Red. The fashionista in me does not at all love that the designers must use fabric that has been specially printed with the Campbell's soup can label. So the challenge this week? To make an evening dress for some "real women" who have been impacted by heart disease. The dress must be primarily red, and the Campbell's branding must be incorporated somehow.

The designers then get to meet the women for whom they are designing.  The women come in all shapes, sizes, and ages, though Jesus excitedly reports about his heart disease survivor, "I'm really excited because she's very, very tiny!" Jay learns that his client had been technically dead for two minutes then was revived. "I've never met anyone who died!"

After getting to know the women, their body types, and the style of dress they would like, the designers head to Mood fabrics, where they are all looking for red fabric that doesn't look too cheap. Good luck. Tim points out to one of the designers that his fabric "looks awfully Valentine's Day." Now, I am Tim Gunn's biggest admirer and supporter. But duh. It's red! The color choice of First Ladies, Santa Claus, and yes, Valentine's Day.

It's interesting to watch the designers struggle to design dresses for women who don't have  models' proportions. Someone complains that her woman doesn't have measurements of 35-25-34. Another laments the difficulty of his full-figured woman. Who actually wears the majority of clothes? People who don't look like models, of course.

Georgina Chapman is the guest judge this week. She is a designer for and founder of the label Marchesa, which is known for its exquisite Asian-inspired eveningwear. Oh, and she's also married to Harvey Weinstein, one of the producers of "Project Runway." Coincidence? Whatever cynicism I may have about this is quickly charmed away by the lovely Georgina. She is articulate, and gives the designers thoughtful and experienced critique on their designs. I am also a sucker for her posh English accent.

Now it is time for the runway show. Never in my life have I seen so many shiny red satin gowns in one place. I don't love any of them, and none of them looks particularly original or cutting edge.  Some are unflattering and poorly made (more on this soon).

This week's outcome is predictable: Amy wins; Jesus loses. Hugs and tears abound, and Tim gently suggests that Jesus hurry the heck up, stop hugging people and go clean up his work station.

I'm left feeling peculiarly empty. There wasn't enough Anthony this episode. There also wasn't enough spectacular and innovative design.  The previews for next week suggest a grand and daring challenge, with a prize unlike we've ever seen. I am just hoping it will hold my attention, and include at least one amazing garment. No heart attack necessary.