Still proud of winning the racist Wallace vote for Nixon, Pat Buchanan blames me for demonizing the righty fringe 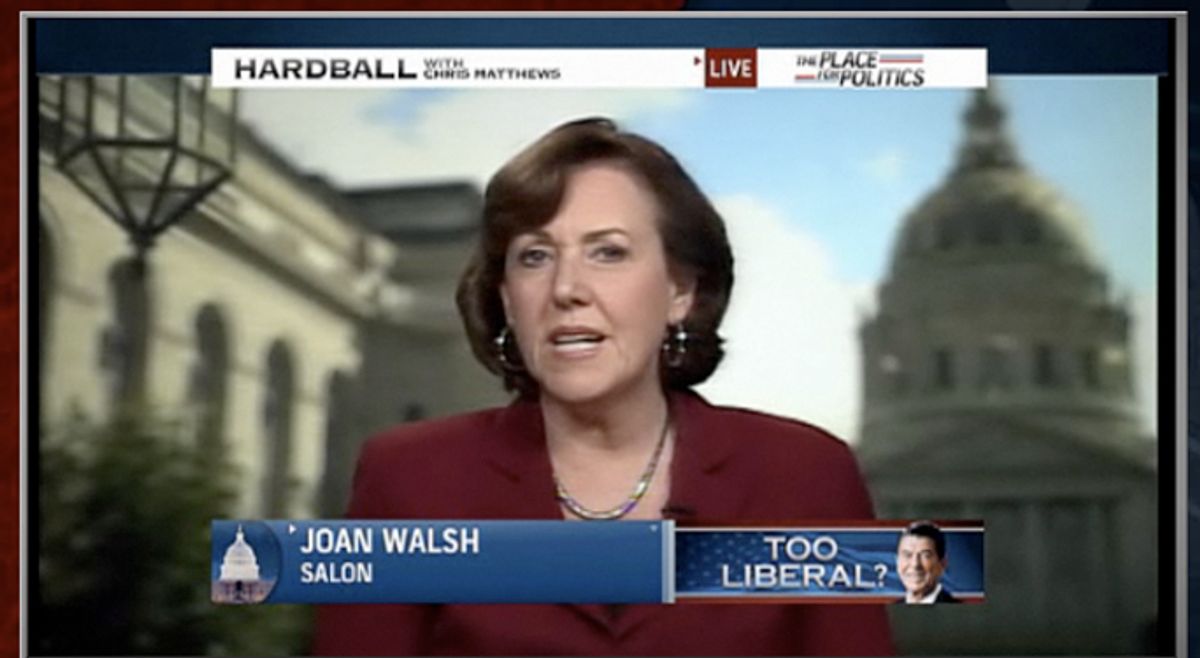 I was invited on "Hardball" to debate Pat Buchanan over whether Ronald Reagan would be "Reaganesque" enough for the modern Republican Party. (News hook: Florida Gov. Charlie Crist is trying to beat back a right-wing challenge for the state's open Senate seat by making that claim.)

I agreed with Crist: If Reagan were a GOP politician in 2010, he'd likely be getting a primary challenge from the tea party fringe, because he repeatedly raised taxes, supported amnesty for illegal immigrants, and reached across the aisle to work with Democrats -- including Chris Matthews' old boss, Tip O'Neill, to raise taxes and "save" Social Security.

Reagan also, whether I liked it or not -- and I didn't -- created the phenomenon of Reagan Democrats, expanding his party's reach into mine, even into my family, since white working-class ethnics were prime targets for Reagan's roll-back-the-1960s appeal. There aren't many tea party Democrats, although there are some Democrats who are rightfully fed up with their own party's serving their corporate masters. The "purity test" tea party folks are trying not to grow the party, but to shrink it so it fits into a tea bag. I said all that on "Hardball."

Buchanan, not surprisingly, disagreed. But things stayed civil -- we debated the scope and cause of Reagan's tax increases (watch the whole video, below, if you're interested) -- until Buchanan declared he was supporting former Arizona Rep. J.D. Hayworth, an ultra-right birther backer, in his primary challenge against Sen. John McCain. When I called Hayworth a "birther," Buchanan lost it. He yelled at me for "demonizing" the tea party right, and we went at it.

I reminded Buchanan that I covered a local tea party last year and worked hard to acknowledge the economic populism and anti-corporate-bailout sentiment animating some of the demonstrators. Whatever. But my favorite part of the debate was when Buchanan bragged about capturing the George Wallace vote for his boss, Richard Nixon, and I called that the "racist" vote. (For the kids, George Wallace was the Alabama governor who preached "segregation now, segregation tomorrow and segregation forever" and stood in the doorway at the University of Alabama to prevent black students from entering in 1963. He ran for president as an independent in 1968 and won five Southern states; Nixon and Buchanan clawed many of his supporters back in 1972, after an assassination attempt put Wallace in a wheelchair.)

Calling the Wallace vote "racist" enraged Buchanan too, and he countered that those racists had voted for Lyndon Johnson in 1964. I acknowledged many of them did: Johnson lost them when he signed the Civil Rights Act of 1964, and he probably knew it at the time, famously remarking (although I can't find a reliable source for the famous remark) that he'd delivered the South to the Republicans for a long time. Right about then Matthews called time on our segment.

You can dismiss this as dumb cable TV chatter, or ancient history, and that's your right. But I would urge you not to do either. By bragging about his success in winning the racist Wallace vote for Nixon way back when, Buchanan is (perhaps unconsciously) admitting the through-line from that racist GOP segment through the birthers and extreme anti-Obama tea partiers of today. It's a remarkable admission. We should pay attention to it.

Here's the video. The fun starts at 8 minutes in: