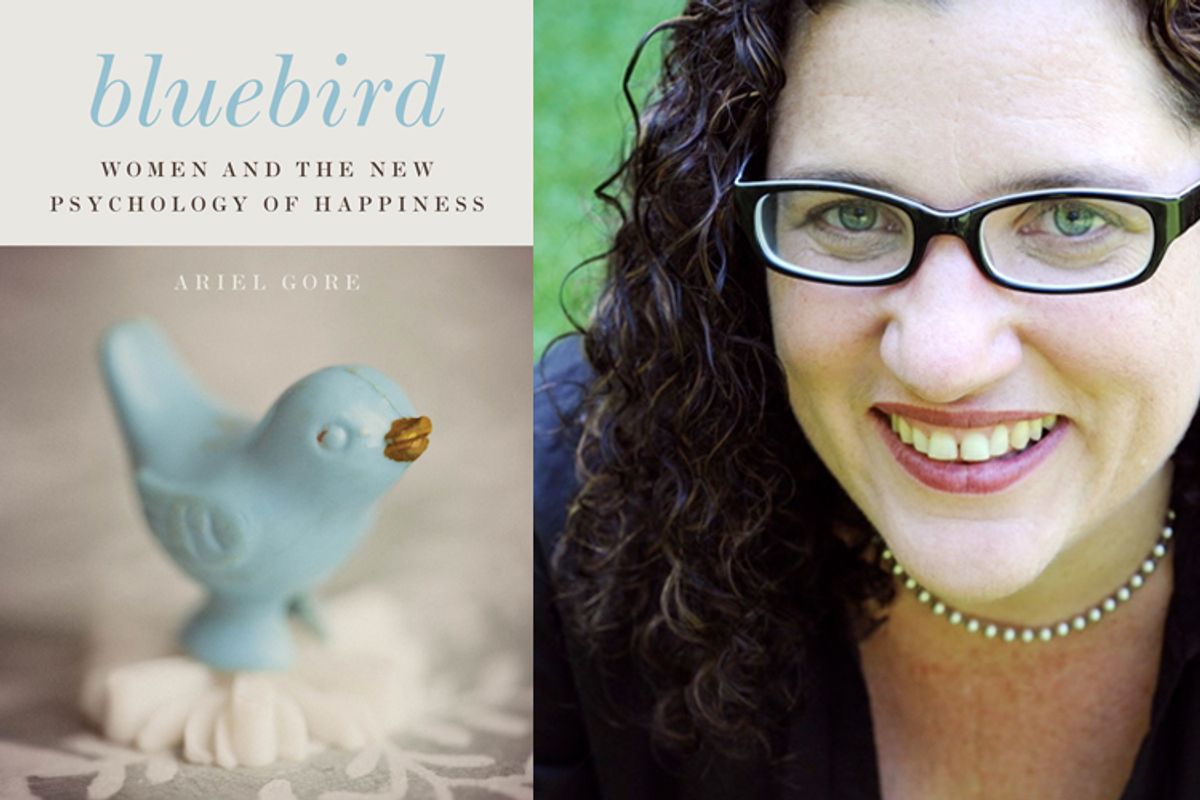 Last spring, the blogosphere lit up with a  study claiming women were not only less happy than men, but less happy than they had been a generation previous. Columnists like Ross Douthat, Maureen Dowd and Arianna Huffington scrambled to explain the so-called gender gap in happiness, many of them coming up with a predictable culprit: Blame feminism!

As Ariel Gore knows, women's happiness is much more complicated than that: She literally wrote the book on the subject. "Bluebird: Women and the New Psychology of Happiness" takes a probing and nuanced look at the field of happiness studies as they pertain to women. For instance, while some studies show women testing sadder than men, they also test happier than men. But "Bluebird" isn't a statistics-crunching book. It is what Gore calls a "study of living -- an adventure into the feminine history, science and experience of happiness -- intent on discovering the secret of joy."  She read books, both classic and contemporary, attended workshops in positive psychology, and interviewed hundreds of women.

Gore's life is evidence that there is no conventional script for happiness in American womanhood. The daughter of hippie parents, she skipped college and traveled around the world in her late teens, until she became pregnant at 19. More than a dozen years later, Gore is the founder of the award-winning literary Web site Hip Mama, the author of six nonfiction books, and a mother of two. Salon spoke to her from her house in Portland, Ore., about feminism, the weird powers of positive thinking and the joys of doing it all imperfectly.

How do you think feminism became the fall girl for women's unhappiness?

People said, OK, if women are less happy than they were 40 years ago --  which, in itself, would be very hard to measure -- then they thought, Well, what happened 40 years ago? Oh yeah -- feminism! So therefore feminism failed! It’s this crazy talk because the first rule of research is not to confuse correlation with causality. What else has happened in the past 40 years? Well, hey, maybe women have replaced the time we used to spend talking with friends with TV watching. When you study postpartum depression, there is a very clear understanding that in communities where you see more support, there is less depression. How come nobody said, "Oh, women are unhappy because of TV!" It’s at least equally plausible.

Some commentators have blamed women's alleged unhappiness on unrealistic expectations. Is there any truth to the idea, or is it just an anti-feminist cop-out?

When Marion Milner’s book "A Life of One’s Own" came out in the '30s, reviewers said, "Oh, the reason this woman is unhappy is that she wants too much." It’s crazy, especially in American culture, to say something like that, because American culture is built on this notion of striving. I do think it’s pretty rich to then turn around and say, "Oh, ladies. It’s back to the ironing board for you."

But I think there is a kind of depression that is more available to people with more privilege, whether that is economic privilege or feeling fully empowered, because then it really is just down to you. You can’t say, "Oh, if only I had gone to college ..." You think: "Shit! I did go to college!" I do think there is a sort of existential sense of failure that is more available if you’ve had every opportunity.

Some people tend to thing of happiness as a luxury item, the kind of thing you only get to start worrying about once your basic needs are met.

There’s been a lot of criticism of American positive psychology, because that has been the premise: When we’re not at war, when we have our basic needs taken care of, then we start looking at what makes us thrive -- which is presumably why [positive psychology] has focused so much on men, elite men, people who feel like they have maximum control over their lives. But Buddha taught us that life is suffering. You’re not going to get rid of that. So then is false cheerfulness the only thing left to us? Do we have to pretend that everything is hunky-dory and then we can look at what’s going to make us happy?

One of the studies you bring up in your book found that women are both happier and sadder than men. How might that connect to this idea of happiness as rooted in finding solace in conflicting emotions and circumstances?

For my research for this book, I didn't talk to a lot of men, so comparative things became sort of hard to wrap my mind around. In our cultural history, all emotions have been more culturally acceptable to women. There’s this icky side to that, where it’s been our job to be like, "Eek! A mouse!" or to really wail at the funeral, or just do most of the emotional work for the family. But then there’s the upside of that, which is that there has been more openness for women to express their emotions. You could say maybe that is a biological thing, but I have no opinion either way on that. I don’t really care whether it’s my conditioning or whether it’s my PMS: It’s still real.

Both you and Elizabeth Gilbert, the author of "Eat, Pray, Love,"  write about happiness as being an "act of will" -- something you can strive for. Do you think that might reflect a kind of post-feminist ethos, i.e., you deserve things more when you work for them? Is it peculiarly American? Or is it more universal?

The first person who ever told me that happiness was work was this manic-depressive artist I knew when I was in my 20s. I was like, What are you talking about? Happiness just happens. That’s even the root of that word. How could it be work? We tend to think the same thing about love -- it shouldn’t be work; it just happens. But it makes sense if we reframe what work is -- that work is not necessarily toil, but attention and consciousness. I’m sure that this notion is contemporary in a way, especially from a feminist point of view. But it’s been kicking around for awhile. Certainly a goal of many spiritual traditions is how you can be in control of your own emotional reality despite what happens. Viktor Frankl, the author of "Man’s Search for Meaning," talks about that a lot. In the middle of a concentration camp, amid all that suffering, what do you have control over? You have control over your emotional steadiness.

You point out that one of the downsides to American positive thinking is that it can lead to a kind of victim-blaming that presumes people may be to blame for their own bad fortune. So if you live in the projects, you know, you must not be visualizing well enough, whereas those people living on the hill are actually better people. How do you reconcile that with the idea that you can work toward your own happiness?

They are kind of opposite philosophical explanations. That whole you-create-your-own-reality thing is so complicated. In any circumstance, can you be open to all emotions, and be emotionally steady, to allow yourself to be devastated by the violence of life and the suffering of life? That’s control over your own emotional steadiness, not "I visualized a big house, and I got it!" That’s magical thinking in this cuckoo way. But there’s some truth to the idea that, say, if I can imagine myself going to college, I may be more likely to go. But all these ideas get oversimplified.

I get a strong sense in the last part of your book that you seem to believe one way to make oneself happy is to be a rebel -- to reject the script, whether it’s the Republican script, the traditional mother script, the feminist script. Is that true?

It is. And it speaks to this question of perfectionism. Somehow that rebellious spirit is the same spirit that feels like it’s OK if there’s mud on our pants. There’s something to just not doing what you’re told that allows for a little more self-forgiveness that seems to be required if you are not just going to have a total anxiety attack every day.

Part of the reason these things come together in a really complicated way for some women may be because you have these greater expectations, and yet we are still stuck with this kind of 1950s-style perfectionism. So yes, I’ve written six books and I’m raising two kids and I have this cute little house and yet I can still say, "My house is a mess! My kids aren’t doing well in school! I have failed!" if I want to set myself up like that. I mean, that’s a setup, right?