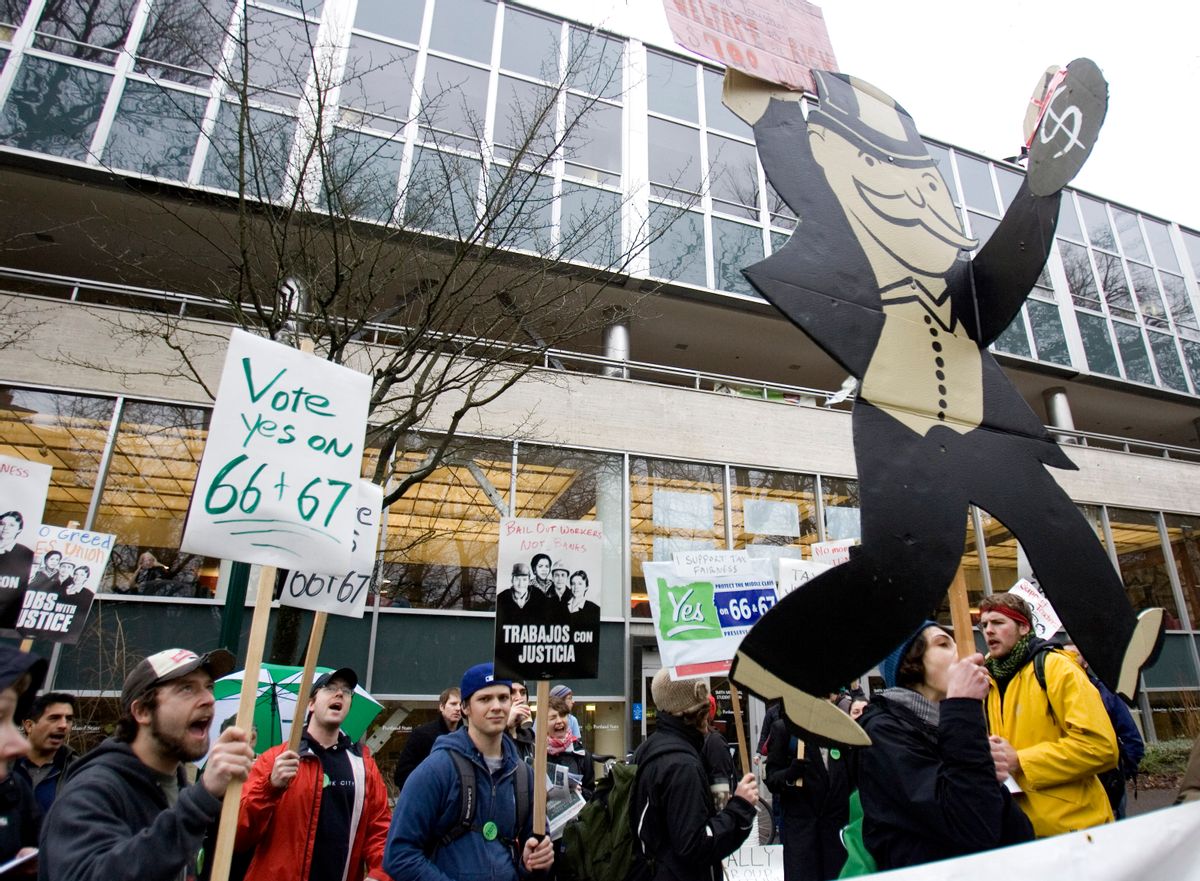 Plagued by deficits, communities everywhere must now decide between tax reform and public spending cuts -- between economic life and death. And thanks to two Western bellwether states, we know what each choice means.

As a venue for political experiments, the sprawly GOP enclave is as pristine a conservative laboratory as you'll find in America. If the city has garnered contemporary notoriety at all, it has achieved infamy for domiciling right-wing groups like Focus on the Family and infecting the world with viruses like Douglas Bruce -- the father of draconian initiatives that seek to prohibit governments from raising levies.

When the tea party movement’s anti-tax activists refer to the abstract concept of conservative purity, we can turn to a microcosm like the Springs (as we Coloradoans call it) for a good example of what such purity looks like in practice -- and the view isn't pretty.

Thanks to the city's rejection of tax increases -- and, thus, depleted municipal revenues -- the Denver Post reports that "more than a third of the streetlights in Colorado Springs will go dark; the city is dumping firefighting jobs, a vice team, burglary investigators, beat cops; water cutbacks mean most parks will be dead ... recreation centers, indoor and outdoor pools (and) museums will close for good; Buses no longer run on evenings and weekends; (and) the city won't pay for any street paving."

Meanwhile, even with the Colorado Springs Gazette uncovering tent ghettos of newly homeless residents, the city's social services are being reduced -- all as fat cats aim to punish what remains of a middle class. As just one example, rather than initiating a tax discussion, the CEO of the Springs' most lavish luxury hotel is pushing city leaders to cut public employee salaries to the $24,000-a-year level he pays his own workforce -- a level approaching Colorado's official poverty line for a family of four.

This is what Reaganites have always meant when they've talked of a "shining city on a hill." They envision a dystopia whose anti-tax fires incinerate social fabric faster than James Dobson can say "family values" -- a place like Colorado Springs that is starting to reek of economic death.

Choosing life, by contrast, means doing what Colorado's governor and state Legislature are doing by temporarily suspending corporate tax exemptions and raising revenue for job-sustaining schools and infrastructure. Even more dramatically, it means doing what voters in Oregon did last week.

Despite these measures' exempting 97 percent of taxpayers, conservatives waged a vicious opposition campaign, trotting out billionaire Nike CEO Phil Knight as their celebrity spokesperson. But this time, the right's greed-is-good mantra failed. In a swing state that had killed every similar initiative since the 1930s, voters backed the tax increases -- and chose economic life.

No matter where we live, this same choice will soon face us all in some form. It is a choice embodied in President Obama's pragmatic initiative to end his predecessor's high-income tax breaks, a choice for which future local and federal elections will serve as proxies.

Inevitably, anti-tax zealots will attempt to obscure what this choice is about -- but the choice is now crystal clear.

Tax reform or draconian cuts, life or death -- the decision is ours.