How the Super Bowl won me over

I used to be a sports-hating snob. Then I fell for a fan and discovered football is the best reality TV there is 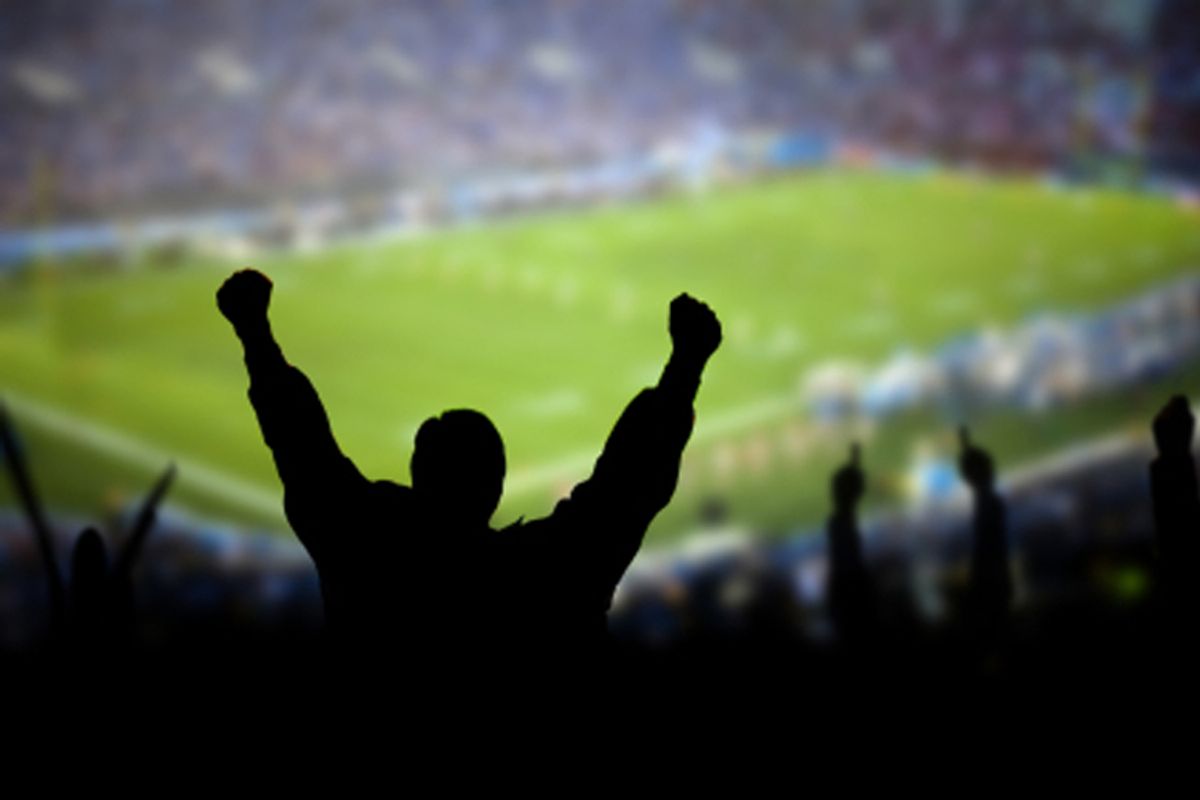 In 1977, the Oakland Raiders finally made it to the Super Bowl. I was living at the beach that year, temporary roommates with my best friend, Stephen Salinger, a life-long Raiders fan. He made food, invited friends in, cheered through the game and celebrated for days after the Raiders' decisive 32-14 win against the Minnesota Vikings.

He couldn't believe it. I had to be the only man in America not watching the game. It was perverse, it was pathological. It was unpatriotic. But there was a swell running and, in a favorite phrase of mine at the time, football was just "guys jumping into piles" anyway. I thought I was "above" football, but the truth is I was a petty little snob from an Upper East Side, socialist-leaning family. (My mother voted for Adlai Stevenson. Twice.) We went to antiwar demonstrations and Pete Seeger concerts (yes, we sang along), not football games. Running photographs at half-time from Shea Stadium to the pressroom at the Daily News, years before, I had gotten a closer brush with the sport. I came away impressed by the sheer size of the players and the gladiatorial brutality of the game itself. But I wasn't inspired to watch.

I later became friendly with one of the players on the field that day, Jets cornerback Steve Tannen. We sat in my step-brother's living room watching another Super Bowl, and he explained what was going on. I still didn't get it. My smug superior pose was like a suit of armor. I clanked when I walked. An actual NFL player was sitting on a couch with me, explaining the intricacies of the game, and all I could think was, "This is way too complicated for such a dumb sport."

I might never have discovered the game at all, but around 10 years ago, something completely unexpected happened. I fell in love with a fan.

Annie and I worked together in my contracting business and we were painting a kitchen one Sunday afternoon, when she put on the radio. Not NPR as usual, but an AM station out of New York City, WFAN. The Giants were playing, and she didn't want to miss the game. She liked listening almost as much as watching, which was convenient since the hated Patriots had knocked the Giants off the Boston television stations most Sundays.

Bob Papa and Dick Lynch called the games better than the boneheads on Fox and ABC, and she liked constructing the plays in her mind from their rapid-fire descriptions: "It's third and 18, Collins in the shotgun. Amani Toomer split wide left, Cross to the right, Tiki Barber in the slot. Long snap from center. Collins back to pass. He has Amani Toomer up the left side line, he's all alone … the pass is short, he comes back for the ball, makes the catch, in typical Toomer fashion, dragging both toes in-bounds. That's a miraculous catch at the 12 yard line and -- no, there's a flag on the play. It's coming back, folks."

I didn't understand most of this. It was like listening to cricket or curling. But Annie sure did. I'll never forget her howl and rage and frustration at that moment, when it turned out that Roman Oben had forced the holding call.

"What the hell are you doing?!" she shouted at the radio. "They're killing us with these penalties! You don't hold there! Not there! Not now! We're giving them the game! Why can't they just let them play? Now watch! It's fourth and inches and Fassel's going for the field goal! Just give Tiki the ball! Let him run it!" But he didn't, and the kick went wide. Another dismal day for the Giants.

But the fans were used to days like that, in the lean years before the great squad of the mid-'80s and the tough years since. And at the end of all those seasons, they'd just sigh and say, "Maybe next year…" There was always plenty of time to lick your wounds and prepare for the next season: It was a long way to September.

Eventually I learned the terminology, and more and more every Sunday I got drawn into the games. It had happened the same way for Annie, as a little girl, sitting with her dad, watching the games on television -- or traveling to Yankee Stadium, and even the Yale Bowl, during those seasons when the Giants didn't have a venue of their own. Football turned into the best way to spend time with him: It gave them an endlessly fascinating topic in common, and a perfect strategy for getting to know her otherwise difficult and remote father. A few years later I saw "Remember the Titans," and thought I glimpsed a little of Annie in the white coach's 10-year-old daughter, screaming at the TV. Not that much has changed. She still paces and chides and screams, "GO DEFENSE," on those crucial goal-line stands. I don't think Annie sat down once through the whole of Super Bowl 44, when the Giants triumphed in their rematch with the hated Patriots.

She's had her glory moments as a fan. She submitted a song about the team -- lyrics to the tune of Ora Lee -- in a FAN contest, and won it. She wound up singing on the radio with Offensive Tackle Karl Nelson. Bob Papa had written "Good" on the sheet she submitted -- as terse and emphatic as the call on an extra point. Some sample lyrics:

We are playoff bound

With Stephen Baker in the air

And Otis on the ground

A friend of Annie's worked for the New Yorker, and the big day got written up as a Talk of the Town piece.

The more I watched, the more I fell in love with the game. I gloried in the spectacular pounding the Giants gave the Vikings on the way to that other Super Bowl, in 2000 -- and suffered through their humiliating loss to the Ravens, a few weeks later. We drove all the way down to Connecticut for that calamity. Annie's whole family was morbidly in tune with the team, reading the mood on the field even before the kickoff. "They look flat," her dad announced as the Giants ran out onto the field. It seemed nuts to me, but they were right. "It's all about emotion," Annie told me, and I began to sense that myself, feeling the shifts in psychic energy on the field with that crucial touchdown before the halftime, or the break in concentration when the other team called a disruptive timeout.

With the increasing popularity of so-called reality TV and the cultural ascendance of unscripted drama -- from "The Amazing Race" to "American Idol," from "Survivor" to "The Biggest Loser" -- I started to realize a curious small truth: Football is our true reality TV, and our most fascinating unscripted drama. I had seen football movies like "Varsity Blues," where the final victory was a foregone conclusion. In the actual game, anything can happen. An interception or a turnover, a miscalculated on-side kick, can turn a game upside down.

I realized that football defines itself through series of paradoxes. It represents a kind of utopian view of America, where people work together toward a common goal, a world without rancor or racism, a peaceable kingdom … where men are broken and battered in ferocious combat every week. It's a brutal sport that rewards elegance and grace, that elevates men to unparalleled stardom through intricate self-effacing military teamwork; a bruising physical competition that relies on levels of knowledge and intuition and cerebral analysis that would give an MIT statistics professor pause. It takes place on a hundred-yard playing field, and yet any individual game can be decided by a matter of inches; it plays itself out over almost four hours but so often resolves itself in the last few seconds -- that overtime field goal in the air as the clock runs down.

It draws families together, like Annie's; and friends, like Stephen and me (we commiserate now, about the Raiders and the Giants); and cities, like New Orleans and Indianapolis, whose teams will be duking it out this Sunday in Miami. And it gives us an extraordinarily diverse cast of characters to enjoy: the old legends thinking about retirement, the kids scoring their first NFL touchdowns ever, in the autumn sunlight; the younger brother struggling in his brother's shadow and the older brother moving closer to the title of greatest quarterback of all time, and closing in on it this weekend, beyond the glory of another ring. And the other players who'll never get the ring -- Tiki Barber, who retired too soon; or Barry Sanders, quitting because he was contractually bound to play out his career with a losing team. All the great careers ruined by traffic accidents and drug scandals, or by carrying a loaded gun in the waistband of your sweat pants and accidentally shooting yourself in the leg.

It's a complex, fascinating world and I know I'm a part of it at last as I wait for Peyton to throw that first pass on Sunday, and wonder what happened to his little brother's team, lying down to be trampled by the Vikings in a humiliating final game, and blow out a long breath and say, "Oh well. Maybe next year."

I'll be watching the Combine and the draft on the NFL channel, discussing the prospects with my family. (The Giants need help on their offensive line.) It's not much, but I'll take what I can get.

It's a long way to September.