What Super Bowl? Alternatives to the big game 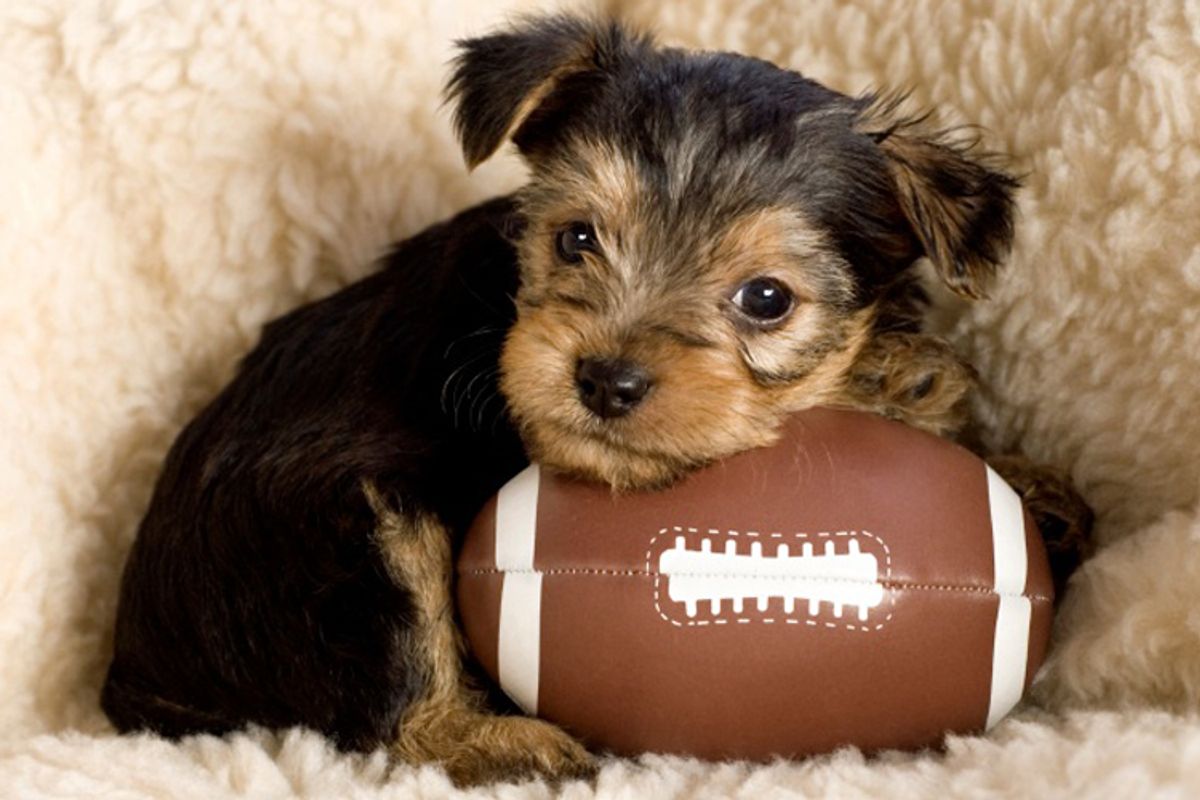 Most of us will take part in any function, holiday or yearly tradition that involves melted cheese and requires sitting in one place for four to eight hours, moving only to retrieve refreshments and/or scold anyone blocking the television set.

Thankfully, even small children and needy house pets seem to have an intuitive grasp of the divine nature of the Super Bowl, during which adults reserve the right to distractedly mumble and gorge themselves all afternoon while staring at the TV.

Unfortunately, the game itself frequently sucks. But don't let that rob you of your one big chance to shut out the world and stare, slack-jawed, at a five-hour-long televisual sporting spectacle. Why, when the game gets dull, why not flip over to ...

Maybe the men in shiny white tights no longer seem like adequate visual eye candy to match your outsize libido, or maybe you're so old that what really makes your heartbeat race uncontrollably at this point is the sight of a 4-month old Chihuahua-pug mix, clumsily chasing a squeaky football toy across the goal line while a 3-month-old Lab-collie mix pounces on her own tail. Does this mean you're a sad shell of your former self, or does it simply mean that you're finally mature enough to acknowledge that nothing can make you lose sight of your own mortality quite as quickly as the sight of baby animals cavorting?

This year the festivities (3-5 p.m. Sunday, Feb. 7, on Animal Planet) include bunny cheerleaders, hamsters flying a blimp, and a kitten halftime show that's guaranteed 100 percent clean and devoid of nipple flashing. And remember, your kids will enjoy the kittens a lot more than listening to Grandpa humming "Pinball Wizard" along with the Who, who are playing at halftime on the real Super Bowl.

The Puppy Bowl even features a human referee, who makes calls like "unnecessary ruffness." Yes, sounds like you'd better watch with the sound off, or risk being so thoroughly polluted by Excessive Cuteness (also a personal foul) that you end up adorning your back dashboards with plush toys or take to wearing rainbow suspenders without irony for the rest of your days on earth, a style choice that's at least as bad as singing along to "Won't Get Fooled Again" for the 50,000,000th time in your life.

Remember the old adage, "Those who never stop singing 'Won't Get Fooled Again' are destined to get fooled more often than anyone else"? Still, nostalgia has a way of making fools of all of us. What else can explain why the network geniuses would turn back the clocks and break out another boomer indulgence for the halftime show this year? Let's see, there was Springsteen, Tom Petty, the Rolling Stones, Paul McCartney ... Apparently in the wake of nipplegate, TV execs suspect that if anyone under 65 is involved in the show, it'll immediately devolve into a debauched, orgiastic spectacle of biblical, traditional-family-toppling proportions.

Why is it, though, that when marketing and development and publicity people want to cater to "the mainstream," they're always torn between peppy preteens, country-pop sensations, and guitar-solo-wielding retirees? When you turn on your TV set for some big concert, why is it always a prepubescent hottie you've never seen before or the classic rock radio that was playing when your high school boyfriend drove you to Hardee's in his yellow Pinto for the first time?

News flash! Pete Townshend has revealed a part of the Who's set list! It seems they plan to play -- wait for it -- "Baba O'Riley," "Who Are You," "Pinball Wizard" and "Won't Get Fooled Again"! Man, I can't wait to hear "Pinball Wizard" again, I haven't heard that song in at least a week now. But speaking of being damned for all time, there's always ...

It's only natural that after several hours of watching various manly Christian hunks point toward the heavens and offer a big shout-out to the Man Upstairs in the wake of each particularly effective tackle or 5-yard gain, you'll want to pay homage to the big boss-man in the sky yourself. Why not flip over to the Faith Bowl III on your local Catholic network, where "professional Catholic athletes" will "discuss how they live out their faith in the public arena of professional sports and what challenges to family life they face." I can imagine a variety of challenges to family life that might come up for professional athletes, from locker room bare-ass bumps (or "moon landings" -- thank you, "Modern Family")  to the steady parade of bunny cheerleaders and assorted roving rodents in heat wandering around after every practice, anxious to snag a man with a million-dollar salary and glutes of steel.

Panelists will discuss "a sound Christian family life, and the important role of a husband and father in being a 'true man.'" But unless the panelists are going to demonstrate their true manliness by disrobing and then killing gigantic roaches lurking in the shower or putting on some tight short-shorts and soaping up one of the luxury vehicles parked in their driveways, we're not sure about the visual interest of this segment. The show's producers might consider swapping out former baseball star Mike Piazza for someone who'll look a little hotter loading up a washing machine wearing a French maid's uniform, like, say… pretty much anyone else.

But speaking of offensive, there's also ...

OK, I made that last one up. But speaking of far-fetched tie-ins, don't forget…

Yes, the DIY Network just had to find the most fragile of threads to herd audiences from the big game to its third annual potty-centric festivities. Yes, thanks to the Broke But Aspirational Housewife Channel, while your resident ball-scratchers are fully engulfed in America's yearly, fully sanctioned plunge into semi-violent homoerotica, you can sneak off to the bedroom TV set and escape into a world of dream bathrooms, bathroom makeovers and extravagant trips to Bed, Bath and Beyond.

And then there's Matt Muenster, a darling little morsel of a home contractor who's happy to fill the Nate Berkus role in the American housewives' extreme makeover fantasy, bathroom remodeling edition. If Mike Piazza won't put on a bunny costume and retile our half-bath, we're pretty sure that this smiling sweetie will. Mmm, look how he can caulk and talk at the same time! We ladies love a truly adaptive male -- particularly on a day when our own captive beasts appear incapable of doing much more than grinding potato chip crumbs into the rug every time one of their boyfriends on-screen crushes one of his boyfriends on the field.

So let's see: Puppy lovers, nostalgic boomers, homoerotic beastmasters, Christians, the testicle-obsessed and the bathroom-fixture-fixated. That pretty much covers all of us, doesn't it?

Congratulations, TV executives! You've reduced the American population down to six key demographics. Just recognize that Christians don't buy stuff, puppy lovers get distracted easily and wander off, the bathroom-fixture-fixated are prone to start cleaning their own bathrooms during the commercial breaks, and nostalgic boomers fall asleep by 9 p.m. -- presumably because they're hoping that, with a little more sleep, they won't get fooled again tomorrow.

Not bloody likely. Either way, enjoy the nacho-cheese-and-beer-induced paralysis and have a happy Super Bowl Sunday, America!

I Like To Watch Peyton Manning Super Bowl Television