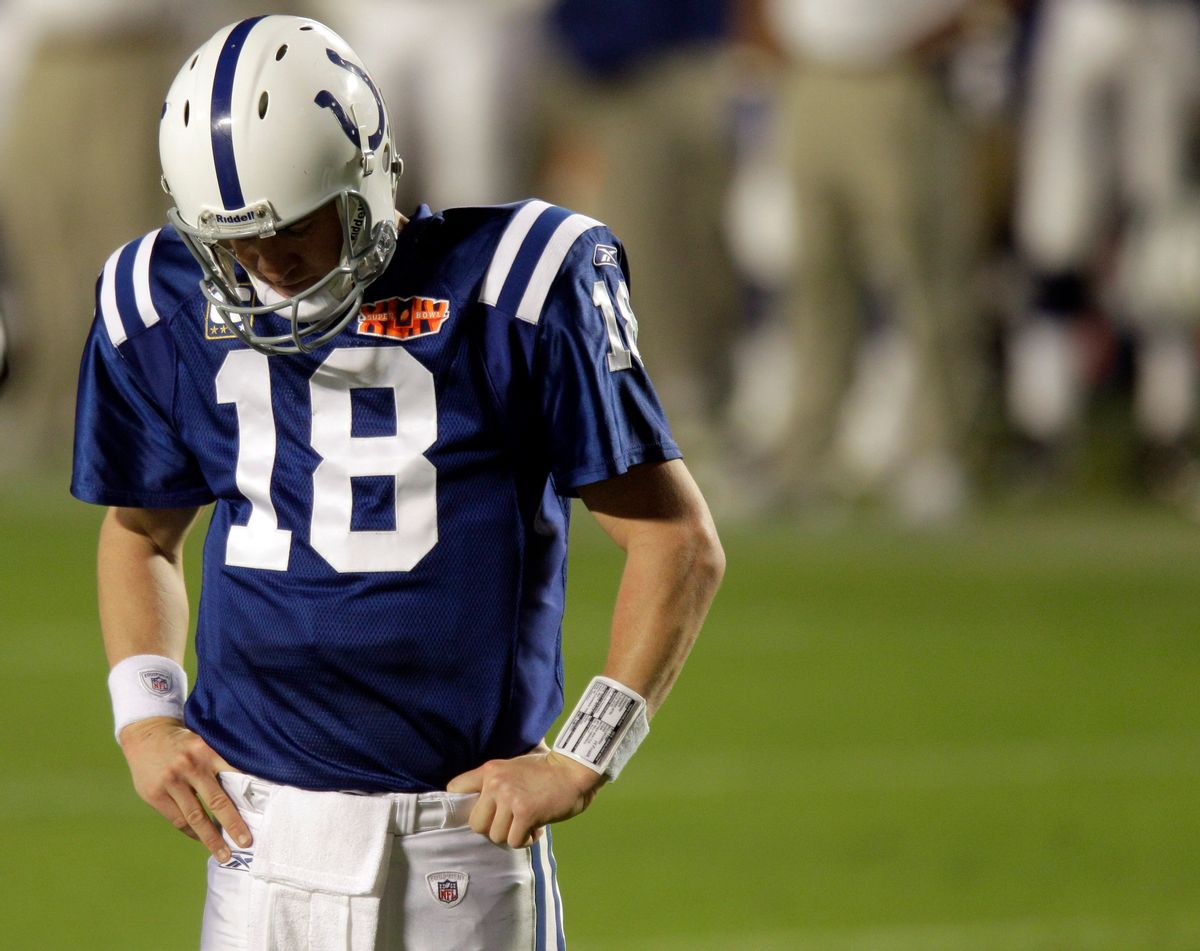 Peyton Manning is on a different planet, an undiscovered dimension. He's a Chuck Norris joke told without irony, a quarterback so transcendent your grandkids will tell their grandkids about your retellings of Peyton feats. Like the Almighty, Manning lives on an untouchable plane that his powers of ubiquity (look up, he's staring at you from yet another commercial) cause to overlap with our humble sphere.  If you haven't heard of him, you're probably going to hell. Way back on Sunday morning, the question wasn't whether or not Manning could carry the Super Bowl -- but how badly would he crush the Saints?

Thing is, just as the experts were touting Manning's clutch credentials, Tracy Porter intercepted the narrative. Peyton pulled a "Casey at the Bat," and gave the victory to what once was a literal Mudville (and is thankfully in a better state these days). Yes, the mighty Peyton has struck out. And no, it doesn't mean a damned thing about him. He's the same great QB who couldn't win "the big one" before he actually won the big one. All that's changed over the the last decade is how we talk about him.

In sports, the longer we get to know a superstar, the more likely we are to elevate his status.  After years of sustained fame, these elite athletes cease to be men and morph into collective history.  The Jackie Robinsons, Michael Jordans and Joe Montanas -- they're all America's gladiators. They fill our need to accomplish that dreams can only conjure. Did Babe Ruth really call his own shot? Who cares, it's fun to imagine blasting a homer after such an audacious move. And we all know this accomplishment couldn't be chalked up to luck: It was indicative of a commune with the divine.

In the weeks leading into the Super Bowl, I heard a lot of chatter about how Peyton was playing the best football of his career, that he was strutting toward G.O.A.T status.  This trope struck me as strange, because Manning's tangible numbers weren't far off from what he'd done nine years ago. Even weirder, experts seemed bizarrely united in predicting a Colts victory. (Even though the Football Prospectus writers cranked out coin flip odds.) What the hell was going on here?

Blame it on our worship of Manning's prowess. We'd seen greatness long enough to yearn for greater meaning, so much that it just had to be so. Manning needed to possess ethereal qualities that shielded him from luck, errors, drops and refs. Otherwise, what's the point? We're just watching some guy toss a sack o' swine when we could be out hoarding Bud Light and Doritos? Americans deserve better. (No, I don't mean they deserve a Bud Light beer bong constructed from Doritos).

Manning's the same guy he was when he lobbed picks to Ty Law and Rodney Harrison, thus outing him as an unworthy choker. He's the same dude who proved that label wrong when he led the Colts to a rain-soaked Super Bowl victory. Peyton is still spectacular, and I will continue to cherish every drop-back. The frantic Peyton pitter-patter, followed by a laser up-the-seam hurl will continue to fill sports fans with the same sense of awe that Kareem's sky hook did for our fathers in those rugged pre-HD days. Manning never "figured it out," became "clutch" or "choked." These were all false storylines constructed by those who wanted sport reduced to narrative scripture. The true testament to No. 18's greatness was our rush to project supernatural powers on a dumpy-looking pocket passer. Peyton, you hoodwinked us into assuming you'd win this. For that, you are truly great.