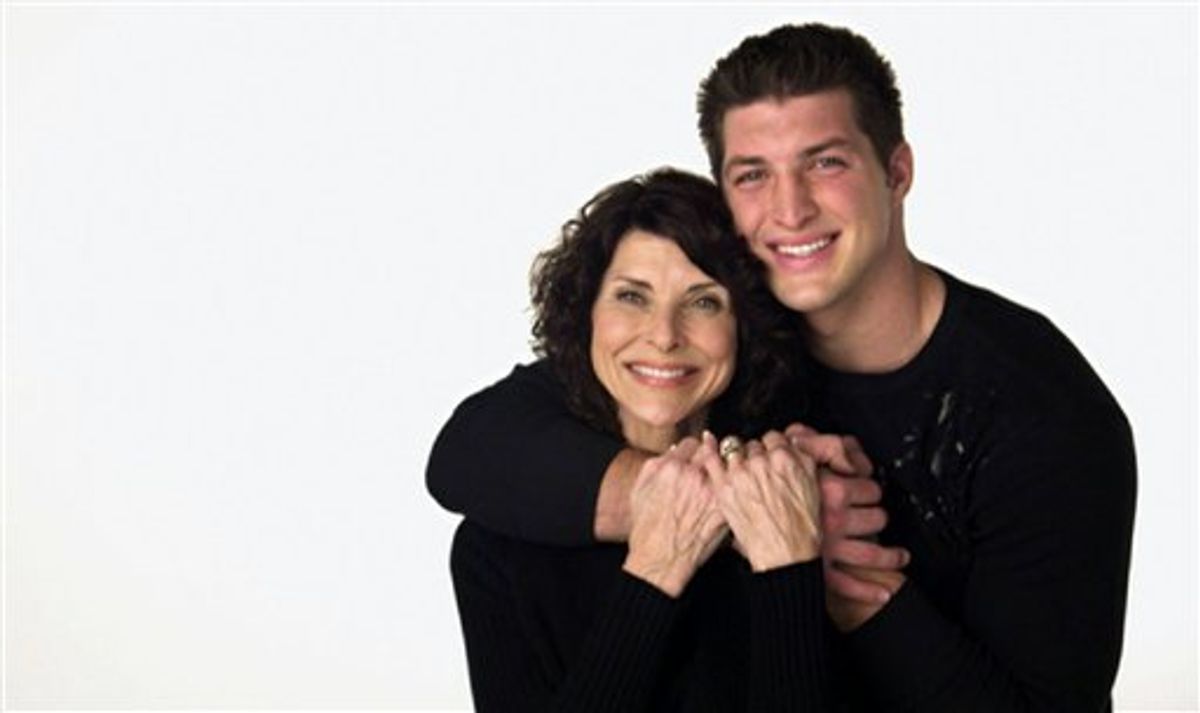 In this image courtesy of Focus on the Family, Heisman Trophy winner Tim Tebow hugs his mom Pam Tebow in a still photo taken from an advertisement to air during the Super Bowl. The commercial, expected to contain an antiabortion message, is the first such advocacy ad to appear in television's most-watched broadcast. (AP Photo/Focus on the Family) NO SALES (AP)
--

Are you kidding me? That was what all the controversy was about? A poorly-written 30-second spot set to upbeat elevator music? I missed the Puppy Bowl for that?

Focus on the Family's highly anticipated and controversial Super Bowl ad was sure shocking -- but not for any of the expected reasons. Pam Tebow didn't tell the harrowing story of how she risked her life by refusing a medically-advised abortion while pregnant with her future Heisman Trophy-winner. Instead, she talked about her "miracle baby" without mentioning the particulars of his birth. She painted just the broad strokes of a heartwarming family tale:

He almost didn't make it into the world. I can remember so many times where I almost lost him. It was so hard. Well, he's all grown up now and I still worry about his health. You know, with all our family's been through, we have to be tough.

Cue: Her son, Tim Tebow, who comes barreling across the screen and tackles his mother to the ground. I guess that was meant as a punch line? Then Mrs. Tebow says in an "aw shucks" manner: "Timmy! I'm trying to tell our story here." The spot ends with the message: "For the full Tebow story go to FocusOnTheFamily.com. Celebrate family. Celebrate life." That last bit is as close as the ad gets to propaganda. (Another version of the ad follows a similar script, only poor mom isn't body slammed.)

Of course, anti-abortion rhetoric abounds on the group's Web site. There's a featured in-depth interview with both of "Timmy's" parents about the circumstances surrounding his birth, and his father talks of "weeping over the loss of millions of babies in America that were never given a chance." But, despite all the debate over whether "issue ads" belong in the Super Bowl, and how they might change the experience of watching the game, the biggest night in sports ended up mostly being about sports.