Thanks to a new machine, the future of espresso is here -- whatever that means 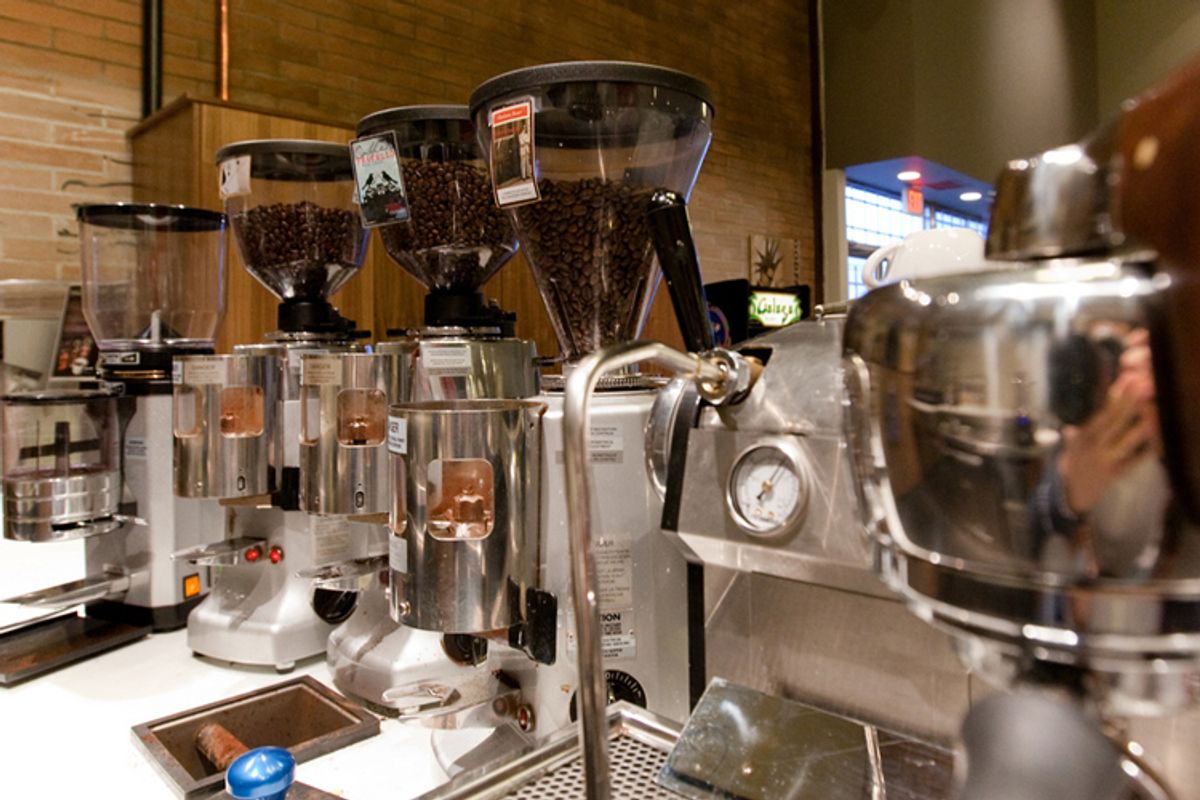 Rejoice! Fourth-wave coffee is here, and its name is Slayer. And no, it's not a coffee-themed WWE wrestler -- the Slayer is a tricked-out, handmade espresso machine, and if the buzz is to be believed, no crappy cup of joe is safe. A coffee blogger at Serious Eats swooned about its ability to "enhance or manipulate flavor profiles," and even claimed that it marked the beginning of a new age: "I can honestly say," she wrote, "the moment Slayer hit the market, fourth wave coffee arrived."

Fourth-wave coffee? When, you might wonder, did espresso-making become the feminist movement? In 2003, apparently. That's the year coffee purists first adopted the "wave" concept to explain the ways in which coffee taste has improved in recent years. The concept was first proposed by Trish Skeie, of Seattle's Zoka coffee and a prominent figure in specialty coffee, in a 2003 article for the Roasters Guild's Flamekeeper magazine.  The gist: There have been three waves in coffee consumption and preparation -- and we didn't get things right until now.

The first wave, according to Skeie, began in the years following WWII, when instant coffee was all the rage, and the drink was largely being consumed for its stimulating qualities. The second wave of coffee began in the late '60s, when companies like Peet's and then Starbucks began selling specialty grade coffees, folks started spending more time in coffee shops, and, egad, drinking espresso. And then, in the early oughts, claims Skeie, the "third wave" of coffee was upon us.

Marked by the proliferation of specialty coffee shops (like the West Coast's Stumptown and Blue Bottle, and New York's Ninth Street Espresso), third-wave coffee is all about taste. As Jonathan Gold, the L.A. Times' Pulitzer-winning food writer, describes it, the third wave is "where beans are sourced from farms instead of countries, roasting is about bringing out rather than incinerating the unique characteristics of each bean, and the flavor is clean and hard and pure." Since its inception, Skeie's "third wave" terminology has become standard among baristas and popped up everywhere from the Guardian to the New York Times.

If this seems like barista pretention gone overboard, you're not alone. As the Shot blog points out, claiming that good coffee hasn't existed until this decade is like "saying that Christopher Columbus 'discovered' America." "What constitutes quality coffee hasn't really changed … what has changed is the education and sophistication of the American consumer palate." Perhaps it's not that coffee has suddenly gotten much better, Americans have just learned new words to talk about it (crema, coloration, undertones), and coffee sellers have gotten better at marketing coffee as a luxury product.

But is the "third wave" really over?  What does Slayer offer that third-wave espresso machines do not? The La Marzocco blog (a company that makes espresso machines) speculated that a fourth-wave machine would allow for "advanced soft preinfusion," which creates "softer and more rounded" coffee. Slayer isn't quite there yet, but it allows baristas to manipulate the pressure under which the coffee is extracted in mid-shot, changing the viscosity, shade and "sourness" of the coffee. Or, as Cora Lambert, from New York's RBC coffee, explained to Serious Eats, the "espresso shot benefits from the analog quality of saturation brewing."

I've guessing that I'm not the only person who has no clue what most of that means, but that's just fine with me. The coffee connoisseurs and the hipster baristas will be able to taste the difference, and can argue about "waves" and "pressure" all they want. All I care about is whether my cup of coffee is hot, tastes good, and will keep me from falling asleep on the subway in the morning.