How David Paterson brought it all on himself 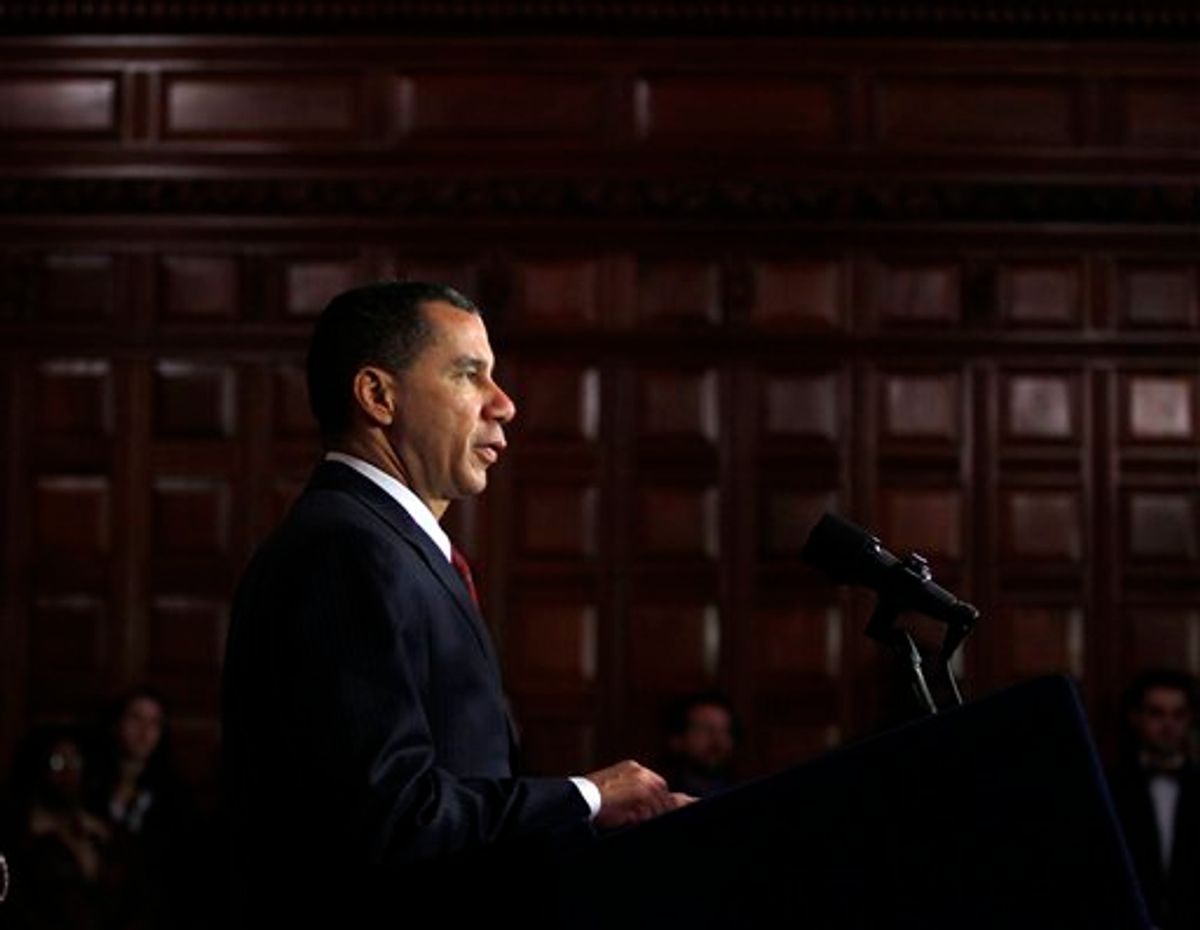 It's awfully tempting to feel sorry for David Paterson, who's been the subject of unusually public rumor-mongering this week. But the truth is that the hellish ordeal the New York's accidental governor has been enduring is his own fault.

The basic problem is Paterson's refusal to realize what has been obvious to everyone else for nearly a year now: that he's a political dead man walking. Instead of gracefully acknowledging reality, he's continued to think and act like a man who wants to run for a full gubernatorial term this fall. And that has consequences.

First, consider the freshest news -- a report from a New York City television station on Wednesday that Paterson is the subject of a federal investigation. At issue (supposedly) is the governor's decision to award a casino contract to a an investor group that includes one of the state's most prominent African-American political leaders. In the process, Paterson bypassed two bidders with extensive track records in the gaming industry.

The political leader whose group won the bid is Floyd Flake, a Queens minister and former six-term congressman. Flake has maximized his political influence by looking past party label and race in making endorsements. In the past, he's embraced George Pataki, Rudy Giuliani and Michael Bloomberg. And recently, he began saying very nice things about Andrew Cuomo, the New York attorney general who's itching to secure the same Democratic gubernatorial nomination that Paterson believes should be his.

You can see where this is going. After Flake praised Cuomo, Paterson handed Flake's group the contract. Then, three days later, Paterson and Flake sat down to talk about the governor's race.

And Flake isn't just another political leader, at least as far as Paterson is concerned. Paterson's strategy for holding off Cuomo calls for uniting African-Americans, who are currently split almost evenly between the two men. This has to do with Cuomo's own history: In 2002, he bucked the party establishment and took on an African-American candidate, Carl McCall, in the Democratic gubernatorial primary. The effort earned Cuomo considerable enmity from black leaders, and when he was forced to drop out days before the vote, his political career seemed ruined. It's taken eight years of hard work (and good luck and timing) for Cuomo to undo that damage.

So you can see Paterson's thinking: Get Flake, unite the black community, scare off Cuomo. Did he actually award Flake a casino contract as part of this plan? We don't know that. But Paterson's maneuvering has all the familiar markings of a dirty political deal -- the kind New Yorkers have seen over and over again, and the kind they expect from a governor for whom they now have little regard. If he did cut the casino deal for political purposes, then he deserves the scrutiny and suspicion it's provoked. And if the deal really was on the up-and-up, then he still should have known better: the appearance of a conflict can be just as bad politically than an actual conflict.

Of course, there wouldn't be much cause for suspicion if Paterson weren't calling himself a candidate, since there'd be no reason for him to curry favor with Flake. And by this point, Paterson ought to realize that, with or without Flake, his chances of winning an election this year are nonexistent.

His fate has been sealed ever since he turned what should have been a simple appointment to fill Hillary Clinton's Senate seat into a national display of gubernatorial incompetence. New Yorkers concluded he was in over his head and tuned him out, and ever since then, Paterson has trailed Cuomo by about 40 points in primary polling.

Just how bad a predicament is that? Well, to the best of my knowledge, there's only one instance in the modern era of an incumbent governor recovering from a comparable primary deficit: Dave Heineman (also an acting governor), who overcame Tom Osborne's massive early advantage to win the 2006 GOP nomination in Nebraska. Not that Heineman's example offers any hope to Paterson. His problem was that no one knew who he was, which he overcame with a savvy campaign. Paterson's problem is that everyone knows who he is -- and has tuned him out.

And that brings us to the other part of Paterson's week from hell: all of the ugly rumors that swirled as the political worlds -- both in Albany and Washington -- chattered about a bombshell expose that the New York Times was supposedly working on (and that has yet to appear).

It's unfortunate that Paterson (and his family) have been subjected to this. But it's also telling that, rather than defending their governor, so many Democrats were actually pushing the rumors themselves, hoping that it was all true and that Paterson would finally leave the stage. Paterson's fellow Democrats know that he'd probably lose as their nominee this fall -- taking a slew of down-ballot candidates down with him. And they hate the idea of a bloody, racially divisive primary, which could soften Cuomo up for the GOP. They'll latch on to anything they can to get him out -- now.

Of course, the opposite is happening, and Paterson is now defiantly digging in his heels, declaring on Tuesday night that he'd only leave the governorship by the ballot box or in a pine box. Fair enough. But don't feel bad for him. Politics, as the cliche goes, is a full contact sport. When you choose to play, you're going to get hurt.