Don't give in to media-inspired fatalism

It's no time to retreat, President Obama. The Democrats are still the majority party 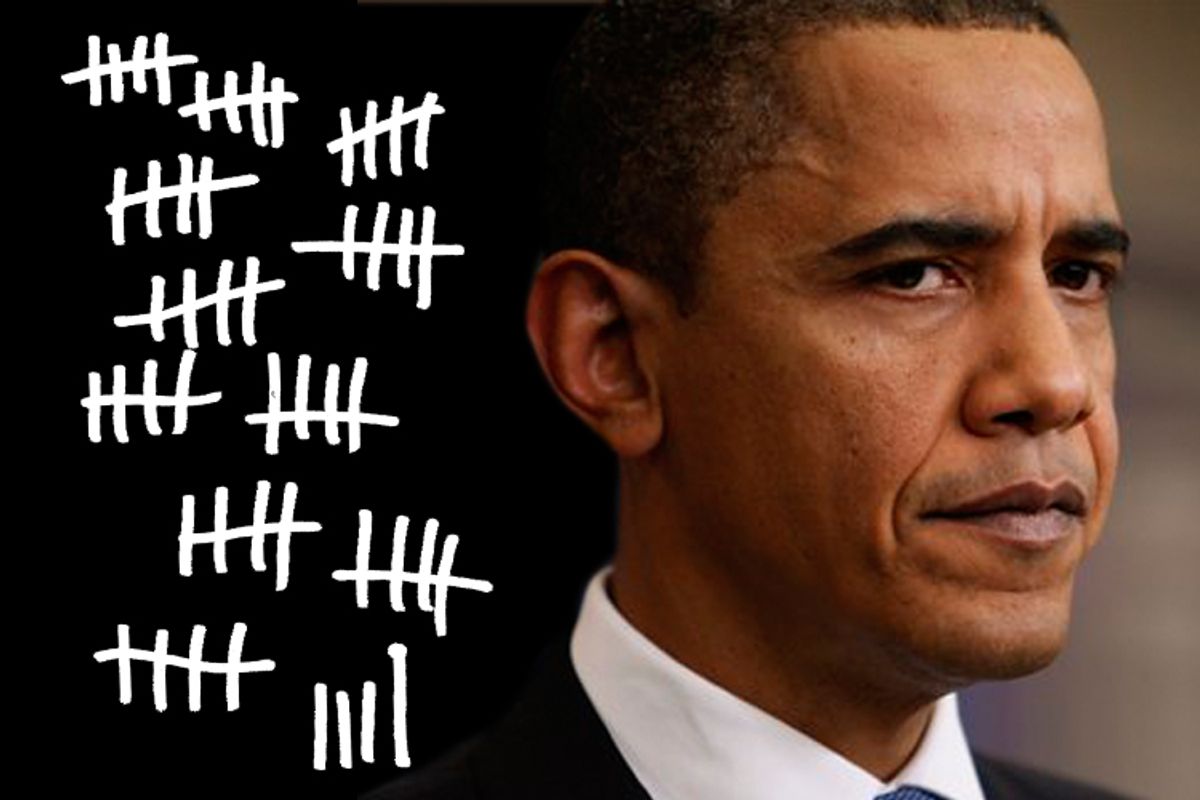 Not only has total paralysis been theoretically achieved, but our allegedly liberal "mainstream" news media treats it as entirely normal. Never mind that Republicans haven't themselves achieved a 60-vote "supermajority" within living memory. Nor that rules permitting 41 percent of the Senate to filibuster legislation to death arguably constitutes an unconstitutional violation of majority rules Republicans argued when Democrats threatened to filibuster Bush Supreme Court nominees.

The raw political truth is that the GOP reacted to its 2008 electoral losses by elevating party over country. The fundamental strategy has been to harass the Obama administration with hysterical falsehoods, prevent it from getting anything important done, then argue that Democrats are incapable of governing. So far, they appear to be getting away with it.

Maybe that's because the United States no longer has a government, I thought while watching Sarah Palin's $100,000 "tea party" speech on CNN. Instead, it has politicized infotainment, an endlessly evolving reality-TV program. Personality trumps complexity, sex appeal sells soap suds, and everything's a crisis, because conflict enhances storylines. Facts and causality can be rearranged as needed.

On all the networks, the wish to jump-start the 2012 presidential campaign -- the ultimate reality TV program -- was almost palpable.

In short, "How's that hopey-changey thing workin' for ya?" Watching Sarah, Queen of the North, wowing her Nashville fans was enough to give any rational citizen the bends. Reading from a script, she mocked President Obama's use of Teleprompters. Her fans saw no contradiction. Palin lampooned the (Bush administration) TARP bank bailouts she supported during the 2008 campaign.

Praising U.S. troops for "defending our Constitution," she sneered at Obama for teaching constitutional law -- as if it were unmanly. Like all Republicans, she pretended that treating failed Christmas terrorist Umar Farouk Abdulmutallab precisely as the Bush administration treated failed terrorists Richard Reid and Zacarias Moussaoui indicated that he was soft on terror.

Asked what Congress's top three priorities should be, Palin hastily consulted handwritten notes on her palm, then said how Republicans should cut spending (without mentioning a single particular), adopt a "drill baby drill" energy policy (as if oil aplenty lay there for the taking) and turn to God.

Washington Monthly's Steve Benen provided a verbatim transcript of the inspirational part of Palin's answer: "I think, kind of tougher to, um, put our arms around, but allowing America's spirit to rise again by not being afraid to kind of go back to some of our roots as a God-fearing nation where we're not afraid to say, especially in times of potential trouble in the future here, where we're not afraid to say, you know, we don't have all the answers as fallible men and women so it would be wise of us to start seeking some divine intervention again in this country, so that we can be safe and secure and prosperous again. To have people involved in government who aren't afraid of what the media said about them if they were to proclaim their alliance on our creator."

Translation: Our God is red-hot, your God ain't diddly-squat.

Palin's is an inchoate, purely tribal appeal, akin to her description of persons like herself as "real Americans." Making the rest of us exactly what?

That said, she's a TV personality, nothing more. It's a mistake to give in to media-inspired fatalism. Obama can only pray that a divisive lightweight like Palin is his 2012 GOP opponent. Meanwhile, as he's taken to reminding Democrats in Congress, their 59-41 Senate majority remains the largest either party has enjoyed in a generation. Democrats must advance, not retreat.

The TV networks want conflict? The Obama administration needs to give them conflict. How long did Alabama Sen. Richard Shelby persist in putting a "blanket hold" on administration nominees after his attempt to blackmail the administration into awarding a defense contract to (Alabama-based) Northrup over Boeing once the White House made it front-page news? Two days.

How long did it take House Republican leaders to start crawfishing away from Obama's proposed nationally televised healthcare summit? Also two days. See, the last thing GOP leadership wants the public to understand are the bill's conservative elements: its reliance on private, not government insurance; that it will cut the deficit and slow spending growth; that it gives consumers more choice, more security and more freedom.

So let Republicans sulk. Hold the summit without them. Then pass the bill without them, too. The president must lead his skittish party. The GOP can make Obama look weak only if he helps them.