"Private Practice": How many adorable children must die?

Sick kids have overtaken this soapy "Grey's" spinoff, where every week brings tears and a parent's worst nightmare 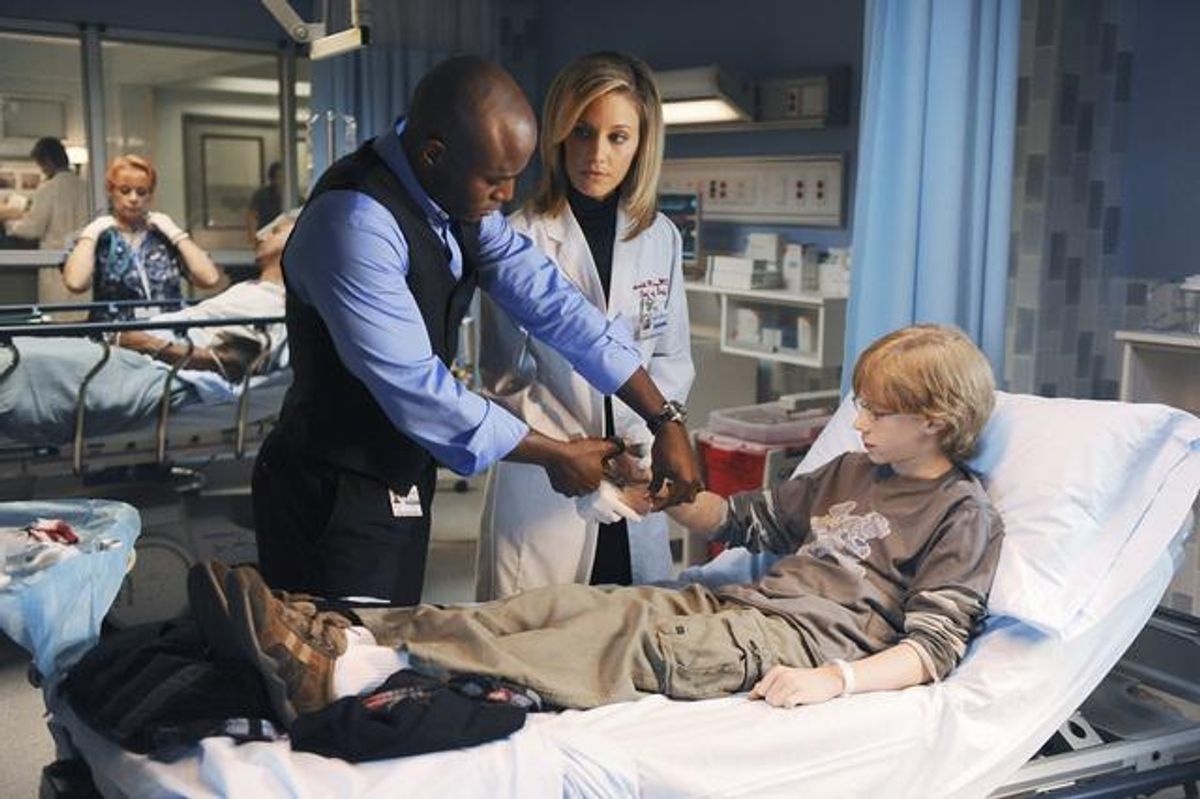 Sure, it starts out innocently enough. "Addy" (Addison, played by Kate Walsh) is dashing around the medical offices where she works, and she bumps into some snag: the practice's budget is in the red or someone forgot to make more coffee in the break room or someone's wife stopped by to call her a whore. Addy doesn't take kindly to such stressors – you'll recall that her character moved from Seattle Grace (on "Grey's") down to sunny L.A. for a change of scenery, and so Shonda Rhimes could build a whole new show around a manic, eye-rolling, sexually compulsive redhead who's also – you guessed it – the best gynecological surgeon anywhere in the known universe.

Like most busy and important surgeons, Addy spends most of her time mooning over some man or blurting out long-winded tirades about how everything is all mixed up inside of her, sort of like the spunky heroine of a Beverly Cleary novel, except with shinier hair and eyebrows plucked into a skeptical, vaguely demonic arch that says, "I'm not buying it, mister!" and also, "Should I sleep with you now, or later, during the strummy indie pop ballad montage?"

Anyway, Addy and her ragtag assortment of new-age-cliché-spewing, middle-aged, oversexed colleagues get into a colorful bickering match, and then – and this is where you have to start watching your back – a doe-eyed little child is wheeled in or hobbles in on his own or is led in by an obviously screwed-up drug addict of a parent, and even though at first it just looks like a minor subplot, soon a gaping hole opens up in the sexy-single-doctors-argue-flirting universe and the entire show is swallowed up by a deep, black abyss of sniffling toddlers with terribly negligent or uncaring parents and dead moms and single dads who can't hug their own children without giving them wretched diseases, and before you know it, you're surrounded by snotty tissues.

You think I'm exaggerating. So let's just review the imperiled-child subplot on the last few episodes of the show, shall we?

Subplot A: Adorable saucer-eyed blond boy answers door, insists his mom is "a really good mother" in heartbreakingly earnest tone, but then reveals that she's a hoarder! He's living in a puddle of his own filth! The cast on his arm is infected! Mommy, meanwhile, can't explain any of it to the drippy therapist lady Violet (Amy Brenneman). Finally, Child Protective Services is on its way over to take the little darling honey lamb away from his Mommy! Oh nooo! At the last minute, Mommy breaks down crying and admits that three years earlier she dumped her husband for no good reason! One day her ex picked up their daughter for his weekend visit and ... they both drove over a cliff and died! It was all Mommy's fault for dumping her perfectly good man, and for not letting her daughter stay home (she wanted to stay home with her brother, who was sick, but Mommy wouldn't let her!) and, well, that's why she started hoarding, the poor, poor woman! But look, she's ready to make a change! She just threw out that bag of junk! And that one! Sniff, sniff.

Subplot B: Dell, the plucky male midwife at the office, has a pretty little daughter, Betsy, with his wife, who's a former drug addict. As he's driving away from the house one night, it explodes into flames! His wife and child are seriously injured! It turns out his wife was cooking meth on the stove – and Dell had found a pipe earlier but still left his daughter alone with his wife, so it was all his fault the whole thing happened! Betsy wants to see her mommy to say goodbye before Mommy dies but Dell won't let them see each other. Mommy dies! Betsy is furious and hates her daddy forever and ever!

Subplot C: Woman gives birth to baby, but won't even hold him after he's born, because all she wants is the cord blood, which she needs to save her twin daughters' lives. But there's a hitch; there's only enough to save one daughter. Oh God, how will Mom and Dad ever choose between their two little girls? Mom flat-out refuses to choose, but Dad admits that he has a favorite, which prompts Mom to tell Dad that he's going to hell. Mom and Dad cry, baby boy cries, twin daughters cry, Addy cries, etc. Finally one daughter gets sick and they give the cord blood to the other one, and of course the camera is there so we can watch the whole family tell her, "Sorry, honey, but we're going to save your sister and let you die." Naturally, instead of telling them all that she hates their guts, the girl says something crazy like "You must survive!" to her sister, and then valiantly prepares to die as we far less valiantly cry our eyes out.

Those stories are just the tip of the iceberg. I also remember an episode where two parents ditched their kid, then admitted, when questioned, that they did it because the kid was, like, a major incovenience. Then there was another couple trying to have a baby just to harvest the cord blood. There was the single dad who couldn't be in the same room with his immunity-compromised older daughter because he would get sick and probably die if he did, but eventually he couldn't stand to see her alone anymore, so he left his toddler son behind, even though that meant he'd die and leave the kid fatherless. (And yes, we watched as he reunited with his daughter while his heartbroken toddler cried outside the door.)

How do the writers even come up with these scenarios, anyway? Do they just sit around in the writers' room saying, "Hmm ... Would it be crazy to have a kid eaten alive by enormous rats while his parents looked on, helplessly? Could we do that? What about a flesh-eating virus, that could work, couldn't it?"

The strange thing with "Private Practice" is that you think you're watching this middle-aged, professional-class, not very funny, not very sexy version of "Sex and the City," and then suddenly you're surrounded by miserable, weeping children and bad, sick, confused, exhausted parents. Next time we're looking for those kinds of kicks, we'll skip the little shop of melodramatic horrors and hang out in the sick kids' waiting room at the local children's clinic instead.