The designer's death at 40 is a reminder that thought, precision and wit are rare and endangered qualities 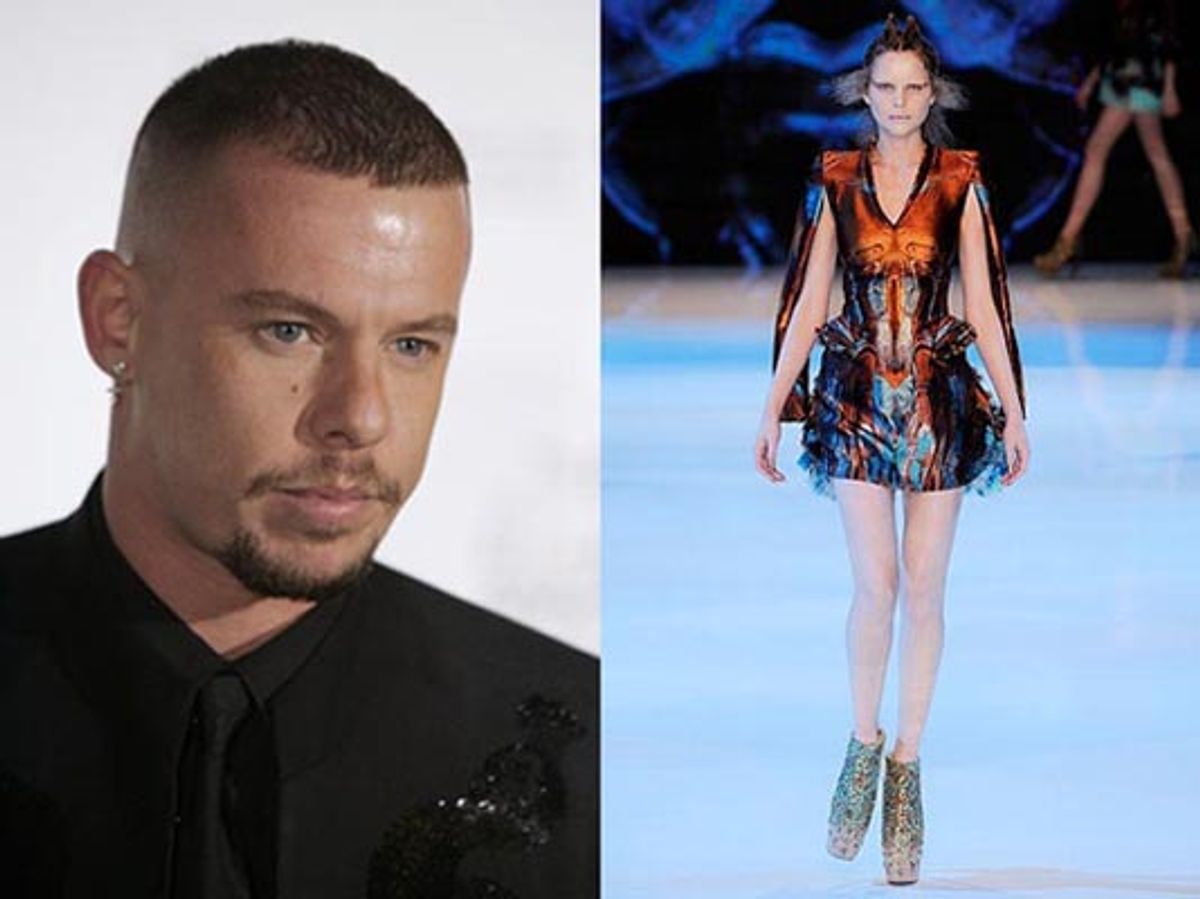 Alexander McQueen and a Spring 2010 creation
--

There's a distinction to be made between people who simply don't follow fashion and those who take pride in asserting how little they care about it. But both groups -- in fact, anyone who cares about the culture at large -- should take note of the death of Alexander McQueen. For every 1,000 so-called designers who pin a piece of jersey around a mannequin and call it fashion, there's only one McQueen, an explosively imaginative designer who openly courted controversy (he called one of his early collections, a mix of military jackets and torn-lace dresses, "Highland Rape") but who also treated craftsmanship as a foundation and not an afterthought (he began his career as an apprentice on Savile Row, helping to construct custom-made suits for the likes of Prince Charles and Mikhail Gorbachev). In a world where fashion churns through chain stores like H&M and Forever 21 at a dizzying and alarming rate, McQueen's death at age 40 is a sad reminder of the way certain values have been misplaced in our culture: Not just in fashion but in all creative fields, thought, precision, wit and a sense of history are rare and endangered qualities.

McQueen -- whose first name was Lee, but who used his middle name, Alexander, professionally -- was born in Hackney, London, in 1969, the son of a taxi driver. His early ambitions were modest: He left school at age 16 and, after working on Savile Row for a number of years, had stints doing design work in Japan and Italy (in Milan, he worked for Romeo Gigli). In 1994 he returned to London, hoping to become a pattern-cutting tutor at Central St. Martins College of Art and Design, but his design portfolio was so strong that he was encouraged to enroll as a student. And it was as a student that he met his first customer, the British aristocrat and fashion stylist Isabella Blow, who would become one of his closest friends. Blow was so impressed by McQueen's student work that she commissioned him to make clothes for her. He'd show up to meet her with his latest creations wrapped up in bin liners (or, as we'd call them in the States, garbage bags). She paid him on the installment plan, purchasing one item a month at the rate of £100 per week.

McQueen worked as head designer at Givenchy from 1996 to 2001, during which time he ruffled his share of feathers. But even then, his sense of showmanship never eclipsed his devotion to beauty and workmanship: In a 1999 Givenchy show, he sent amputee athlete Aimee Mullins down the catwalk in a pair of specially made prosthetic legs. These faux legs, hand-made from ash, featured magnificent carvings of magnolias and grapevines, an example of William Morris' Arts and Crafts movement ideals brought vividly to life.

After leaving Givenchy, McQueen entered a partnership with Gucci that allowed him to expand his own brand. But in a difficult and often ugly business, McQueen managed to walk a deft line between continuing to make daring and innovative clothes but also -- thanks in part to his tailoring skills -- making pieces that women could actually wear. The latter category includes the line McQueen designed for Target last year. But McQueen's most astonishing recent creations definitely fall into the former group. He has designed looks for work-of-art pop star Lady Gaga. For his last show, Spring 2010 (which was streamed live on Show Studio, the web site run McQueen's friend, the photographer Nick Knight) McQueen sent his models down the catwalk in an array of snakeprint-and-butterfly-wing photoprint dresses, with soft shoulders and bouffant skirts (wearable enough, if you've got the right body and the right occasion to don such garments). But the shoes -- the shoes! -- could not safely be worn by any mere mortal. It was astonishing that none of the models fell off them, and although lots of people in the fashion world clamored to get a hold of them, there were few to be had: These were shoes designed purely for fantasy, not for real life, and McQueen himself knew it.

The shoes can best be described as a kind of an alien bootie, a triple cross between a '40s platform, a pointe shoe and a Clydesdale's hoof; some of them were made of python skin, no less. This wasn't a shoe made for walking, but for show. It represented the apotheosis of obsession. You might call it the footwear equivalent of the Michael Powell film "The Red Shoes," a cautionary tale, rendered in leather, about how the pursuit of beauty and perfection can destroy you.

Then again, sometimes it can just make you laugh, and McQueen's designs often did that: Old-fashioned ladies' walking suits rendered in oversized houndstooth, with jumbo ruffles marching down the front; jackets that resembled painted suits of armor, luxury wear for a warrior queen; lots and lots of tartan, cut into flirtatious curves and bustles. McQueen was scheduled to show his next collection in Paris on March 9. His death, which appears to have been a suicide, came just days after his own mother died. (Blow, his dear friend and patron, committed suicide in 2007.)

But in the interest of turning one very sad ending into a kind of rebirth, I direct you to a link on the Show Studio site, where you can find a pattern -- accompanied by very cursory instructions -- for a McQueen kimono jacket you can make yourself. It's not for the faint of heart, and I challenge those who think fashion is only for brainless no-talents to try their hand at constructing it. (And please send me pictures if you do.) Even if you don't have the guts to commit scissors to fabric, have a look at the pattern pieces and see if you don't marvel, as I do, at the wonder of something that's more than just a diagram. How does a flat shape like this become a 3-D confection that comes to life on the contours of a body? Who not only dreams up such a thing, but drafts the essence of it on paper so it can be turned into a reality? Alexander "Lee" McQueen lived in the sweet spot where brashness and attitude meet the poetry of craftsmanship. He didn't just shock; he could also cut.