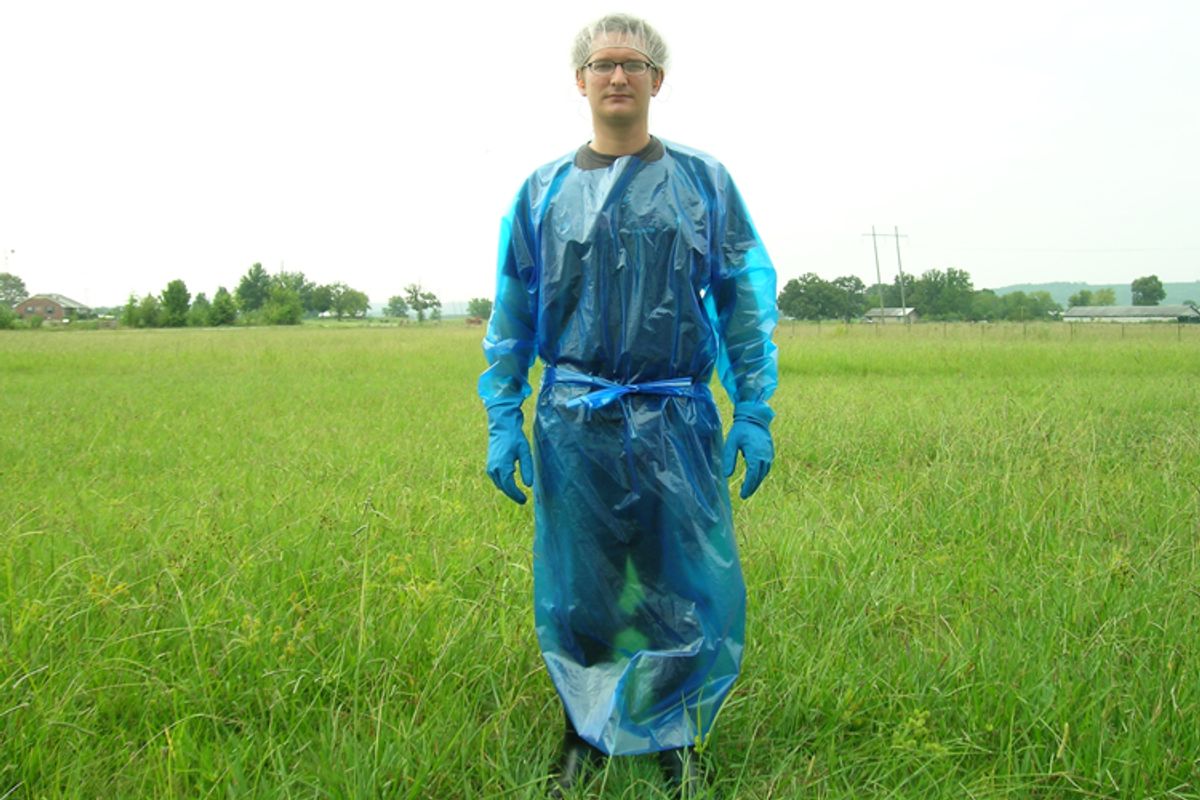 It's great that, in the age of locavorism, more people are asking where their food comes from, but Gabriel Thompson asked a different question: Who does your food come from? Cute little farmers' markets aside, the vast majority of us still eat lettuce harvested by immigrant labor, packed in Arizona, and shipped to our supermarkets all over the country. And it’s the stories of those often invisible workers in lettuce fields, in chicken plants, on delivery bikes, that Thompson finds while living and working with them for months at a time in his new book, "Working in the Shadows."

In these jobs, he meets people who have no other options, but also people who are grateful for the economic stability work offers them, people who take great pride in their skills with lettuce, and people who can't tell if it's their fingers or their minds that are more numb while tearing apart chicken breasts on an icy assembly line.

Salon spoke with Thompson about the relations of immigrants and locals in these industries, how he managed to not realize he was writing a book on food, and about how breaking your back while harvesting lettuce can be kind of … fun.

The part of the book on working in Yuma, Ariz., lettuce fields is called "Salad Days." At first that just sounds like an ironic joke, but that time does seem to be the most positive experience in your project.

Yeah, there was something very lighthearted in it. The work itself was the most physically demanding, and I contemplated walking away from it more than the others because of the pain in my hands and back. But there were things that made it more pleasurable.

One, people, our crew, was always looking out for me. And not just me -- people would jump in and help each other out. No one used the word "solidarity," but there was a sense of worker solidarity, that we're all in this together. My crew was at first concerned that I was some kind of undercover agent, but then later was just worried that I had some sweating problem I should have checked out. For my last day, they put together a huge meal for me, and the foreman gave us twice as long as normal for lunch, a full hour.

Two, there's something about working outside versus in a depressing plant that just feels psychologically healthier, even though in two months in the fields, I never saw a single insect. They had that much fumigation going on.

And three, there was a sense of pride in the workers in their abilities. "We want you to tell your friends what it's like out here, how their salad got there," they told me."It's the toughest work around, and we're good at it." It helps a lot if you have pride in what you do. If you believe it's important and not many people can do it, you can put up with a lot of crap.

Can you talk about that pride? What are lettuce skills?

Well, first, you don't pick lettuce, you cut it. So you have to bend down and stab it to separate it from the ground, then trim the outer leaves off before it starts to look like something you'd recognize. It would sometimes take me 30 seconds, and others would have it cut and bagged in just a few seconds. In low points, dribbling sweat all over the stuff, I would just slice the heads up and crush them like they were defective. At one point my co-worker called me the "Lettuce Assassin."

I thought it was just going to be backbreaking work. Well, after a while, my endurance was increasing, and yet my maximum speed for cutting one row was like everyone else's relaxed pace for cutting two. So what I thought was an "unskilled" job is in fact very skilled. With every new head of lettuce cut I learned something new, so the chance to constantly try new theories, like different movements, made it interesting.

Towards the end I was getting a little nostalgic, but the last two days we harvested more than 40 tons of lettuce, and that beat the nostalgia right out of me.

Did work in the chicken plant ever seem challenging in that good way?

In the poultry plant -- and this is purposeful -- all the jobs have been deskilled to the point where anyone can be bored within five seconds; it's something a monkey can do. The turnover is so high, they don't want to train anyone new. One week I was there, they had rehired 10 percent of the entire workforce. You'd think it was easy, but it's much more difficult, because you go a little crazy. You're just grabbing a chicken breast and tearing it in half 7,000 times a day. You can't have conversation because you've got headphones on from the machine noises. You have to stand still. Half of my orientation class left within one week.

One day, I had a revelation: that chicken breasts look like the butts of white babies. And that was probably my single thought in that five-hour session.

Was there much of a sense among the people you worked with that they had other economic options?

What was most shocking of all to me was rural poverty for Americans. Russellville is where people bounce between two jobs -- Walmart or the poultry plants. You just can't work in the poultry plant very long before you have health problems. It's just designed very clearly without the health of workers in mind. Lots of repetitive stress injuries in this push for everything being cheap: Who can get the cheapest chicken to McDonald's?

There had been a KKK march before I showed up, so I expected lots of animosity between locals and immigrants. But the Guatemalans were treated almost like foreign exchange students, more with curiosity than animosity. And it turns out that no one believed that immigrants were taking jobs away from Americans. People didn't have the jobs because they couldn't stand them.

One night, we were tearing breasts in half, and the supervisor comes over and says, "You have to work as hard as possible, this is really important!"

And Kyle said, "What is this, national security?" There was this sense that this stuff is cheap and we are treated like we are cheap.

You wrote a book about life in lettuce fields, working in a chicken plant, and being a restaurant delivery boy. So how is it that you didn't set out to write a book about food?

Well, my general take on food was always: "Where is it, and can I have some?" So, honestly, it wasn't until groups like Slow Food started asking to talk with me that I thought that maybe this book can help people in the food movement go beyond "Is this food safe for my kids?"

For me, it's as much about the woman who couldn't stay awake, falling asleep while standing because she worked the night shift and took care of her kid during the day. I wrote this, to the best of my ability, as a portrait of immigrant work, which is the subject of lots of loud, abrasive conversation, but which people have so little sense of in their everyday lives. I just hope that the book will let people pause for a minute and think about the work they do that supports us.

Before I got to Arizona, to get ready, I was doing push-ups and I bought a biography of John Steinbeck. I read about him talking about wanting to write, supporting himself through hard manual labor, like digging ditches. And what he realized after not too long was that he didn't have any creative energy at the end of the day to write. That was one of the lessons to me early on, how privileged I am. In Yuma, I was in bed, exhausted, every night by 8. Creative work can be angst-filled, but it's a privilege to have the energy to even think of doing it.