Why is Harry Reid picking a fight with Senate Republicans over a wimpy jobs bill? 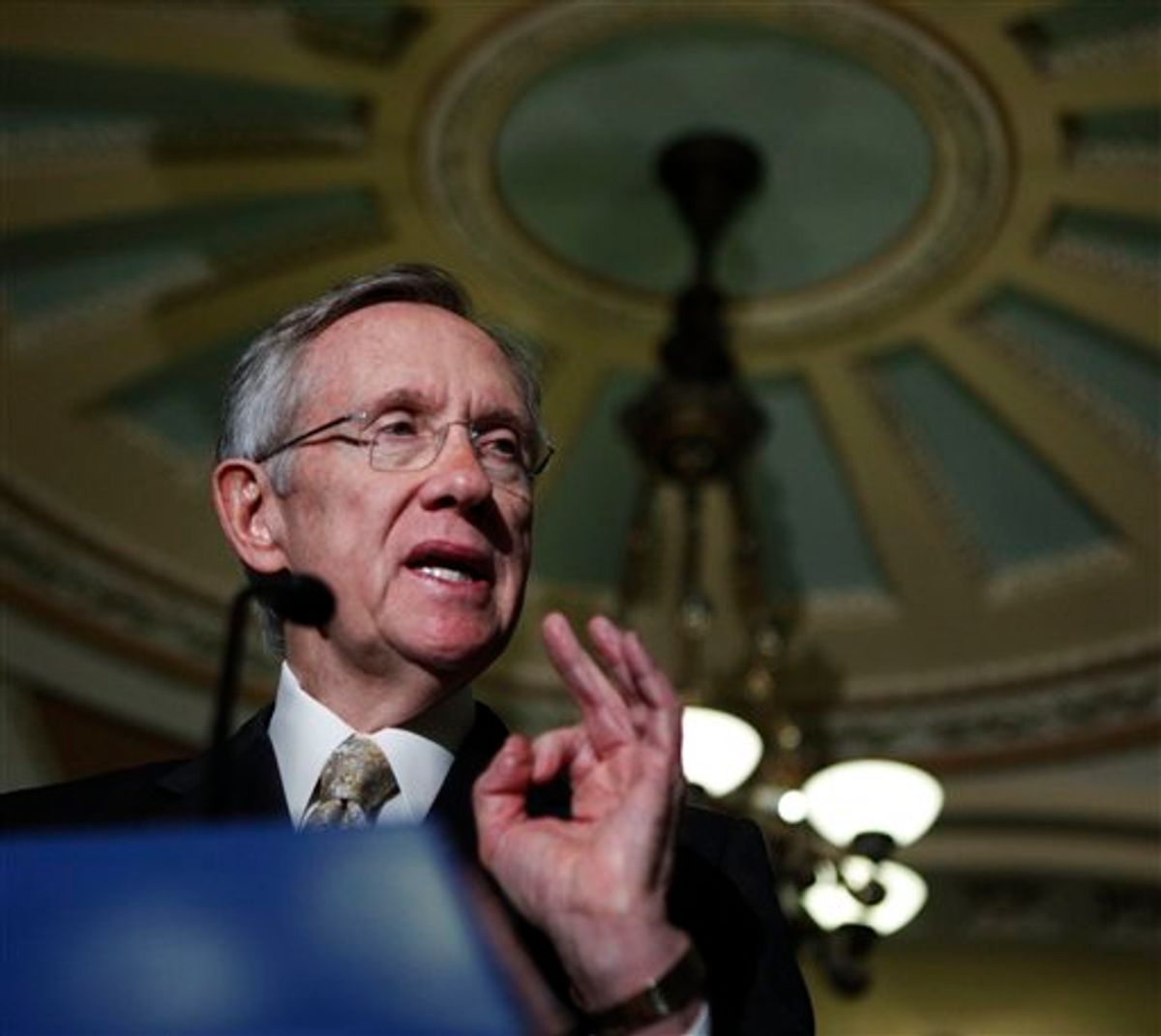 What the hell is Harry Reid up to? Judging by various news accounts, the Senate Majority Leader managed to simultaneously annoy and surprise Republicans, the White House, and powerful members of his own caucus when he jettisoned the "bipartisan" Baucus-Grassley jobs bill Thursday afternoon, and promised to bring a new, "streamlined" proposal to the floor next week.

If it's true, as Ezra Klein suggests, that Republican support for Baucus-Grassley was traded in return for Democratic agreement to support GOP desires on estate and gift taxes, then maybe it makes some sense. The same goes for the $31 billion of "tax extenders" Republicans wanted to tack on to the bill. A jobs bill ought to be focused on jobs.

Which is what Reid is saying, when he isn't complaining about the demands expressed by both Democrats and Republicans for special items that absolutely, positively must be included in the bill. Fair enough.

But what do we have now?

The bill now includes four components: tax credits for employers who hire new workers; a provision allowing businesses to write off the cost of capital investments; Build America Bonds, which allow state and local governments to lower their borrowing costs; and a one-year extension of funding for transportation programs in the Surface Transportation Act.

All at a price tag of $15 billion dollars.

$15 measly billion dollars?! It wasn't so long ago that the U.S. Treasury was forcing $25 billion dollar checks on every big bank in New York, whether they wanted the money or not. $15 billion is a drop in the bucket compared to the size of the current unemployment problem. The House has already passed a $150 billion dollar jobs bill, and even that doesn't come close to what the White House recommended in its proposed budget.

Reid's proposal doesn't even include extensions in unemployment or health insurance benefits, absolutely critical elements in providing increased security for the millions of currently unemployed. The New York Times rightfully gets its dudgeon on:

With 14.8 million Americans unemployed -- more than 40 percent of them for more than six months -- the smaller package is so puny as to be meaningless. Most of the $15 billion would cover the cost of a payroll tax holiday in 2010 for employers that hire unemployed workers. Since there are more than six unemployed workers for every job opening, a tax break for hiring is worth a try. But the proposed credit is too small to have a noticeable impact. At best, it would create about 250,000 additional jobs from April through the end of the year, according to an analysis by Moody's Economy.com.

Reid appears to be calculating that Republicans will look bad if they vote against a stripped down jobs bill. And sure, there are plenty of people on the left who would love to see Senate Democrats actually force a showdown with Republicans. But if you're going to pick a fight, why not choose something meaningful to go to war over? Right now we've got the worst of all possible worlds: The very likely prospect of extended political gridlock while senators fight to the death over  a jobs bill that will hardly make a difference.