How Iran checkmated the dissidents

When protesters tried to mobilize, the government anticipated their every move 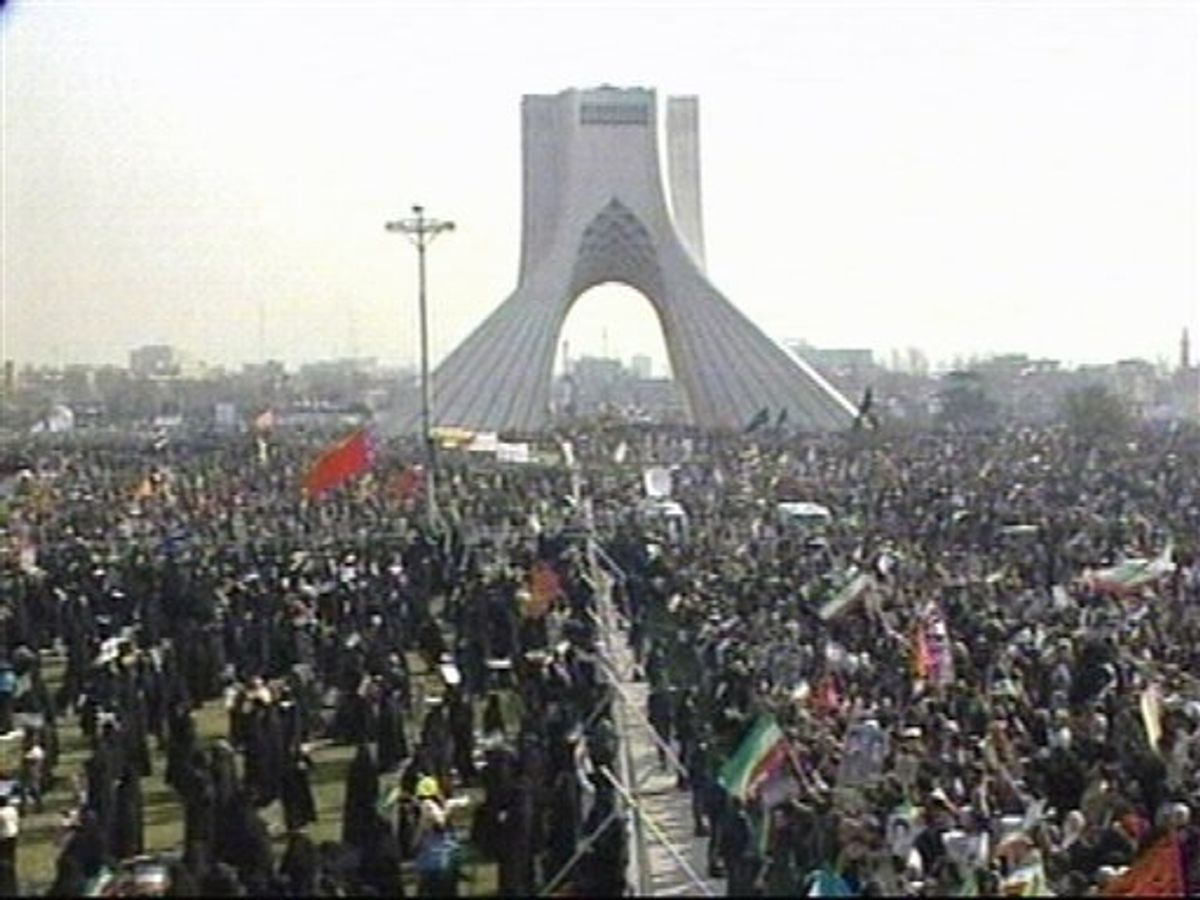 An image made from video provided by Iranian State TV, pro-government demonstrators gather in the central square of Tehran to mark the 31st anniversary of Iran's 1979 Islamic Revolution Thursday Feb. 10, 2010. (AP Photo/IRIB via APTN) (AP)
--

The opposition press in Iran says that former presidential candidate Mir Hossein Mousavi attempted to go to Azadi (Freedom) Square in downtown Tehran on the occasion of the commemoration of 31 years of the Islamic Revolution in Iran, but was prevented from doing so by a phalanx of plainclothesmen. Mousavi had been prime minister under Imam Ruhollah Khomeini in the late 1980s, but is now marked as a dissident by Khomeini's successor, Ali Khamenei.

In the crowd at Azadi Square, Green Movement supporters who unfurled banners or chanted "down with the dictator" were said by dissident web site Kalemeh.org to have been swiftly arrested by plainclothesmen stationed in the crowds for this purpose.

Interestingly, the authorities did permit former presidents Akbar Hashemi Rafsanjani and Mohammad Khatami to attend the huge rally at Azadi Square. Did these two give undertakings that they and their followers would not attempt to use the occasion to promote protests? Why were they treated so differently from Mousavi, whom they support?

Mousavi's, wife, prominent "Islamic feminist" leader Zahra Rahnavard, attempted to attend a protest rally at Sadeghieh Square, but she was likewise surrounded by plainclothesmen, who began cursing and beating her. Supporters her spirited her away. At Sadeghieh Square itself a small rally was broken up by security forces and plainsclothesmen, who arrested a number of people. AFP quotes opposition sources saying that tear gas and the brandishing of knives were used in the repression. Other rallies of oppositionists were treated with similar brutality.

As this unverified video shows, anti-riot police in full battle gear were also inserted strategically into the crowds.

The Guardian quotes a disheartened dissident: "There were 300 of us, maximum 500. Against 10,000 people," one protester told the Associated Press. "It means they won and we lost. They defeated us. They were able to gather so many people. But this doesn't mean we have been defeated for good. It's a defeat for now. We need time to regroup."

Mehdi Karroubi, another dissident and former presidential candidate, was also stopped by plainclothesmen from reaching Sadeghieh Square, by regime tear gas. He is said to have developed difficulty breathing. He was also hit on the head by a stone cast at him, but was not seriously wounded. His bodyguards are said to have been injured. In an interview, his son describes his father's condition and expresses concern about the whereabouts of his brother (Mehdi Karroubi's other son), Ali. Some say the latter was arrested.

AP reports on the pro-regime rally at Freedom Square on Thursday:

I have to admit puzzlement about the actions of the leadership and rank and file of the Green Movement on Thursday. Mousavi, Rahnavard and Karroubi appeared to think they would be allowed to go to anti-regime rallying sites, and proceeded in public so that they were easily identified and stopped. The demonstrators also appear to have acted predictably, such that the regime was ready for them and successfully broke up the rallies. I have to wonder whether the regime has not managed to insert spies into the informal leadership of the inchoate Green Movement, or tapped their phones or something, because they appear to have have anticipated their every move.

Some Green Movement supporters objected to my characterization of Thursday as a 'failure to mobilize,' saying that I wasn't taking into account the sheer brutality of regime measures. But it is a given that this regime is brutal. It was brutal on Ashura (December 27, 2009), but the Greens nevertheless managed to make an impressive showing, and despite regime foreknowledge that it would be a flash point.

What I would say is that coming off the Ashura protests, the Green Movement had the momentum and the regime was under pressure. The rallies had spread to a number of cities, including conservative ones like Isfahan and Mashhad. The crowds seemed to be turning on Supreme Leader Ali Khamenei.

After Thursday, the momentum is now with the regime. Either the Revolutionary Guards are getting better at countering the dissidents or movement members are tired of getting beaten up with no measurable political impact. As I wrote yesterday, the regime blocked the "flashmobs" by interfering with electronic communication (Gmail, Facebook, Twitter). They also thought strategically about how to control the public space of major cities, resorting to plainclothesmen rather than just uniformed police squads. It is also possible that President Mahmoud Ahmadinejad's brinkmanship with the West over Iran's civilian nuclear enrichment program is causing the Iranian public to rally to the regime in the face of American, Israeli and European threats.

The Green Movement cannot depend on being able to go on indefinitely mounting big public demonstrations, especially since the cost to the protesters is rising, with beatings, firing of live ammunition, mass arrests and executions. It also cannot continue to depend on informal networks to organize, since these can be fairly easily disrupted.

Mousavi has said he refuses to form a political party. There are such parties or at least vague groupings in Iranian politics -- former president Akbar Hashemi Rafsanjani leads one -- and they have members of Parliament. By refusing to develop a grassroots political organization, Mousavi may be making the same mistake as former president Abo'l-Hasan Bani-Sadr, who was toppled from the presidency in summer, 1981, because he declined to seek a mass organization, whereas his enemies had the "Hezbollah" popular militia and the Islamic Republican Party that grouped key hard line clerics. Ahmadinejad has his Alliance of Builders in Tehran, and is backed by the Revolutionary Guards, the Basij paramilitary, and other security forces. Mousavi has the little flashmobs who couldn't, at least on Thursday.