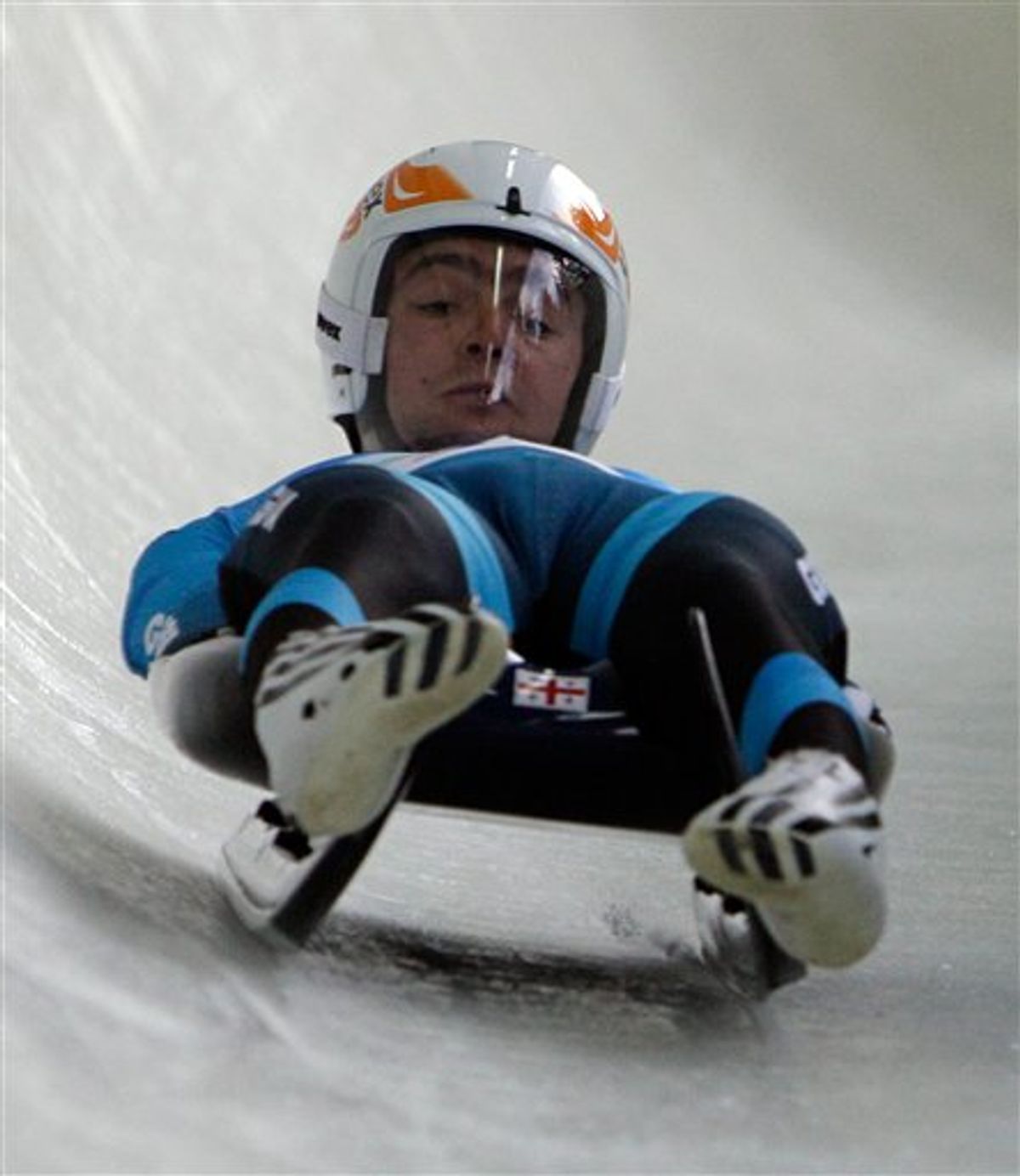 Nodar Kumaritashvili of Georgia is seen just before crashing during a training run for the men's singles luge at the Vancouver 2010 Olympics in Whistler, British Columbia, Friday, Feb. 12, 2010. (AP Photo/Ricardo Mazalan) (AP)
--

A men's luger from the former Soviet republic of Georgia died Friday after a crash during training, an Olympic official with direct knowledge of the situation said. The death cast a shocking pall over the Vancouver Olympics hours before the opening ceremony.

The official told The Associated Press that the International Olympic Committee received confirmation of Nodar Kumaritashvili's death. The official spoke on condition of anonymity because the 21-year-old luger's family hadn't been notified yet.

There was no immediate comment from Vancouver organizers, international luge officials or the International Olympic Committee. At the Whistler track, officials said the IOC and VANOC were preparing a joint statement to be released Friday afternoon.

Kumaritashvili lost control of his sled, went over the track wall and struck an unpadded steel pole near the finish line at Whistler Sliding Center.

Rescue workers were at his side within seconds, chest compressions and mouth-to-mouth resuscitation started less than one minute after the crash, and he was quickly airlifted to a trauma center in Whistler.

Kumaritashvili struck the inside wall of the track on the final turn. His body immediately went airborne and cleared the ice-coated concrete wall along the left side of the sliding surface. His sled remained in the track, and it appeared his helmet visor skidded down the ice.

Olympic competition in men's luge is scheduled to begin Saturday. It's unclear if that schedule would be affected.

It was unclear how fast Kumaritashvili was going, although many sliders have exceeded 90 mph on this course. The track is considered the world's fastest and several Olympians recently questioned its safety. More than a dozen athletes have crashed during Olympic training for luge, and some questioned whether athletes from smaller nations -- like Georgia -- had enough time to prepare for the daunting track.

At the finish area, not far from where Kumaritashvili lost control, athletes, coaches and officials solemnly awaited word on Kumaritashvili before eventually being ushered away. Access to the crash area was closed within about 30 minutes.

"I've never seen anything like that," said Shiva Keshavan, a four-time Olympian from India.

The remainder of men's training was canceled for the day, with VANOC officials saying in a release that an investigation was taking place to "ensure a safe field of play."

Earlier in the day, gold-medal favorite Armin Zoeggeler of Italy crashed, losing control of his sled on Curve 11. Zoeggeler came off his sled and held it with his left arm to keep it from smashing atop his body. He slid on his back down several curves before coming to a stop and walking away.

Training days in Whistler have been crash-filled. A Romanian woman was briefly knocked unconscious and at least four Americans -- Chris Mazdzer on Wednesday, Megan Sweeney on Thursday and both Tony Benshoof and Bengt Walden on Friday in the same training session where Zoeggeler wrecked -- have had serious trouble just getting down the track.

"I think they are pushing it a little too much," Australia's Hannah Campbell-Pegg said Thursday night after she nearly lost control in training. "To what extent are we just little lemmings that they just throw down a track and we're crash-test dummies? I mean, this is our lives."