How does a country known for its modesty put on a glitzy opening ceremony? Answer: It doesn't 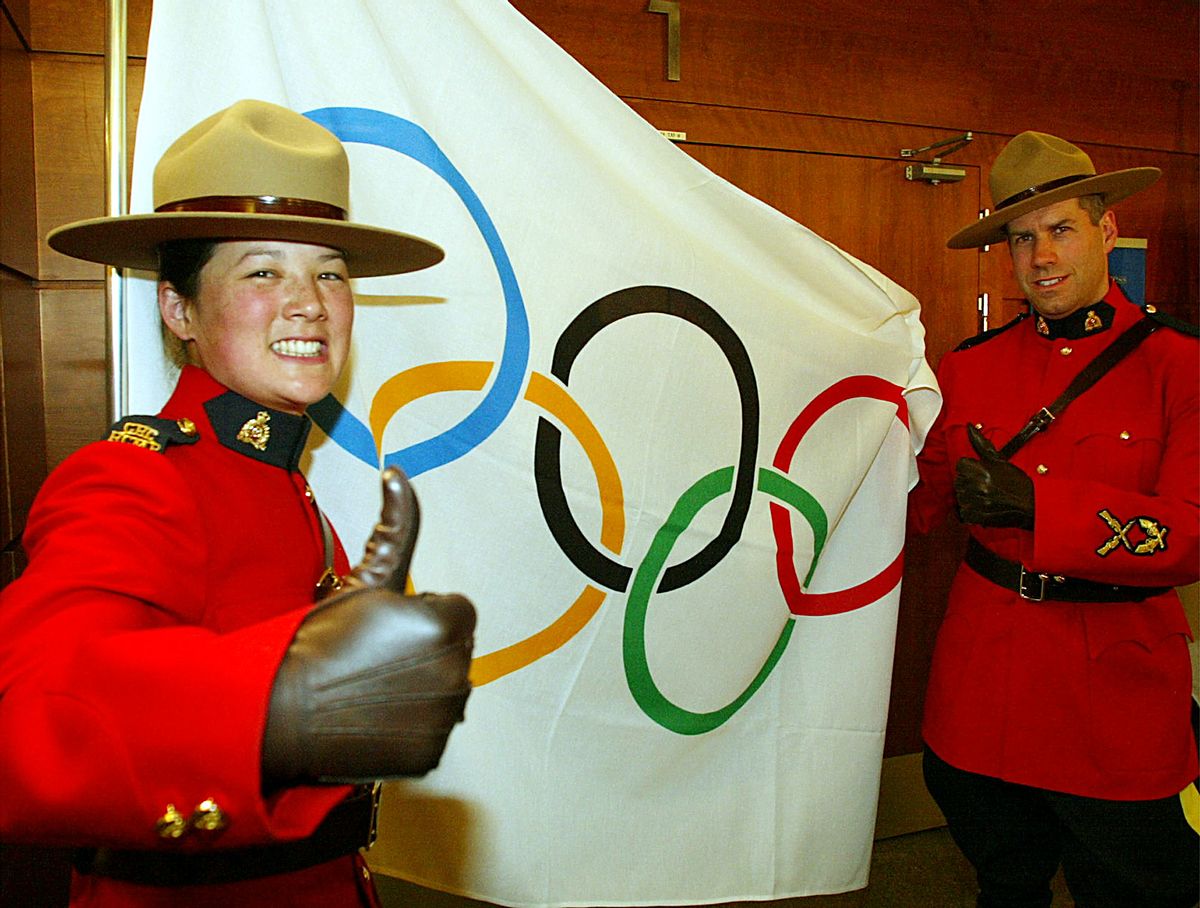 As a Canadian living in New York for the last four years, I know full well what most people think of my country's showmanship skills. During my first week here, one of my graduate school classmates approached me after class.

"Can I ask you a question about Canada?" he asked.

Sure, I replied, expecting something about healthcare or Anne Murray. Nope.

"Why are all you Canadians so terribly boring?"

Canadian national identity has always been a curious mixture of American populism and British propriety, a fact that, along with our climate, geographical size and complicated relationship with our neighbor to the south, has led us to be suspicious of acting too impulsively or dramatically. Some people might call that boring; we call that prudent. We’re the only country in the Americas to have gained our independence from Europe without violence -- choosing, instead, to pursue it through a series of incremental accords. As Pierre Berton, Canada’s best-known historian, put it, "If this lack of revolutionary passion has given us a reasonably tranquil history, it has also, no doubt, contributed to our well-known lack of daring."

Friday night, when the Vancouver Olympics kick off their opening ceremonies, it will be Canada’s turn to put on a global show, and it’s fair to say nobody’s expecting a rerun of Beijing 2008: Estimated to cost over $100 million, that affair offered a spectacular mix of highbrow artistry and technical razzle-dazzle, with approximately 14,000 performers, a 16-ton globe that emerged from the stadium floor, footprint-shaped fireworks marching across the sky, and a jaw-dropping floating torchbearer. So how does a country built on self-effacement celebrate itself in front of the entire world?

Sure, we’ve had our moments of national pageantry, most notably the successful 1967 World's Fair in Montreal, which was timed to coincide with the centennial anniversary of Canada's birth. But the World’s Fair was more about celebrating utopianism than Canada itself. The 1976 Olympics in Montreal were marred by financial difficulties, and their most noteworthy piece of pageantry was a leaning Olympic stadium that has since become a symbol of poor planning and excess. (It wasn't finished in time for the games, and in 1986 a part of its tower fell into the playing field.)

When the Calgary Olympics debuted in 1988, the opening ceremonies were conspicuously low on patriotism, and high on pioneer nostalgia and '80s kitsch. The ceremony included purple-clad square dancers, the Calgary Stampede show band, stagecoaches and, of course, people in dinosaur costumes dancing on a float (presumably to celebrate the region’s proud history of paleontological discovery). As (Canada-born) Peter Jennings said during the newscast, "Have you ever seen a more spontaneous opening ceremonies?"

Unfortunately, Canadian history is rather difficult to turn into a three-hour pageant for worldwide consumption. Take, for example, Canada’s founding moment: the British North America Act, the 1867 agreement signed by Queen Victoria that united the British colonies of Canada, New Brunswick and Nova Scotia (but not the areas now know as Manitoba, British Columbia or Alberta, among others), created the Canadian parliament, and gave us control over our domestic agenda (but not our foreign policy or our courts).

Try turning that gem into a rousing dance number. Sure, you can dress up Shania Twain as a Father of Confederation, create a 10-foot fire-breathing animatronic Queen Victoria that floats down from the stadium ceiling, and throw in some lasers for extra flash, but, in the end, people would still just be sitting around signing things and you’d need a PowerPoint presentation to explain to the world what exactly happened. And then, of course, you’d have to repeat it again, in 1931, with the signing of the Statute of Westminster, and in 1982, when Queen Elizabeth II signed the Canadian Charter of Rights and Freedoms.

But the modesty of our history and national iconography is a big part of what makes Canada so wonderful. (As any Canadian schoolchild can tell you, one of our proudest accomplishments is the fact that we built the mechanical arm on the American space shuttle.) You could probably reenact Canadian Frederick Banting's co-discovery of insulin by rolling in a glittery pancreas and dressing up dancers as sugar. (This could be a great cameo for Ontario-born Avril Lavigne.) Or celebrate the founding of our nationalized healthcare system by having a few hundred people ceremoniously dance around in crutches and arm-slings to a Rush song. But not only would that be awkward, it would be downright un-Canadian.

At times, our penchant toward quietness has gotten us in trouble. During the 1992 World Series, the Toronto Blue Jays had to beg fans to make more noise, not less. When the 2001 World Championships in Athletics were held in Edmonton, my hometown, the British press nicknamed the city Deadmonton (though clearly they hadn't seen the world's largest sausage). Most recently, Billy Bob Thornton railed against the quietness of Canadian fans by comparing them to "mashed potatoes without the gravy" during his radio outburst.

So what can we expect to see when the ceremonies begin on Friday night? John Furlong, CEO of the Vancouver Organizing Committee, has said that the opening ceremonies will "tell the story of a contemporary Canada that will inspire the world." Naturally, they’ll be produced by an Australian -- David Atkins, the same man who created the opening and closing ceremonies for the Sydney Olympics. It has been announced that neither Cirque du Soleil, the French-Canadian circus group, nor the Vancouver Symphony Orchestra will be participating. None of which suggests that Beijing has anything to worry about.

Vancouver’s Opening Ceremonies, like all Olympic openers, will have to pander to a worldwide audience -- which means nothing shocking or edgy. If it goes down the cliché route, its central character will be a child on a voyage of discovery. The ceremony will likely pay tribute to the region’s native population (the Games' controversial official logo is an inukshuk, a small pile of rocks used as markers by Canada's northern Inuit) along with Vancouver’s Chinese immigrant community. It’s likely that hometown hero Bryan Adams will be making an appearance, and if there’s anything life has taught me, you can never predict when Celine Dion will do something baffling in a ridiculous costume.

But here's one prediction: It’s likely that the ceremonies will neither blow viewers away nor leave them disappointed. And in some ways, that’s the point. The things about "contemporary Canada" that are worth celebrating couldn't (and probably shouldn't) be represented on a float anyway. We may not have built many epic monuments, or dazzled the world with our conquests, but over the course of the last century and a half we’ve built a successful model for a liberal, progressive multicultural democracy. So much so that, these days, the American dream is more feasible in Canada than it is in America.

Canada has higher class mobility than the United States. It has low crime rates, universal healthcare and a widely praised refugee system. Its banking system has been touted as a model for the United States. Gay marriage has been legal for the better half of a decade. As researcher Michael Adams recently argued in "Fire and Ice," his book about Canadian values, polls show that Canadians' attachment to social liberalism and "postmodern postmaterial multiculturalism" (try spelling that out on the floor of a stadium) continues to grow, even as American values move in the opposite direction.

Does that mean that we’ll be wowing the world Friday night? Probably not. But does it make Canada a pretty great country to host the Olympic Games? Most definitely. If anything, it’ll ensure that, for once, the focus of the event will be on the athletes, not on our rain-preventing technology, computer-generated fireworks, or how we kicked a young child out of our ceremony for not being pretty enough. Sorry, Beijing. Props to you, but that’s just not our style.