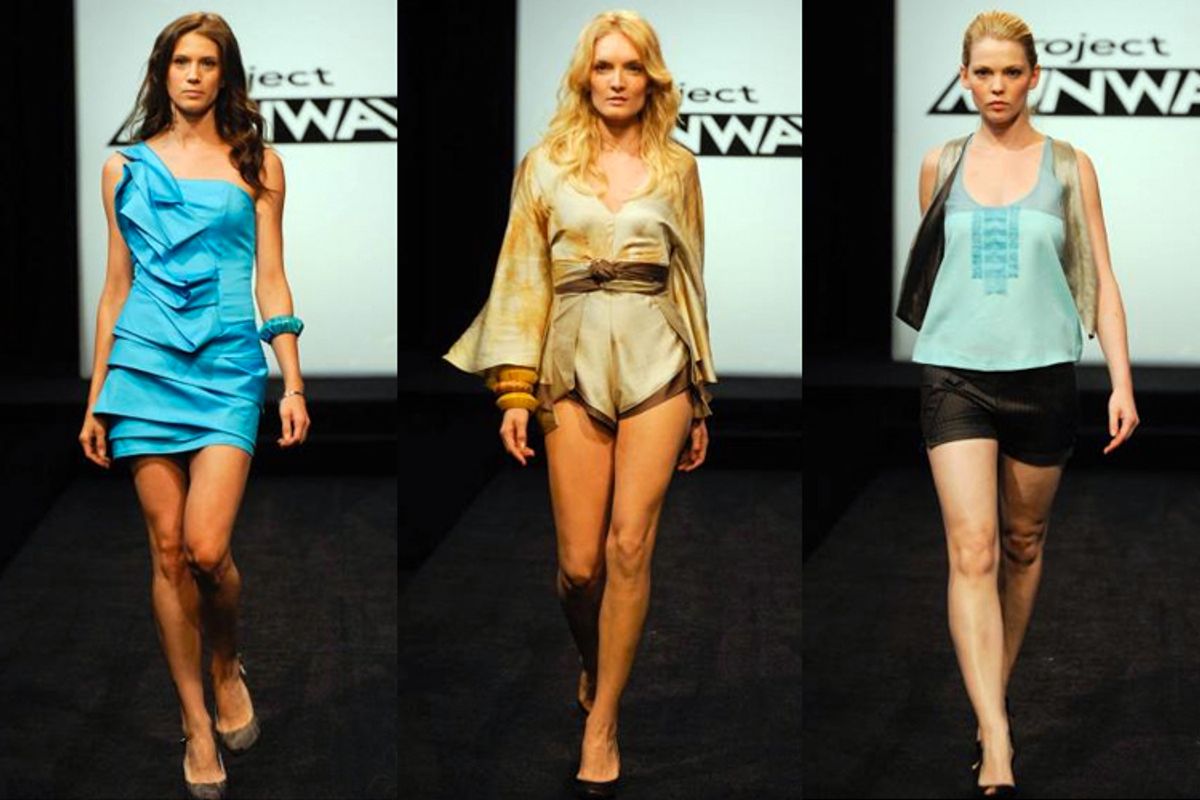 This week our designers face THE BIGGEST CHALLENGE IN "PROJECT RUNWAY" HISTORY. Oh my goodness. What is it? Design a dress for Michelle Obama to wear? Many a fashion career trajectory has been skyrocketed by Mrs. O, right, Jason Wu? No. It is designing a dress for Heidi Klum. Oh. For her to wear on the cover of Marie Claire magazine, which yes, is a sponsor of the show. Oh.

This is a case of infinite-loop shameless plugging, with all roads leading to "Project Runway." The designers create a look for Heidi, who is the host and a producer of the show. This design will then be worn on the cover of the magazine that sponsors the show. Repeat until the show moves to PBS.

Joanna Coles, the stern English matriarch and editor in chief of Marie Claire, gives the designers some details to consider when designing a dress to be used on the cover of a magazine. She cautions against using black or any patterned fabric, because it will detract  from the print that needs to appear there. She advises that they focus on the top half of the dress and make it eye-catching; it needs to stand out in a veritable sea of newsprint. Someone throws out the statistic that a consumer chooses a magazine on a newstand within three seconds. So it has to pack a visual wallop.

I am excited by this challenge simply because it is about the fashion. No design gimmicks. No weird materials. But will I be bored silly? Nope, thanks to Mila and the newfound hatred that everyone has for her.

This week Mila is pretty convinced that everyone hates her guts because of how talented she is, and she is quite miffed that no one congratulated her on her second place win last week. She goes on to say that she has absolutely no viable competition based on the pure crap that everyone is working on this week (I am paraphrasing a bit).  Mila then proceeds to run frenetically through Mood fabrics and takes a fall, which I'm sure elicited a few giggles from her fellow designers.

Cutting and sewing and ombre-ing begin in the workroom.  Seth Aaron is singing and making odd noises for reasons that only he knows. Anthony inquires about the type of cigarettes Seth Aaron may have been smoking. Janeane questions her own judgment and wonders if her dress is too bridal. If you have to ask ...

Anna is going to make shorts and something that is turquoise. This is like watching a horror movie when the hapless heroine decides to check the basement because she hears a loud noise. Don't go down there! You will be hacked to pieces! And on "Project Runway," the hacker is usually Nina Garcia. When Tim comes to visit, he looks at her pieces distastefully (let's be frank) and says, "Do you feel this look is you?"

Ben is doing something with metallic leather, and Anthony has a big poofy hunk of aqua satiny fabric. Mila is color-blocking three fabrics that are so neutral they almost disappear. Emilio is making a corset out of ribbons.

The designers return to their apartments for the evening, and Anna, in a moment of clarity, predicts that she and Janeane may have missed the mark this week. Mila is still certain that her design is exquisite.

Here are the runway highlights:

The top three designers are Ben (who designed a colorful Star Trek-meets-Madame Butterfly modern dress), Anthony, and Emilio. However, the judges have to first snip off the twee shoulder bows before they are happy with his lingerie dress. The bottom three are Anna, Janeane and Mila. The schadenfreude in the room is palpable.

The judges are harsh with the bottom three this week. Anna's outfit is pronounced "nausea inducing"  and dreadful by Joanna. Janeane, whose inspiration is the ocean, is told her dress looks like a polluted sea full of plastic bottles. Mila's is called an ace bandage, is likened to the color of hospital food and is disparaged for having crotch arrows.

In the feel-good moment of the show, Michael proclaims to Anthony,"The costume drama is over!" He is the winner. He acts like Miss Georgia winning the title.

Not surprisingly, Anna is the designer sent home this week. Janeane proceeds to cry.

This episode was a satisfying one, and the fashion was much more legitimate than in weeks past. But all good things must come to an end. The preview for next week shows the contestants designing for children. Sigh. I would like to point out that last week I noted that adding small, cute children to a show usually leads to its demise.