"The Wolfman": Creature feature with an identity crisis

This horror film isn't cheap or classy enough, despite the efforts of Anthony Hopkins in his fur-trimmed bathrobe 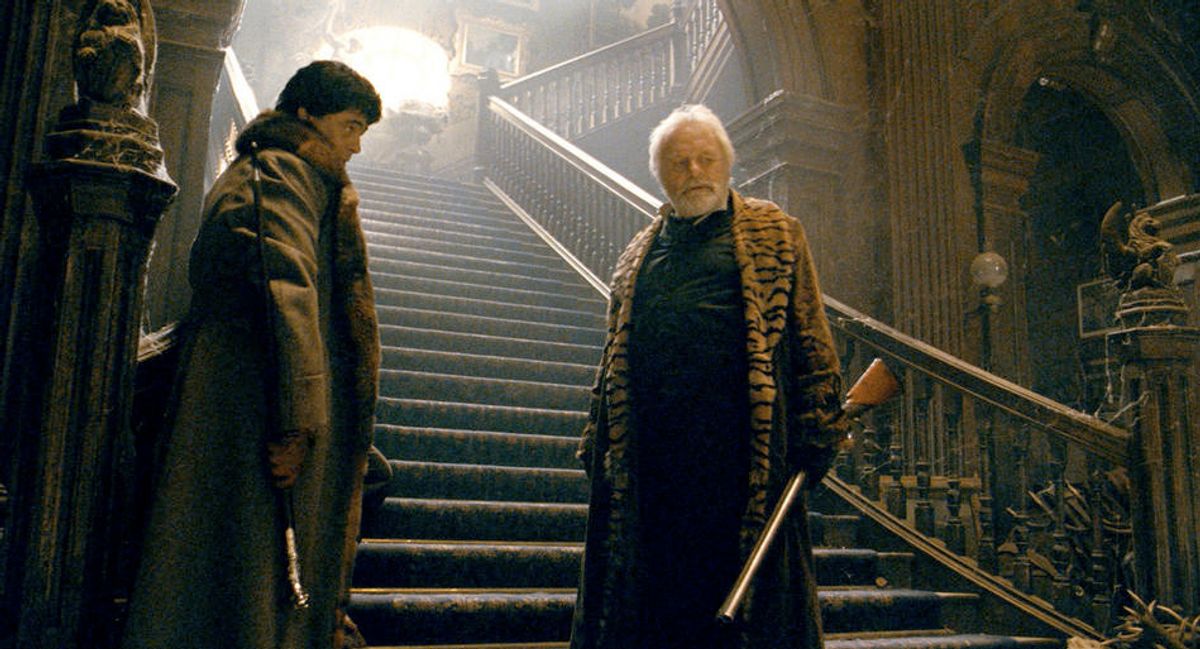 Benicio Del Toro and Anthony Hopkins in "The Wolfman."
--

"The Wolfman," like its poor furry protagonist, suffers from an identity crisis: It doesn't know whether it wants to be dark and moodily glamorous or ridiculous and gory -- it's a creature feature suffering from extreme class consciousness. Everything from the picture's milky-gray depiction of the English countryside circa 1891 (the director of photography is Shelly Johnson) to its assertive, sweeping symphonic score (courtesy of Danny Elfman) suggests that this is one swanky enterprise; the fact that master thespian Anthony Hopkins, wearing a tiger-fur-trimmed bathrobe, no less, has a sizable role ups the Masterpiece Theatre quotient even further. But when an unshaven, sozzled pub denizen describes, in a thick something-or-other accent, a typical scene of the werewolf-induced carnage he's seen around the village -- all "brains and gootz and God knows wot" -- we know it's not long before "The Wolfman" will drop its grandiose pretensions. Soon we'll be seeing entrails spilling out of stomach cavities and nasty brown claws piercing sternums willy-nilly. "The Wolfman" tries hard to show it has class, even as it works overtime to win over the cheap seats.

But a little more cheapness, or at least a little more bloody passion, wouldn't have hurt. "The Wolfman" was directed by Joe Johnston ("The Rocketeer," "Jumanji," "Hidalgo"); the script is by Andrew Kevin Walker and David Self, and it follows the gist of the screenplay Curt Siodmak wrote for the well-loved 1941 film of the same name. Benicio Del Toro is Lawrence Talbot, an emotionally fragile actor who returns home to his father's spooky estate after hearing about the sudden and brutal death of his brother. Crotchety old pops Talbot, aka Sir John (Hopkins), who doesn't seem to care much about either his dead son or his living one, has really let the place go to seed. It's one of those dank country houses where the outdoors have gradually crept indoors: Dried leaves litter the floor, and an ill wind blows through its various hallways and chambers. Returning home reminds poor Lawrence how much he misses his mother, who died, violently, when he was just a lad, apparently by her own hand. But it also gives him a chance to meet his dead brother's comely fiancée, Gwen (Emily Blunt), who adds a note of cheer to the glum estate in her richly embroidered Victorian dressing gown.

But Lawrence doesn't get much time to grieve. As he begins pondering the origin of a strange medal found on his brother's corpse, he finds his way to a caravan of gypsies (presided over by Geraldine Chaplin as a wise and wizened granny), and not long after that he's laid low by a bite from an unseen -- or perhaps half-glimpsed -- wolf assailant.

Johnston understands enough about horror to know that it's what you don't see that's scariest. And so the movie's early shots of men being shredded by someone, or something's, unseen claws come at us in quick jolts -- they're over before we can quite register what we've seen. But Johnston also knows that in this day and age, he can't send an audience home without offering them lots of glitzy CGI. And so we get to watch more than one werewolf transformation at close range: Before our eyes, a once-normal hand curls into a knobby paw with curly yellowed claws that look like old-men's toenails; a regular human nose flattens and broadens, and ordinary incisors lengthen into pointy fangs; hair sprouts every which way, and from everywhere, as if the gods of puberty had gleefully found a way to repeat and exaggerate their cruel joke every full moon.

But so much of "The Wolfman" is just silly. In theory Del Toro, with those lovely, eternally bummed-out greenish eyes of his, has the perfect face for playing a tortured and cursed soul. But here he's forced to wear a dorky hairdo, complete with unflattering Caesar bangs; he just looks puffy and unhappy rather than bestial and brooding. Hopkins, with his portly tummy and pointy white beard, conjures the spirit of the "We will sell no wine before its time"-era Orson Welles. He works hard at being rotten -- too hard -- and appears to relish showing off his character's grim, demented smile, a row of blackish teeth.

I confess I kind of liked the evil insane-asylum doctor (played by Michael Cronin) who shows up wearing a blood-smeared rubber apron: He at least attempts to give the movie a gloss of high camp. But "The Wolfman" isn't crazy enough to be fun or multilayered enough to be touching. It's impossible to have any real feeling for this anguished beastie. What little soul "The Wolfman" has is channeled through Emily Blunt's understated, self-possessed performance. At one point Johnston shows her riding through a moonlit landscape on a white horse, a dreamy fairy-tale image that's worthy of Blunt's half-earthbound, half-ethereal glamour. In "The Wolfman," Blunt is the beauty who soothes the savage beast -- or at least makes you feel that you haven't completely wasted the last two hours of your life.