The Web is glutted with hearts and flowers right now, but we're here to help you sort through it 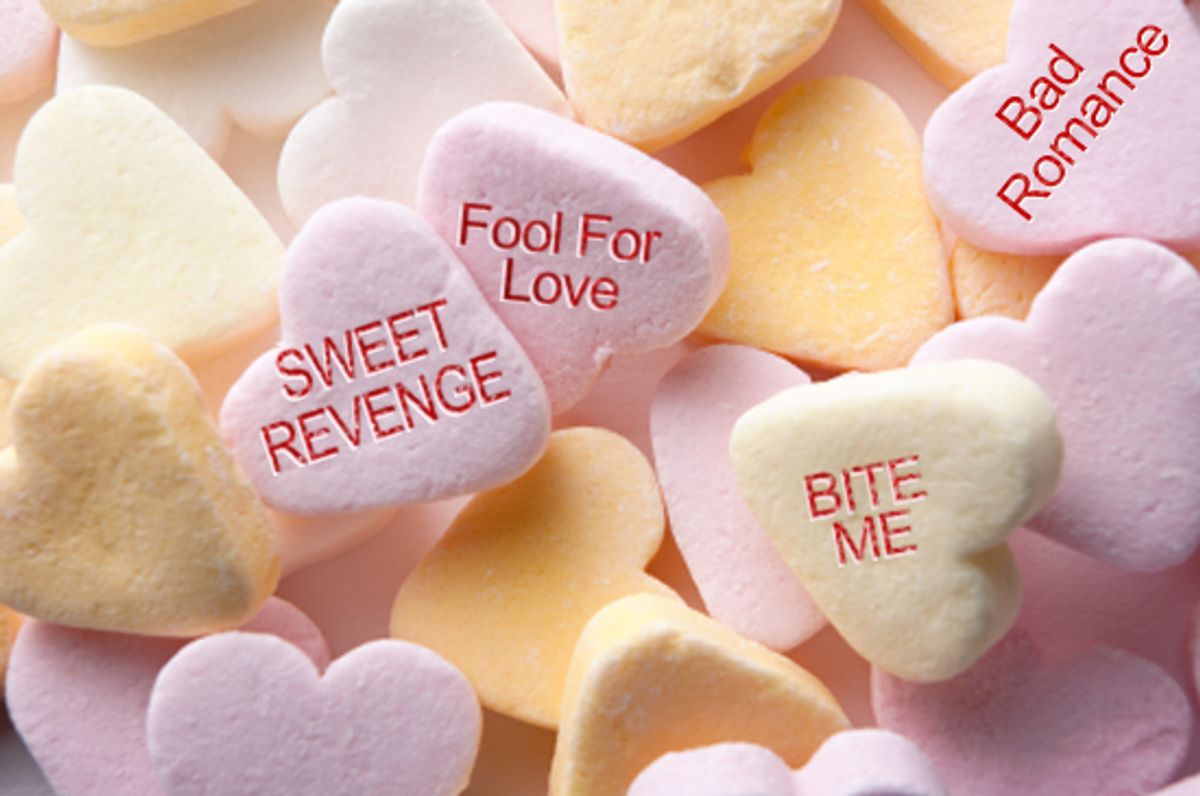 For cynics and singles: AntiVDay.com has a forum for discussing why this holiday sucks; Despair, Inc. will sell you conversation hearts that say things like "dog is cuter," "celib8 thx2u" and "p.s. i luv me"; Dr. Jennifer Baumgartner offers tips on being your own Valentine aimed at adolescent girls, but not bad for grown-ups, either; and you can find lists of anti-Valentine's day movies to get you through the weekend at The California Literary Review, Rotten Tomatoes and Zap2It.

For those who actually like Valentine's Day, History.com will keep you busy with videos about Saint Valentine and how chocolate is made, presidential love letters, a survey of notable romantics, and games like "Dating through the Ages," which tests your knowledge of romantic etiquette over the last 120 years. Could come in handy if you ever find yourself looking for a date in 1897.

Everyone complains about how Valentine's Day is nothing but a holiday invented to sell flowers, chocolate and romantic angst, but a look at the numbers is still sobering. According to the National Retail Federation, "U.S. consumers spend an average of $14 billion on Valentine's Day." The run-up to February 14 accounts for a fifth of all flowers sold during the year and about one-third of the over $900 million spent on chocolate. The average individual expenditure is $103 -- and despite all the stale jokes about their romantic memory lapses, men spend a lot more than women. Oof.

The Pitch's "Studies in Crap" offers a handy guide to Harlequin romance heroes ("his eyes are 'deep gray with just a hint of duck-egg blue' and 'blazed with an internal fire women longed to feel scorch them'"), along with a brief interlude involving Beatles slash fiction. Really

There's still time to submit a Valentine-themed haiku to Breakup Girl's (a.k.a. Salon contributor Lynn Harris') contest! If you think you can top past winner Brian Thomas' "Am I over her?/ Why, did she ask about me?/ Hey wait, come back here!" you've got until midnight EST to contribute.

At the behest of Public Radio International's Studio 360, husband-and-wife design team Armin Vit and Bryony Gomez-Palacio took a stab at rebranding Valentine's Day, replacing the tired heart icon with a footed wishbone, choosing a more sophisticated color palette, and offering three options for a Cupid substitute: A puppy, a worm, and an authoritative white dude. (Vote puppy!) If you haven't bought your sweetie a card yet, you can download the new icon and make your own.

Finally, if you were considering seeing the new all-star romantic comedy "Valentine's Day" this weekend, Jezebel's Lindsay -- who admits to eagerly seeing "He's Just Not That Into You," sincerely enjoying "The Proposal" and owning "Love Actually" on DVD, so you know she's not messing around -- would like to strongly (and hilariously) caution you not to:

Is part of you still holding on to the classic poorly-reviewed-movie rationalizations like: "But it's cold outside, and maybe it's so bad it's good! Or maybe people will be talking about it and I won't know what they're talking about! Or maybe it will do what movies are supposed to do and give me a few moments of distraction from the stress of daily life and the depressing world in which we live"? If so: I promise you, no, no, and no. If you want to replicate the experience of seeing this movie, book a crowded four-hour (because it feels twice as long as it is) coach flight with no ipod, no reading material, not even SkyMall or the in-flight magazine, and just stare at the back of the seat the whole time while your legs cramp. You will be replicating theValentine's Day experience exactly. Fine, you can have some popcorn, but that's it.

If you're still not convinced, you can watch the trailer (which made Lindsay's "spine hurt with its transparent pandering to the stereotype of the lonely single woman") below.

If you're celebrating, Happy Valentine's Day!If you're not, at least there are only two more days before all this stuff dies down for another year.