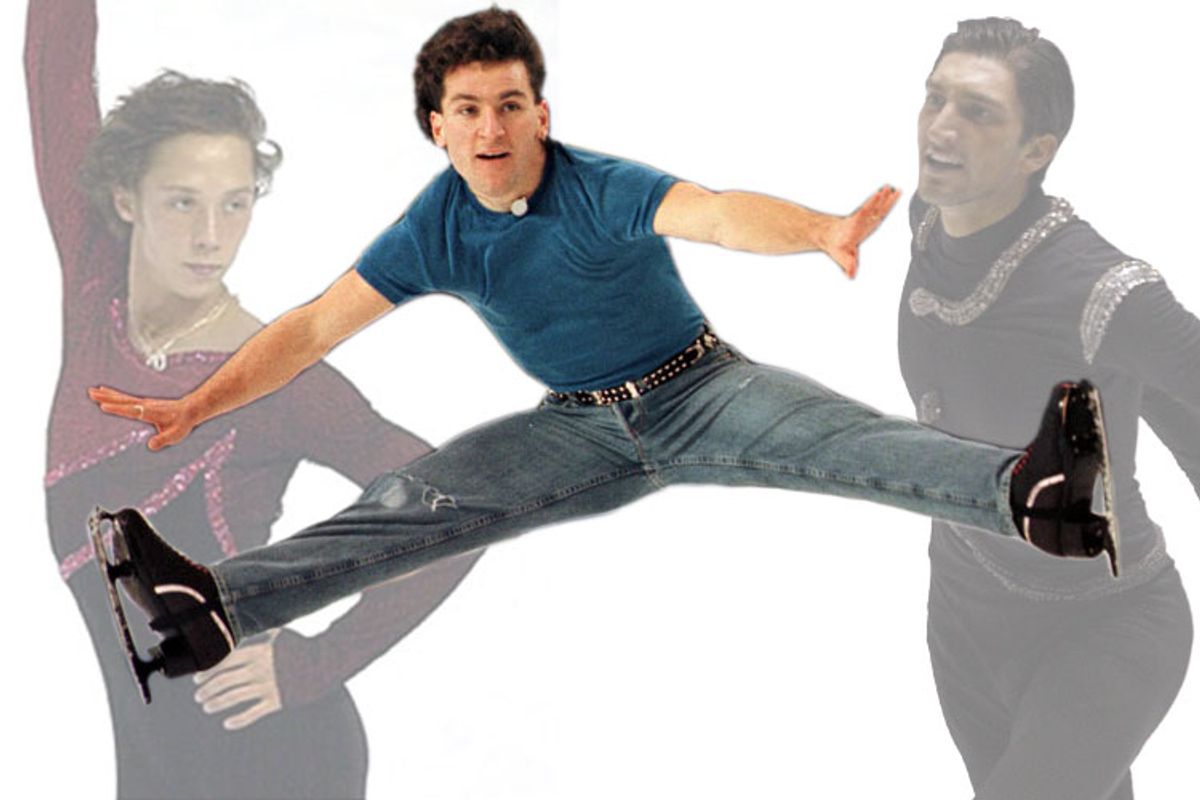 Men's figure skating has never been the manliest of sports. Routines are punctuated by dramatic hand motions, the costumes often look like they've escaped from a very gay zoo, and currently, its best-known figure is a man who wears a giant fur hat and hangs out with Lady Gaga.

But some members of the skating community believe the sport's effeminate image is increasingly a problem. Last year, Skate Canada told athletes and officials to talk up the sport's toughness in order to attract more of a "hockey crowd," and three-time world champion Elvis Stojko, the first man to land a quadruple-triple combination jump in competition (in 1997) and a skater known for his butch style, has spoken out on the issue. The sport really needs to start emphasizing "masculinity, strength and power," Stojko has argued, if it wants to be taken more seriously. His remarks infuriated some gay groups, who perceived them as a slap in the face to the sport's traditional fans.

Stojko (who is doing Olympic analysis for Yahoo) spoke to Salon over the phone from Mexico, where he now lives, about "Blades of Glory," why the gay community needs to get over itself, and if it's really possible to get NASCAR fans to watch men's figure skating. The Olympic men's competition begins Tuesday.

There’s been a lot of discussion about masculinity and figure skating recently. Do you think the discussion has been productive?

It basically started about one year ago, when Skate Canada said that they weren't getting enough young boys enrolling in skating. People tiptoe around the topic, and I was like, "You know, I'm just going to say it: Effeminate men's skating is not my style of skating. In men’s skating I like to see power and strength."

Why do you think it's become so difficult to recruit young male skaters?

Some guys get into the sport because it's difficult — the spins, the speed — and they like to showcase that within the music. When you're not appreciated for that, it takes its toll. And then when people call them effeminate, they get pissed. People call them gay, and some people don’t like to be called that.

It's not the skaters' fault. It's the way the system has been rewarding them. You have to have a program that’s dynamic. If it's the same from beginning to end, and it's soft and doesn’t have dynamic strength and power and quickness, the routines become very much the same, and it becomes very boring.

Skating can’t just be one thing. It's got to have something for everybody. There have been so many different personalities, from the Kurt Brownings to Rudy Galindo, who was completely the opposite. There was a very classical style to Todd Eldridge. Now it's starting to become very much the same.

Hasn't the new judging system, which was instituted after the 2002 Olympic figure skating scandal, helped?

Sort of. Some people say it leans toward the technical only because they break it down in a very technical way. The system itself I’m not a huge fan of. The quad jumps don't get enough credit. You can't carry speed through a footwork section, because you’re trying to do so many combinations of things. It limits the skater.

They implemented this five years ago, and now they're seeing a drop in young male skaters. It also alienates the audience, because people got used to the 6.0 score. Now it's just a number. For a lot of people it’s like trying to decipher a code.

Do you really think, though, that figure skating can attract the NASCAR fan?

If you want to open up figure skating to another audience, you need to create something that's going to allow everyone to watch. If you have a male masculine person watching it, they need something to relate to. Other guys relate to Johnny Weir’s thing. You need to have guys doing jumps, so a person who also watches NASCAR can identify with it and say, "Hey that's awesome — how many rotations is that?" or "How fast did he spin?" instead of, "How pretty was that guy?"

I think the reason some people get offended is because calling a man "effeminate" is usually code for "gay."

People in the gay community have to realize they’ve got to take themselves out of it. It's not against anybody. I've been getting heat for this, but there are people behind me saying that they appreciate it. It's about what people can identify with when they're watching the sport. It doesn’t have anything to do with gayness. Effeminate men can identify with effeminate skating. Masculine men can't identify with that. When I watch it, I can't identify because I don't move like that. My consciousness doesn't feel like that.

What is feminine and what is masculine skating?

It's the way you carry yourself. There’s a certain strength to it when a masculine skater steps onto the ice and attacks a program. With the feminine skaters, the use of the hands becomes very soft, down to the fingertips. There's a lot of little details, but essentially you can pick up on it in the first few movements.

It has a lot to do with choreography. A lot of the choreographers out there, the male ones, are very effeminate. The skater ends up picking up that style. As a male skater I don't want to be considered a beautiful skater. I want to be a strong skater.

American Evan Lysacek is being promoted as a more macho skater. Do you think he is an heir to your kind of masculine skating?

I don't think so. I think he is more masculine than Weir, but there is a power and rawness and organic-ness to his skating that's missing. At the beginning of his career, it was there. If you try to refine something too much, you lose its organic essence, and you refine and refine, and it becomes boring. It becomes something that's more of the choreographer’s point of view rather than the skater's point of view. Obviously his skating looks stronger than Johnny Weir's, but he’s missing the aggressive punch of someone like Brian Joubert.

I take my hat off to him, because it's hard for a tall skater to be as consistent as he is. His impact is his size and the use of his arms, but there's a lot of flailing going on. Sometimes it becomes nondescript. Evan's skating is stronger than Johnny’s, but in my opinion it's not strong enough.

What do you think of Johnny Weir?

Johnny is one of these skaters who is obviously unique. He has his own sense of style, and doesn’t care what anybody thinks, and he's not always trying to impress. He's like, "I don’t care if you like it or not, just watch me." He’s not my style of skating, but he’s a talented skater — otherwise he wouldn’t have been on the podium at world’s. Everyone is putting focus on Johnny, of course, because he stands out.

Weir has a film out, and now a TV show. In a sense he’s as much a media personality as a skater. What do you make of that?

I think it is going in that direction. Going your own direction and being outlandish with a lot of things can create media attention, and the media latches on to something that steps out of the norm. It is definitely new to have a skater have his own show.

Do you think it's unfair that you didn't get that kind of attention when you were skating?

God, no. When I was competing, at the height of my career, we didn't have YouTube. I carved out my own niche. To say it's unfair, that's kind of small. The thing that impresses me about Weir is that he doesn't care what people think. I'm the same way in that direction. I say what I feel. You can take it or leave it. With Johnny, he's doing the same thing in this other direction. I can appreciate his whole motto, that he just doesn't care.

"Blades of Glory" painted the sport as a hyper-effeminate joke. Do you think the film’s mocking take is the result of the sport’s feminization?

Absolutely. There's truth behind it, but they take it to a whole other level. Some people got offended by it. Men's skating is a very small world, and there are diehard fans that watch it. They get very, very touchy. As a skater you're used to it. As a kid, you've got to make sure something like that doesn't get into your consciousness. I thought it was hysterical, because that is what the rest of the world sees skating. If the sport of skating wants to be taken seriously, it needs to change.

There’s been a persistent inaccurate rumor that you’ve gotten into a fight with Eric Lindros. Why does that rumor have such a long shelf life?

It's funny because that rumor was 15 years ago and continues to go on. There was one story that he was picking up these girls, and I stepped in. Or he was being rude to people, but it all ended up with me beating the crap out of him.

Did you ever get teased for being a figure skater?

I was picked on in school. People called me twinkle toes. It got annoying because that's not me. Later on in life, you're just like, "I know who I am, and I don't care what people think."

I've been called everything under the sun. Everything from being told that I'm only a jumper, there's no artistic bone in my body, that I'm hideously ugly, that I look like a hockey puck. It got to the point where they said I'd gotten too masculine, and I was like, "What? I'm a guy!"