Mainstream journalists repeat Bayh's complaint about extremists on both sides. But they (and he) know it is a lie 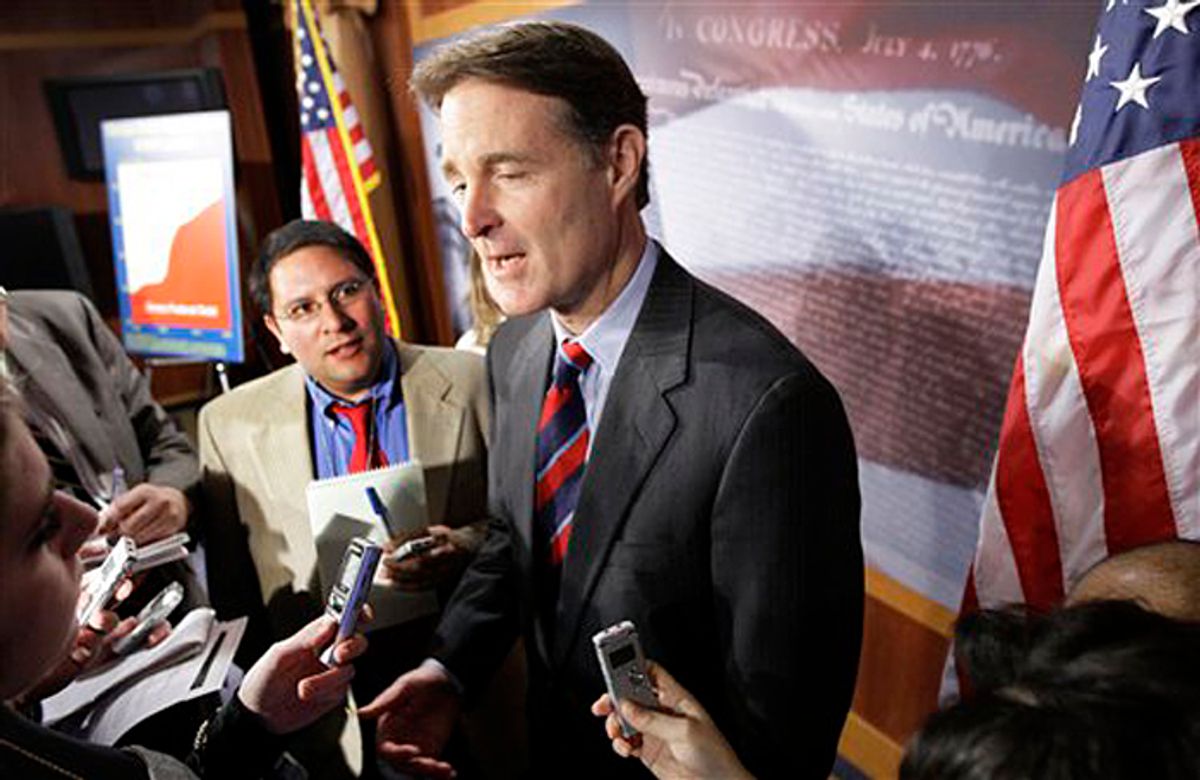 The consensus of the Washington press corps, following the abdication of Sen. Evan Bayh, D-Ind., displayed the unreality of "objective" reporting -- and showed again that the fruits of bipartisanship are bitter. Nearly every mainstream news story or analysis echoed Bayh's claim that he valiantly represented the sensible center in a capital where the "extremes" dominate both parties, preventing needed compromise and frustrating his profound urge to "help people." In other words, the far-left Democrats and the far-right Republicans, marching lockstep against the middle, are the enemies of progress, decency and the American way.

But is it true, as Bayh suggested, that Senate Democrats have rejected the counsel of moderates and centrists with the same partisan ferocity as the Republicans? No, it is blatantly false --and journalists who have observed the politics of the Obama administration's first year ought to have realized that instantly -- and said so.

Consider only the single most salient issue: Did the "strident ideology" of the left dominate the crafting of the Senate healthcare reform? Not unless Sen. Max Baucus, Bayh's fellow centrist and friend of insurance lobbyists everywhere, is now to be considered a socialist. The White House legislative operation, overseen by Rahm Emanuel, a deep-dyed blue dog and Bayh's kindred spirit on the Democratic Leadership Council, entrusted the president's healthcare promises to Baucus. As a result the public option was duly jettisoned, with the collaboration of every liberal and progressive in the Senate, down to the only actual socialist, Vermont's Bernie Sanders. If that alone was not sufficiently "pragmatic," the Democratic leadership then sold out to conservatives on reproductive rights, solely to ensure that Sen. Ben Nelson and Rep. Bart Stupak would be happy. The entire healthcare reform effort by Democrats in both houses was shaped by the imperative of placating moderates, conservatives and any Republican who might sign on (although none did).

Bayh knows all of this recent history, doesn't he?  He also knows that the president has struck a middle course in national security policy, outraging many on the left by expanding the American military commitment in Afghanistan -- and winning the support of the Democratic congressional leadership for that "moderate" decision as well.

"The extremes of both parties have to be willing to accept compromises," Bayh said. "Some progress is better than none." But even while he uttered these Beltway bromides, he knew that his party's progressives in the Senate have accepted every half-step and every accommodation supposedly required to reach consensus -- or simply to avoid a filibuster. He knows, too, that the reason those concessions have failed to achieve the "practical progress" he claims to desire is because the Republicans decided to oppose any and all Democratic legislative initiatives, no matter how compromised, because their strategy is to discredit Obama and the congressional majority at any cost.

To his lasting disgrace, Bayh is departing elected office as a witting accomplice of that strategy. Meanwhile, the central irony is that the more Democrats compromise, the more they are victims of the deadlock imposed by the Republicans. The lesson of these grim experiences is not to continue courting a bipartisan consensus that doesn't exist. The definition of insanity, as the last Democratic president liked to say, is to keep doing the same thing and expecting a different result.