Kevin Smith: The face of flying while fat 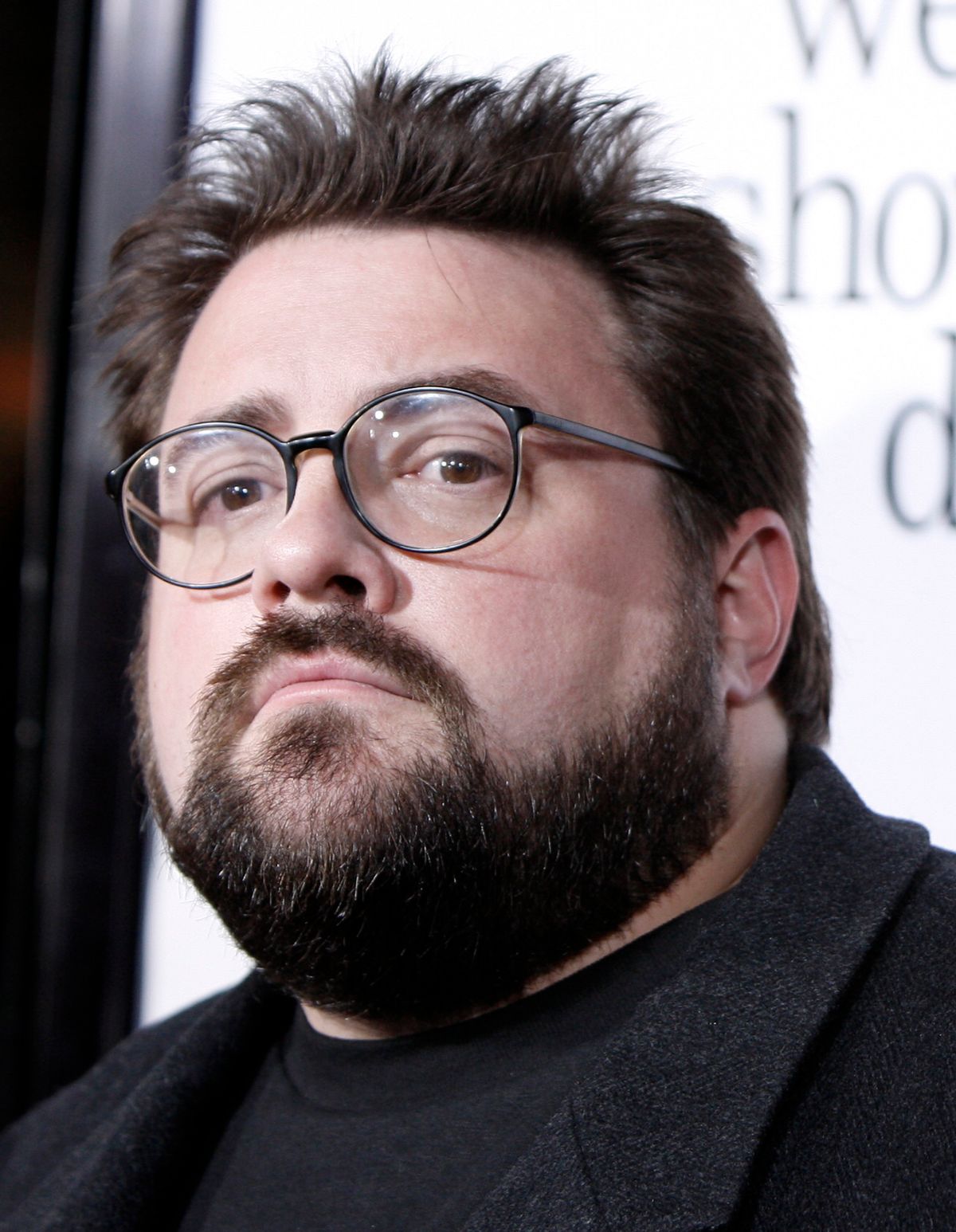 Whenever the issue of whether larger people should be forced to buy two airline seats comes up -- as it did this weekend, when director Kevin Smith was booted from a Southwest Airlines flight, and as it did last April, after United introduced a policy practically identical to Southwest's -- the first and only thing a lot of folks think of is that time they had to sit next to a fat person on a flight, and it was so uncomfortable.

Perhaps they even had the special misfortune of sitting next to a rude fat person, the kind who doesn't even seem contrite about infringing on someone else's severely restricted personal space -- a portly cousin to The Armrest Hog, The Seat-Kicking Kid or Reclines Right Into Your Lap Guy.  There's no shortage of rude people of all sizes, but it seems like everyone's got a story about that whale who made a two-hour or three-hour or even five-hour flight pure hell for the adjacent paying customers. (The fact that airlines try to keep costs down by packing passengers in like sardines and routinely overbooking flights has nothing to do with it, evidently.) And most of those people think charging larger customers double to make everyone a little less miserable is a perfectly reasonable solution.

Which is why part of me is glad the Kevin Smith debacle happened -- though I'm terribly sorry he had to go through it -- because it put a recognizable face on the experience of flying while fat. See, those of us who are and/or love people to whom airlines' "person of size policies" apply don't automatically envision the discomfort of getting stuck next to a fatty; we envision the physical and emotional pain of being the fatty crammed between two potentially hostile strangers, at the mercy of flight attendants who might decide we're fine on one flight and a "safety risk" on the next. As a commenter at my body image blog put it (I might have deleted an expletive or two):

[T]his one really means something to me... he's talked about it being humiliating. This specific language really personalizes it, makes it concrete. It's not just an inconvenience or bad business. It's personal and it's HUMILIATING and it's important to name that and not shy away from it."

Here's the first thing I think of when this issue comes up, for instance: The weekend my mom was dying. Two of my siblings and I got to her bedside within hours of getting the call that she'd had a massive heart attack. Our other sister took two days to get there. She could fly coach, technically, with a seatbelt extender and the armrests digging into her sides. But she couldn't afford two seats, especially on such short notice, and knew she might be forced to buy another if the airline decided she was too big to count as a single human being. She knew she might be bumped from the flight she'd paid for, and forced to wait around for one that was less full, for who knows how long, while our mother's organs were shutting down in another country. And she knew that even if she was allowed to fly on the flight she'd booked, there was every chance she'd end up sitting next to someone who would spend the whole time sighing heavily and throwing her dirty looks -- then probably spend the rest of her life telling the story of being next to that awful fat woman on a flight from Boston to Toronto, that disgusting creature who just booked a single seat without a thought to the people who would have to brush up against her monstrous bulk for a couple of hours, like she had to be somewhere so important it was worth inconveniencing strangers.

So, rather than deal with any of that, my sister chose to drive a thousand miles as fast as she could, hoping she'd get there in time. While she was on the road, the doctors informed us that there was nothing else they could do, so the whole family's focus shifted from wondering whether Mom would make it to wondering whether my sister would. A nurse reassured us that Mom would hold on long enough ("They always wait for their babies") and as it turned out, she did. Just. But that agonizing day of asking my mother to please hang on a little longer -- while she was wracked with pain beyond the reach of morphine, moaning like a wounded animal when awake enough to communicate at all --  is the first thing I always think of when the debate about whether fat people deserve affordable air travel comes up. You think of some lumbering beast who had the gall to "steal" an inch of your seat that one time. I think of a dying woman waiting for the last of her babies to say goodbye.

I also think of my tall, 300-pound friend who flies a lot for business, and is terrified that one day she'll suffer Smith's fate, then have to call her boss and say, "Yeah, I won't be able to make the meeting you were sending me to, and I might need to expense the cost of a second ticket, and if we want to make sure this never happens again, you'll have to pay twice what it would cost to send a thin person up front." And I think about the fact that she doesn't live in any of the few cities or one state in the entire country that prohibit discrimination based on body size. And I wonder, like she does, how long it would be before she lost her job to someone who fits better in a coach seat.

I think of the non-famous people who have been thrown off flights for making thin people uncomfortable -- the brother and sister on their way home from their mom's memorial service, the man who didn't make it to a family funeral at all, the man living on disability who couldn't afford a second seat to meet with doctors about a liver transplant -- and all of the commenters at my blog who say, every time we talk about this, "I'm terrified to fly" or "I just don't fly." Not because they have anxiety disorders, or they were traumatized by "Lost," or because airplane terrorism has done its job on them -- because they're fat. And they can't afford two seats. And even if they're just small or lucky enough that they can probably avoid being escorted off the plane like a criminal, the risk of smaller-scale humiliations -- sitting next to someone who complains about their size; absorbing flight attendants' naked disdain; overhearing someone say "I hope I don't have to sit next to her"; being told, as Smith's seatmate on his later flight was, that they should really purchase two seats in the future to avoid making other people uncomfortable; plus the aforementioned dirty looks and heavy sighs -- is often enough to keep them at home. It's enough to make people say things like, "Maybe I don't really need to see my family this year" and "I won't bother applying for a job that requires travel" and "It's just easier to vacation close to home" and "If I start driving now, I think I'll get there in time to say goodbye."

I think of the people who tell me they've tried to "do the right thing" and book two seats, because they could afford it and wanted to avoid the hassle -- only to find that the airline's reservation system makes it nearly impossible and customer service representatives had no idea how to help them. I think of the ones who did manage to book two seats, then were forced to surrender one anyway, because the flight was overbooked -- they eventually got refunds, but not all the space they paid good money for, hoping to avoid as many of those smaller humiliations as possible.

I think of the thousand humiliations, small and large, most fat people have already endured in their lives -- the insults from family and "friends," the cow-calls on the street, the discrimination, the bullying, the news every day that their bodies constitute a horrifying crisis for the American public. I think of how dreadfully uncomfortable it is, physically and emotionally, to fly in a fat body that isn't bruised by the armrests and doesn't require a seatbelt extender, and how much worse it would be if I weighed significantly more, like some of my family members and dearest friends do. I think of how few people would be willing to raise the kind of fuss Kevin Smith has (let alone how few fat folks could get so many people to listen) because they would automatically be too ashamed of themselves if a flight attendant made a public spectacle of removing them from an aircraft.

And then I read Southwest's apology to Smith, which includes such gems as "If a Customer cannot comfortably lower the armrest and infringes on a portion of another seat, a Customer seated adjacent would be very uncomfortable and a timely exit from the aircraft in the event of an emergency might be compromised if we allow a cramped, restricted seating arrangement." And I think, first, "If we allowed a cramped, restricted seating arrangement? Because 'The Greyhound of the Skies' is positively roomy when there are no fat people on board?" And second, I think, "Translation: Fat paying customers' fully expected discomfort only becomes a problem for us if it also makes the paying customers we care about uncomfortable."

And then, against my better judgment, I read the comments sections on articles about this issue and see things like "Fat people should be imprisoned for over consumption. They've eaten more than their share! I'm glad I wasn't sitting next to this hog" and "I have travelled next to someone like, sweaty, panting, snoring, knocking drinks over at a sigh because the table was resting on him... Should have gone as cargo," and right here at Salon, "Fat people are disgusting. They should travel by ox cart or something. I mean really. Do they need to inflict their smelly fatness on everyone else?" (That person even finishes with a little straight-up eliminationist rhetoric for good measure.)

And I read comments from lots of people who are less openly hateful, but still think that fat people should buy two seats or lose weight or stay home -- not that the airline has any responsibility to, say, ensure that adequate seating is available for everyone or treat people of all sizes like equal (not to mention individual) human beings -- and you know what I think? Forgive me, but sometimes there's no other way to say it: Fuck you. That's what I think.