But Rep. Walter Jones still wants an independent investigation -- and the Pentagon has agreed to do it 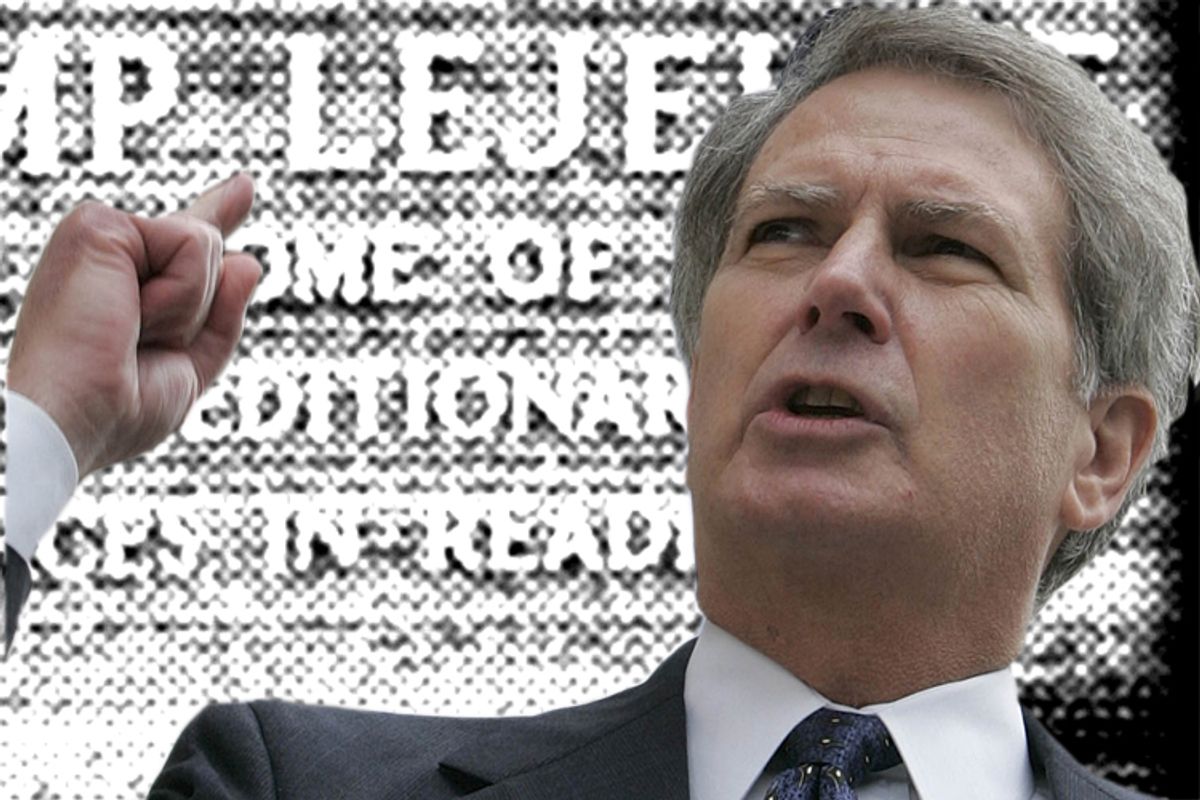 Rep. Walter Jones is rejecting new claims by the Navy that all is well with mental health care for Marines back from war at Camp Lejeune in North Carolina.

In an interview last week, the North Carolina Republican told Salon that his office is flooded by complaints about Marines receiving poorly managed mental health care. Many of the complaints echo those made public by Dr. Kernan Manion, before the psychiatrist was fired from Camp Lejeune. Marines say they face harassment or disciplinary action at Camp Lejeune when their underlying problems lead to troubling behavior, instead of getting the help they need.

“I’ve gotten new information,” Jones said about the reports coming in to his office. He described an "explosion" of suicides and violence among returning Marines. He said years of straining to maintain a fighting force while troops go through multiple combat deployments has contributed to the emergence of a toxic military culture of hostility and retribution. "We are breaking the military," Jones worried. He asked for an investigation into Manion’s termination -- and the Pentagon has committed to doing it.

The Navy admiral who oversees medical care at Camp Lejeune disagrees with complaints about care, based in part on a two-day visit to the base last week on the heels of a series of Salon articles. "I am very assured that the quality of mental health care that is available to the Marines and sailors at Naval Hospital Camp Lejeune is very high," Rear Adm. Bob Kiser, commander of Navy Medicine East, which oversees healthcare at Camp Lejeune, told Salon.

Kiser disputed accounts that the Navy smeared Manion for blowing the whistle, but admitted that during his trip he did not dig much into whether Navy officials altered Manion’s personnel records to make him look bad, as Salon reported.

Specifically, Kiser said he does not know if the Navy has backup documentation showing that Manion was, in fact, a bad doctor, as the Navy has alleged. "I don’t know because I don’t have a need to know," Kiser told Salon in a telephone interview. Kiser explained that privacy rules prohibited him from looking into that documentation. "I am not privy to the exact nature of those sorts of documents," he said.

Walter Jones says he will seek a second opinion on that as well.

The North Carolina Republican is hotly pursuing allegations of poor care and coverups at Camp Lejeune. Jones worries Manion might have been fired in retribution for blowing the whistle. Jones told Salon last week he is mostly motivated by Manion’s underlying concerns -- that Camp Lejeune is poorly responding to Marines coming back from war with psychological injuries from combat.

"I care about what has happened to Dr. Manion, especially if there has been a contrived effort to undermine him," Jones told Salon. More important, he said properly handling Marines returning from war with combat stress is "what I care about and Dr. Manion cares about."

This story is unfolding rapidly. Salon previously reported that Jones had requested an independent probe by the Defense Department inspector general -- kept out of the hands of the Navy entirely -- that would look into the experience of Marines returning from war at Camp Lejeune as well as allegations the Navy fired and then smeared Manion’s performance record.

Jones told Salon that’s not good enough. He said he would insist that the inspector general's investigation look into the smearing of Manion’s record, but more important, probe the experience of Marines returning from war with sometimes life-threatening mental injuries from combat. "I am not going to let this thing go," Jones pledged to Salon. "I am going to insist that there be a fresh look at this problem."

Jones agrees that the tale of Manion, complicated as it may be, is a vehicle to get to the heart of that bigger story about Marines. "We have got to get to the truth on this thing," he vowed.

Marines from Camp Lejeune also dismissed Kiser’s rosy portrayal, describing a much harsher reality. "It is a song and dance," a Marine Master Sgt. at Camp Lejeune said about Kiser’s comments. "I think this is lipstick on a pig. They have a nice building. They threw some money at this. Now they can say these guys are being taken care of."

That Marine, who requested anonymity, described significant stigma attached to mental health treatment at Camp Lejeune, including harassment from fellow Marines and superiors. "It is a career ender," he said about seeking help. "They will tell you it is not. But it is." He had been a patient of Manion’s, but after Manion’s termination, he said, he was shuffled off to another healthcare provider without even an explanation of where his doctor went. "Dr. Manion is amazing. I will just say that," he said. "To see his name dragged through the mud is, well, that is the kind of shit that the military is famous for and that is why I want to stay anonymous."

The Marine was referring to Manion’s termination and what came next, which is the back story to this whole affair.

Manion, a psychiatrist with 25 years of experience who specializes in the treatment of combat stress and concussions, was fired last Sept. 3. Manion had repeatedly warned his superiors at Camp Lejeune, including Cmdr. Robert O'Byrne, head of mental health at the Camp Lejeune Naval Hospital, that poorly managed mental health care could contribute to an already worrisome rash of deadly violence among returning Marines. Frustrated by what he said was an inadequate response from his superiors, Manion warned a series of military inspectors general on Aug. 30 about the "immediate threat of loss of life and/or harm to service members’ selves or others."

Manion was fired four days later. Salon wrote about the whole episode on Nov. 15, suggesting Manion’s termination may have been retribution for blowing the whistle. The contractor who employed Manion told Salon the psychiatrist was terminated at the Navy’s request.

Jones, who says he's bent on getting to the bottom of all this, asked Defense Secretary Robert Gates about the situation the very next day, in a letter dated Nov. 16. On Dec. 17 Navy Secretary Ray Mabus responded to Jones. Far from silencing a whistle-blower, Mabus said, the Navy had terminated a bad doctor who deserved to go. Mabus alleged that Manion had been "counseled on multiple occasions" for being unprofessional, absent and disrespectful, among other things.

Mabus' allegations track closely to what appears to be a doctored performance evaluation of Manion's time contracting with the Navy. After his termination, one of Manion’s peers had filled out Manion’s exit evaluation, giving him high marks. Salon obtained internal e-mails and documents showing that on Nov. 24, just days after the original Salon article, Camp Lejeune mental health chief O'Byrne "pulled back" that performance, according to an e-mail from O’Byrne to that peer.

O’Byrne then returned the review with new derogatory information in it, panning Manion’s professional judgment, ethical conduct and ability to work with peers, similar to some of the negative information that Mabus would later reiterate in his letter to Jones. Salon published an article exposing that paper trail on Jan. 31

Kiser, however, said Salon's article about Manion’s evaluation reflected only a snapshot of the collaborative process of drafting a performance review, which is based on input from multiple healthcare officials. "The whole allegation that there was some alteration done reflects a misunderstanding of the performance evaluation process," he said. "What happened, I suspect, is that there are several copies with several inputs, but nothing has been altered," he explained. "The final (review) is not anything that you have shown on your website."

In fact, Kiser said, there is yet another version -- the official final evaluation -- of Manion’s performance review that was completed just within the last few days.

Manion received that review Monday, Feb. 15. It is dated Feb. 11, two days after Kiser’s visit to Camp Lejeune and over five months after Manion left the base.

This version of Manion’s review rates Manion’s "ability to work with peers and support staff" as unsatisfactory. A paragraph is attached that alleges Manion "openly argued with staff." It also alleges that Manion was counseled multiple times for poor use of the chain of command, but did not improve. It notes, however, that this counseling was "informal."

That could be a key word. In addition to the tangled story of Manion’s evaluation, a potentially larger bombshell still lingers: Navy Secretary Mabus’ Dec. 17 letter to Jones, saying that Manion was such a bad doctor, he had been "counseled on multiple occasions" but failed to improve.

Manion says he was never counseled or reprimanded by the Navy during his time as a contractor. And it's well known that such counseling in the military generates a lengthy paper trail. Salon asked Kiser if he is confident this paper trail exists. That is when Kiser responded that he does not know because he does not need to know.

Where is that paper trail? A doctor who formerly served at Camp Lejeune said the "informal" counseling in this latest review is a dodge, because it means there is no paper trail. "As far as this informal counseling -- my training has always been you document everything, you have them sign it and you put it in the record," he said. "The Navy needs to come clean. They need to say, 'Look, we screwed up.'"

Without going into specifics, Kiser responded that he was confident that the process was perfectly fair. "One can, I think, take some comfort in that the process is fair and objective," Kiser insisted. He said everything in Manion's final review would be "quantifiable, substantive and objective."

Not surprisingly, now that Manion has the final review, he disagrees. "I'm truly hoping that Congressman Jones is able to get a new DOD inspector general investigation," the psychiatrist says, "so that we can get to the heart of this and restore integrity to this process."