Their hockey rivalry is decades old, but the rise of Alex Ovechkin lends it a new fury 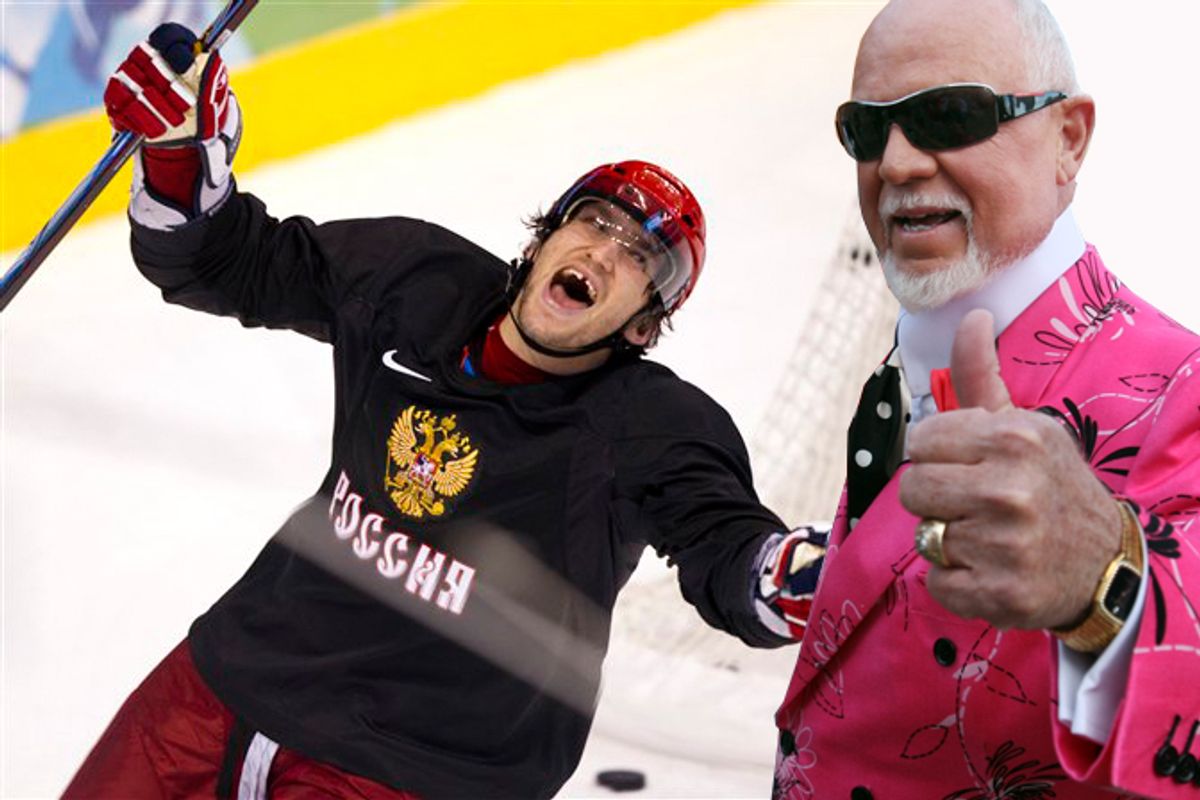 "If I can change, then you [Soviets] can change. Everybody can change!"

Alex Ovechkin, the transcendent 24-year-old Russian who has defibrillated hockey in our nation's capital as the star of the Washington Capitals, is a skating version of Ronald Reagan's Soviet bear, mauling imaginary hunters as he whips a blur of enormous limbs toward the goal. He's missing a front tooth, but that doesn't stop him from beaming a demented grin after every score.

Alex jumps, howls, pumps his fists, launches into the glass -- he does everything short of slurp gushing blood from the necks of opponents. His celebrations are displays of raw, animal energy that inspire awe in both senses of the word. If Ovechkin had existed in the Cold War era, he might have swung a few negotiations Russia's direction.

And his stick skills are what HD TV was made for. One of the constant laments of casual sports fans is that you can't see the puck. High-def reveals every Ovechkin movement. Somehow Alex's coordination keeps up with his frenetic pace as he dribbles between the legs of startled defenders. Ovechkin has an uncanny ability to fire loose pucks goalward, as though he can psychically foresee the results of chaos. He's simply a joy to watch.

He'll skate for Russia for the first time in the Vancouver Olympics Tuesday night at midnight EST against Latvia.

Three decades after the "Miracle on Ice," U.S. and Russian sports fans are living vicariously through the same athlete. We're serendipitously united in a way not seen since Rocky Balboa ended the Cold War. Not all is cheery, though. There's an ominous force up north and it's looking for trouble. Behind the Maple Curtain, Canadians are gnashing their teeth at every Ovechkin plaudit.

It may come as a surprise to puck virgins, but the Canada-Russia hockey feud rivals the Cold War in acrimony. In fact, Prime Minister Louis St. Laurent joined NATO specifically to protect against a hockey-motivated Soviet attack (or to join other Western nations interested in building a nuclear holocaust bulwark; history is subjective). I asked Greg Wyshynski, editor of Yahoo's tremendously named Puck Daddy blog, for actual background on these angry, Sarah Palin-separated foes:

"This goes back to the eight-game Summit Series held in September 1972, when Paul Henderson scored arguably the most famous goal in Canadian hockey history to beat the USSR in Game 8. It's a rivalry that goes through Canada Cups and world championships over the decades. Today, it obviously has the added flair of Alex Ovechkin against [Pittsburgh Penguins superstar] Sidney Crosby, which has been boiled down to its essential clichés by Canadian media as the flashy Russian showboat against the humble, stoic boy next door."

Humble Canadian, yes. Flashy Russian? In the "Miracle on Ice" days we viewed these people as soulless cogs of the Soviet machine. They were at best dispassionate, at worst evil automatons. Now the Ruskies are frivolous celebutantes? Bling-blingsky? Did anyone see this coming, Greg?

"No one thought of the first wave of Russian stars in the NHL as young, flashy celebrities driving fast cars and collecting women like secondary assists. That began to change when [Sergei] Fedorov and [Pavel] Bure were linked to legendary sports fan obsession Anna Kournikova. That the model of the modern Russian player is now Alex Ovechkin completely shifted that paradigm."

But it's more than just exposure to the NHL big-time that's changed for Russia's hockey stars. Russia today is cartoonishly oligarchical in a way that only its propagandist TV network Russia Today can ignore. Or, as the U.K. Guardian puts it, the oligarchs are "given to parading their wealth in a manner that makes American hip-hoppers look like an especially reticent community of Amish farmers." Bling-blingsky indeed.

So it stands to reason that Russia's sports princes would follow suit. Here's the play: Gorbachev to Yeltsin to Yegor Gaidar's "shock therapy" reforms to Ovechkin dancing around, pretending his hockey stick is on fire.

While the Russians preen, curmudgeonly Canadians steam. "Hockey Night in Canada" broadcaster Don Cherry -- Canada's grand old half-insane hockey man -- doesn't necessarily speak for all Canucks when he screeches, "The Russians are NOTHING!" But he plays a valuable role of giving voice to Canada's Archie Bunker id. It's an id that lashes out against Ovechkin for his wild post-goal celebrations and rock-star lifestyle. North American hockey is replete with codes of conduct, and Alex Ovechkin seems to break one every time he breathes. Worse yet, he pays no mind to these manners. Per Cherry's criticism of Alex's theatrics, Ovi laughed, "He's not interesting to me, so he can say whatever he wants. I don't care about him."

Part of Ovechkin's diva tag stems from a cultural chasm between Russian and North American hockey. While North American hockey players were developing a sport oozing with byzantine rules of manliness, Russian players were playing a stripped-down version behind the Iron Curtain. And the Soviet model didn't include fighting as an integral part of the game. Paradoxically, Western hockey's elder statesmen seem threatened over the Russian reluctance to drop gloves and throw.

Watch this 1992 Canadian Broadcast Corporation clip of flamboyant "Kids in the Hall" star Scott Thompson tweaking Don Cherry's conceptions of masculinity. Thompson complains about Europeans bringing down the level of hockey fighting, prompting a thumbs up from Cherry. Then Thompson seamlessly transitions to blaming the "faggy Europeans" for sitting on the sidelines while Canadians slug it out in the gay bars. One thing leads to another and Scott's on poor Don's lap. And, might I add, poor Russians: Cross the ocean to play a sport, and suddenly you're blamed for "making" other people fight needless battles.

How could you fault the Russians for not fully grasping these hockey commandments? For example, it's difficult to see how they're supposed to understand the role of "goons," mediocre talents who specialize in settling scores. One star irks another star, shoves are exchanged. Enter two expendable goons who knock each others' skulls around as the stars hang back and the crowd explodes. By not swinging, you're tacitly conveying elite status (a status rightfully claimed by many who cross the world to play in the NHL). So Eastern Europeans are stuck with a "diva" label that can only be eroded with more injury-risking violence. Welcome to the show, Vladimir Puckofsky.

But there will be no North American "protection" in these Olympics. When Canada plays Russia, expect blood in the air as a rabid local fan base wills its players to check Ovechkin with savage brutality. Expect howls of rage if the Russians should do anything untoward to Canada's Crosby, their understated cosmic rebuke to Ovi's braggadocio. Expect the most emotionally charged Olympic game to not involve America -- which is sad in a way. Damn you, Canada, you stole our existential threat.