"American Idol" recap: Who will make the final 24?

The drama, the pathos, the blubbering! Judgment day arrives, and "AI" embraces the melodrama 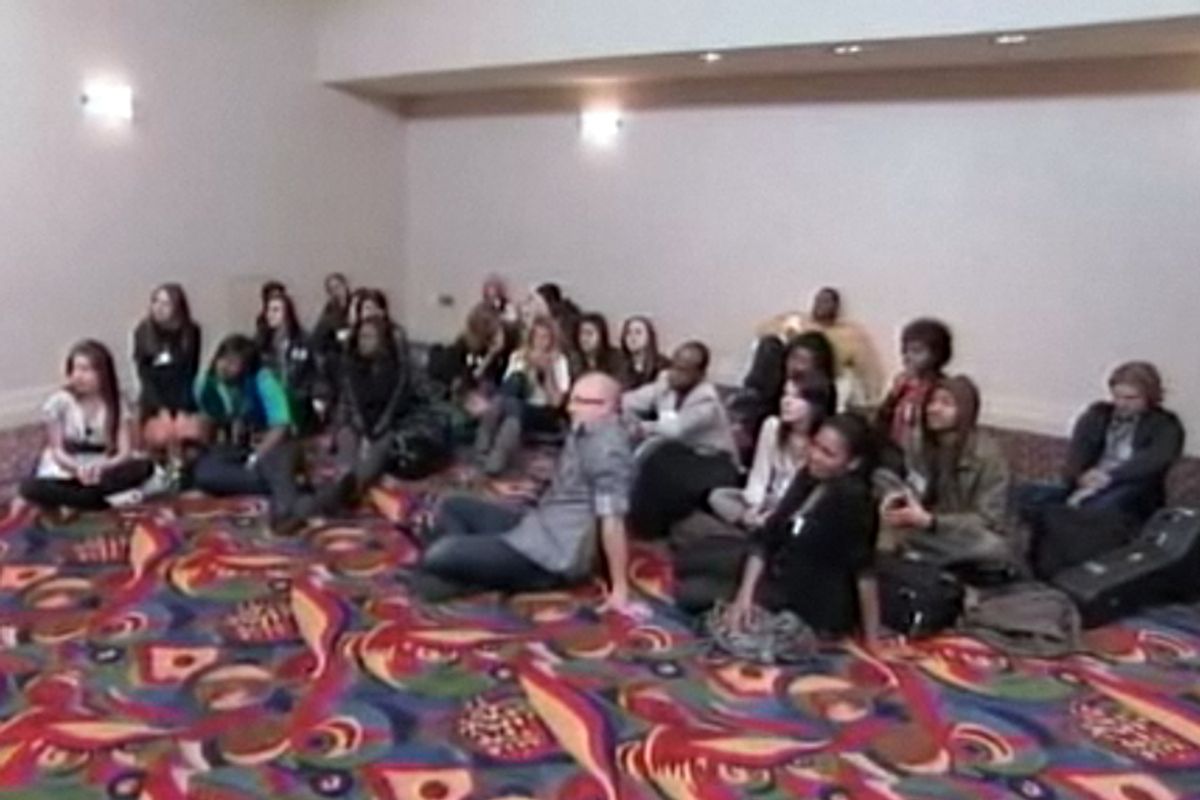 "Imagine leaving your family and home to pursue your dreams. Imagine the struggle, the tears, the fatigue. Imagine that your life hangs in the balance for this day, this moment. THIS IS … 'AMERICAN IDOL'!"

With this dramatic opening, Ryan Seacrest let America know what kind of evening we were in for. I made sure boxes of Kleenex and anti-depressants were close at hand. Seventy-one contestants were going to be reduced to 46 who in turn would be reduced to 24: Twelve men and 12 women.

Oh the drama, the pathos.  Where was Susan Lucci when we needed her?

Who was going to have their dreams shattered? Their lives end? For most of them, all the hard work of their young lives was about to go down the drain. Cruelly and sadly, their talent was going to be sucked into the sewer system of elimination, never to be heard from again.

One can only hope.

After the melodramatic beginning of the show, "American Idol" got down to business.  Contestants were placed in three different rooms to learn their fate forever and ever amen.  Only two out of the three rooms would make it to the next round. Which room was going to be like "Saw VII"? Would there be 3D glasses? Would grief counseling be made available?

Room 1: Okay, Andrew Garcia was in Room 1. That's all you needed to know about Room 1.  Because if you'd seen Andrew Garcia, you knew for certain there was no drama or suspense when it came to him. So, guaranteed, Room 1 was going through to the next round.

Emotions in Room 1: Fear, anxiety and loathing. Sobbing nose-dripping contestants were clutching one another as if they were on a sinking ship.Did they not notice Andrew Garcia? As for me, I wanted to slap them silly. In the infamous words of my father, "Knock it off!"

Room 2: Remember Mary Powers?  She was a Janis Joplin cheap imitation. She was cocky and arrogant and quite sure she was going to be in the final 24. Powers predicted, "My whole life, my family's life is going to change." There was a quick shot of her creepy kid (I knew there would be at least one creepy kid shot). Looking with condescension at the other contestants, she scoffed, "It ain't about them carrying me to the 24.  I'm not intimidated by the competition." Oh, Mary was about to get a life lesson from Humility. Not to boast, but as soon as I heard Mary say this, I thought, "Room 2 is history for sure."

Emotions in Room 2:  See above.

Room 3 contained the likes of Haeley Vaughan and Lee Dewyze. You didn't have to be a high-stakes gambler to figure out the odds on that room.

Emotions in Room 3:  Room 3 was way worse than Room 1 and Room 2. Those contestants were hyperventilating and brown bags were needed in large supply.

Interwoven between the three rooms was the quiet and somber voice of Ryan Seacrest making sure that we all knew how critically important this day was for each and every one of them. This was the most important day of their lives!

I was emotionally drained, and there hadn't even been a commercial.

FINALLY, as I had so accurately predicted, Room 2 was eliminated; the bad news being meted out by none other than the King of Bad News, Simon Cowell.  So, the journey ended for Mary Powers and company. My feelings? Nothing. I felt nothing, except relief.

And I swore I heard violins playing in the background.

Rooms 1 and 3 moved on to the next round. Forty-six contestants left, but sadly and inhumanely, their moment of victory would be short-lived. Half of them would soon be joining the losers of Room 2.

I began anxiously looking at my watch. Contestants were being given their life-long fate and time was running out. Five men and 2 women were told they were going to be one of the 24 remaining contestants. The fate of the remaining 17 contestants would have to wait until Wednesday night's show. Uggggh….I hated the suspense. I don't do well with cliffhangers. I was suddenly sobbing and acting just like Room 2. This was a new low for me.

But for the sake of my loyal "American Idol" recap viewing audience, I pulled myself together and now present to you the first 5 men and 2 women of the Final 24 and their accompanying sob stories:

MICHAEL LYNCHE A.K.A "BIG MIKE":  Big Mike missed the birth of his first child and he was teary and upset. "This competition means everything to me," he slobbered. Gee, an original thought by Big Mike. Simon said, "Mike, the problem was whether you believed you could do this. We have to have people in the finals that feel they can win. We have made a decision. Michael, this is a very good day!" Big Mike slobbered even more, and I felt manipulated.

Cut to commercial -- but first, Ryan Seacrest suddenly turned undertaker and declared, "THE FINAL JUDGMENT … COMING UP NEXT."  I felt like I was reading the Book of Revelations.

DIDI BENAMI:  Didi had been a major kiss-up and sang one of Kara's songs during auditions. Her best friend had passed away and Didi was transforming her "raw emotion born from tragedy" into her singing. Okay, this sounded like a legitimate tragedy, it truly did. But there was so much tragedy during this show that I found myself callously thinking, "Blah, Blah, Blah." This was a temporary blip in my personality and I'm sure my compassionate side will return some day soon.

KATELYN EPPERLY:  Katelyn and her little brothers had been going through the terrible tragedy of their parents' divorce. Katelyn lamented, "Going out there on stage, it's a bright spot, especially for my brothers. It's been a really hard time, a very hard time, mom and dad are getting divorced, but it doesn't mean we can't go on and do good things." Gawd, divorce always gets such a bad rap.

Simon was excited to drink out of his sippy cup and Ellen (with blue eyes that looked a lot like Paul Newman's) was Vintage Ellen as she delivered the good news to Katelyn, "I've done lots of auditions and I've heard the word no too many times. I want you to know right away, because right now you're wondering and want to know if you made it. It takes too much time to hear one thing and another thing, to wait longer would be cruel. I'm going to tell you what the answer is because it's wrong to make you wait. You're going through enough." That Ellen was a jokester. Katelyn was one of the final 24, and her brothers and red-faced parents were elated.

CASEY JAMES:  Casey James had been in a motorcycle accident and was told by the doctors he would never play the guitar again. Casey's American Idol career "took off" from the very beginning. Kara told him to keep his long hair down and Casey complied. Casey suddenly looked like Jesus and Kara looked like Mary Magdalene. She was practically kissing his feet!  Casey is moving on and Kara is kicking her heels.

AARON KELLY: Aaron was the adorable and humble 17-year-old kid who had a tough childhood and time with his biological parents. His aunt and uncle adopted him and apparently did a very good job, especially when it came to manners. Aaron said "ma'am" a lot to the judges. Simon didn't seem to appreciate this.

Back to Ryan:  "INSIDE THE HOLDING ROOM, A STILLNESS LAYS HANGING IN THE AIR." Ryan needs new writers.

LEE DEWYZE:  Lee was a contestant from Chicago with a large voice and a powerful presence. I wasn't too familiar with Lee, so I was slightly skeptical. What I found obvious was that Lee did not have a sob story! This will not bode well for him in the coming weeks.

TODRICK HALL:  Todrick made his Broadway debut with Fantasia in "The Color Purple," so he was no stranger to the stage. This part confused me. I think I needed to remember that this was a talent competition, not an "amateur" talent competition. But there's something about a contestant who is this seasoned that takes some of the fun away. The singers who are waitresses and dockworkers, I love them. But Todrick seemed genuine, so fine, he can move on to the next round.

TO BE CONTINUED … Seriously?

Right when things were finally looking up and it seemed that the sobbing and tears had all dried up, the two-hour episode was over. America must now wait until Wednesday night's episode to find out who the remaining 17 contestants will be.

Appropriately enough, the show ended with a shot of a bathroom stall and the sound of more LOUD SOBBING. Good thing there are some honest to God talented singers this year. If it weren't for all those talented singers, I would have sworn on a stack of Bibles that Season 9 of "American Idol" should be flushed down the toilet. It looks like that won't be the case, and we can all put away the bottles of Imodium.

As for the sob stories, keep the Kleenex handy. Those stories aren't going anywhere anytime soon.