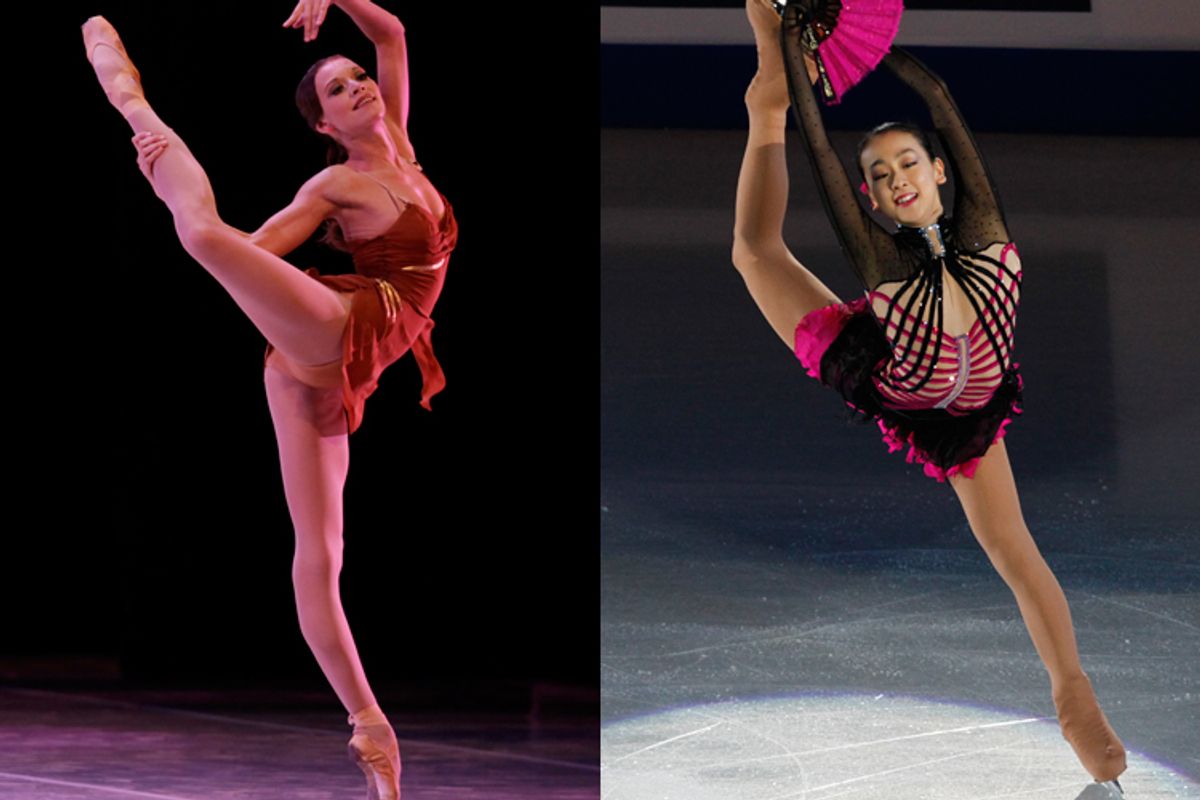 Figure skating and dance both deal with movement, balance and poise. They both demand balletic precision and seamless choreography, limb articulation and gazelle-like leaps. But where ice skating focuses on athleticism, dance concentrates on artistry, and all the whiz-bang double axels, bedazzled unitards and cheesy music can make skating seem something like ballet’s embarrassing cousin. We wondered: What do real dancers -- the ones who perform on land, without blades strapped to their feet -- think about figure skating? Salon tracked down a few to get their opinion.

If one is gay, as am I, one is supposedly predisposed to adore figure skating. I missed that day at Gay High. I watch a certain amount of skating. I like that it is fast and difficult and only rotates in one direction. I love the costumes. I hate the music. Like many sports, it has become brutal and artless. The tricks are too hard to be beautiful. I used to love school figures [the original set of mandatory shapes skaters did in competition]: the endless figure-eights and edges and concentration. But that old-style skill is not interesting enough for today's television consumers.

Figure skating is set to music, so it passes itself off as an art form, but in the end, the ones who win aren’t necessarily the most artistic. In the 2004 Olympics, [Japanese skater Shizuka Arakawa] won over Sasha Cohen, though I was far more moved by Cohen’s performance. A lot of times they skate through the music. It’s hard to watch as a dancer because you want that musicality.

As a dancer, I hate the idea of competition. Ballet is supposed to be an art form. Is a Picasso better than a Rothko? No, they’re just different. The technical elements are part of skating, but it’s something I don’t envy at all. It’s hard enough just to get out there. My heart goes out to a lot of the Olympians. It’s an insane amount of pressure.

As a dancer, I see figure skating as a separate but related art form -- I imagine that the incredible poise, balance, flexibility and coordination you develop as a figure skater can translate into dance, and vice versa. But at the same time, from my little experience as a clumsy recreational ice skater, it seems to require an entirely different kind of physical intelligence than, say, jumping straight up and down as an Irish dancer. In terms of watching it, I think of it as a closer relative to dance that emphasizes virtuosity and spectacle -- like classical ballet, Broadway-style jazz, even "Riverdance," all of which have a kind of "look what I can do" mentality -- than what we call "postmodern" dance.

My mentor loved figure skating. I kind of watched it at the time and said, "Jeez, the line is so clunky, those skates are so big." I just didn't get it. But the art of skating has gotten closer and closer to dance. They've got those nude-colored skates now, the choreography is so much better, and the choice of music is so much more artistic.

I think dance and figure skating have grown together over the years. There's stuff that they do that we don't, and stuff that we do that they don't, but there's a lot of overlap. I think the choreographers have incorporated the physical elements of skating with emotional meaning, so it's no longer just tricks. The art and the technique reach a new level every year.

I get really mad [at figure skaters] because they throw away talent and expressive moments and go into a sports-like stance and get stiff. The minute they're finished with their little routine, they change character. I hate that.

I'm not saying there's not incredible artistry in the Olympics, but I get really mad when I see that figure skaters get their expressions beaten out of them by coaches that choose the wrong music for them and the wrong routine for them. To me art is and should be first, because that brings out the uniqueness and the real truth about human beings. The checklist of tricks -- I know how it developed, and I know why they need it. But I think it's really ugly in the long run.

Mary Murphy, ballroom dance champion and judge on "So You Think You Can Dance":

I love watching figure skating. The pairs short program was Sunday, and I saw every one of them. My favorite couple was Savchenko and Szolkowy from Germany. Not only were all their jumps fantastic, I found their choreography so clever and artistically above the rest. The Chinese couple [Xue Shen and Hongbo Zhou], even though technically superb, are missing artistic value and passion. In third position, the Russian couple [Yuko Kavaguti and Alexander Smirnov] was beautiful to watch but the female still needs to develop style. I still would not count out U.S. [pair figure skating couple] Keauna McLaughlin and Rockne Brubaker. Nothing is more beautiful than combining athleticism and artistic style. It is one of the more magical moments in the Olympic Games.

I really enjoy watching figure skating! I almost always cry. The speed and the smoothness of it seems to defy gravity. I root for the tall guy. It's so much harder for tall men to pull off all that stuff. That's why gymnasts and Baryshnikov are tiny, because the laws of physics are against them. You fly like the wind, and it's cold and slippery. There's an amazing amount of skill involved. All the skaters have really extensive dance training. They're always getting after the women about the grace and transitions -- if you skate like an athlete you get knocked for it. They want some fluidity and lovely artistry.

Where dancers disagree with figure skating is the idea of competition -- the idea of artistry being competitive is anathema. And it's so hard for me to watch it because my heart's in my throat the whole time. It's so much pressure that it's hard to enjoy. And when they fall down you kind of go, "Well, thank God they've fallen down so now they can just enjoy it."