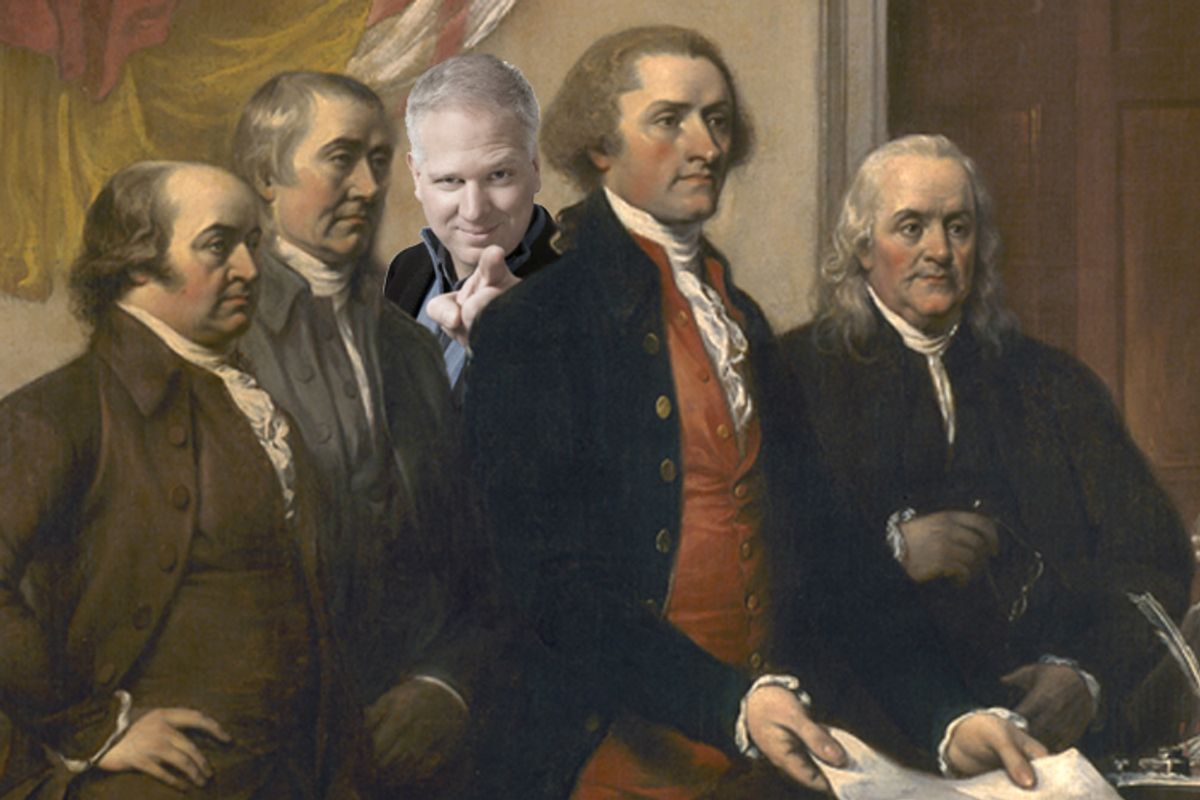 Today's conservatives are obsessed with the Founding Fathers. You hear it from Glenn Beck reliably on a daily basis, and almost as often from his allies and acolytes: The central problem in American life and politics is that we’ve strayed too far from the principles of George Washington, Thomas Jefferson, Thomas Paine and the rest of the gang. As Beck likes to put it, with characteristic subtlety, our choices are 1776 and 1984. (Note also Newt Gingrich's bizarre Revolutionary War fantasy earlier this year, in which he "live-tweeted" Washington’s crossing of the Delaware, obviously imagining himself as the hero of the Revolution.)

In keeping with this kind of rhetoric, a group of more than 80 prominent conservative activists are gathering today near Mount Vernon, Washington’s old Virginia estate. With characters like anti-tax organizer Grover Norquist, National Review editor Kathryn Jean Lopez and former Attorney General Ed Meese in attendance, the group will release the "Mount Vernon Statement." Modeled on a manifesto produced by the circle around William F. Buckley in 1960, today’s statement will seek to reunite conservatives around fundamental principles.

We recommit ourselves to the ideas of the American Founding. Through the Constitution, the Founders created an enduring framework of limited government based on the rule of law. They sought to secure national independence, provide for economic opportunity, establish true religious liberty and maintain a flourishing society of republican self-government.

These principles define us as a country and inspire us as a people. They are responsible for a prosperous, just nation unlike any other in the world. They are our highest achievements, serving not only as powerful beacons to all who strive for freedom and seek self-government, but as warnings to tyrants and despots everywhere.

Each one of these founding ideas is presently under sustained attack. In recent decades, America’s principles have been undermined and redefined in our culture, our universities and our politics. The selfevident truths of 1776 have been supplanted by the notion that no such truths exist. The federal government today ignores the limits of the Constitution, which is increasingly dismissed as obsolete and irrelevant.

The conservative movement has always been made up of fractious elements, and managed to come together in the rough form of the Republican Party thanks to what’s often described as "fusionism": The alliance of the small-government, economic-growth types with the social and religious conservatives. Historically, unfettered capitalism has often threatened the traditional moral and economic vision of many Americans, and begotten a conservative populist backlash, straining the bonds that hold together the American right wing. This tendency is arguably visible today in the tea parties' wariness of the political elites, including Republicans, and their coziness with Wall Street and corporate interests.

The emphasis on a glorious past replete with ancient, inherited truths is the obvious strand connecting these two groups. Libertarian types like Norquist can fondly recall a time before the income tax or Medicare, and social conservatives get to be all wistful about their imagined good old days. All the disconcerting changes of the present become the property of the scary left in this kind of nostalgic rhetoric. That's why it features so centrally in such a self-conscious conservative mission statement as this one.

Of course, if you were actually hoping to find out what’s meant by returning to "the self-evident truths of 1776," prepare for disappointment. Brent Bozell told the Washington Post that the statement is "a compass for every single issue, whether it's social, economic or national defense conservatives. It's meant to guide you." Speaking with Politico, he got more specific. "Where in the Constitution is health care a mandate? The answer is nowhere -- it's nowhere in the Constitution [that] is health care a right."

It seems notable here that the group at Mount Vernon, quite consciously, includes no actual politicians. The statement is being pitched as a warning against the temptation of centrism. But however many insults can be lobbed at elected Republicans, it's hard not to take their side here. Elected officials do actually have to deal with the obligations of gaining and holding office. This is the reason that many are viewed by the GOP's activist base as sellouts: Because they're somewhat responsive to the actual demands of the electorate, and more broadly, the imperatives and strains placed on the government by modern life. A prime example of this is how the Republicans in Congress have rallied to the defense of Medicare in recent months. Medicare is classic big-government socialism as far as the conservative base is concerned, but it's also popular and basically necessary.

The GOP activists can get away with wishing it was 1776 because they don’t actually have to go home and face angry electorates after acting out an anachronistic fantasy. Congressional leaders like Rep. John Boehner, R-Ohio, and Sen. Mitch McConnell, R-Ky., can’t afford to play pretend all the time. Back in 1776, nobody needed Medicare, because the average lifespan was around 35. In 2010, just citing "self-evident" truths ain’t going to cut it.