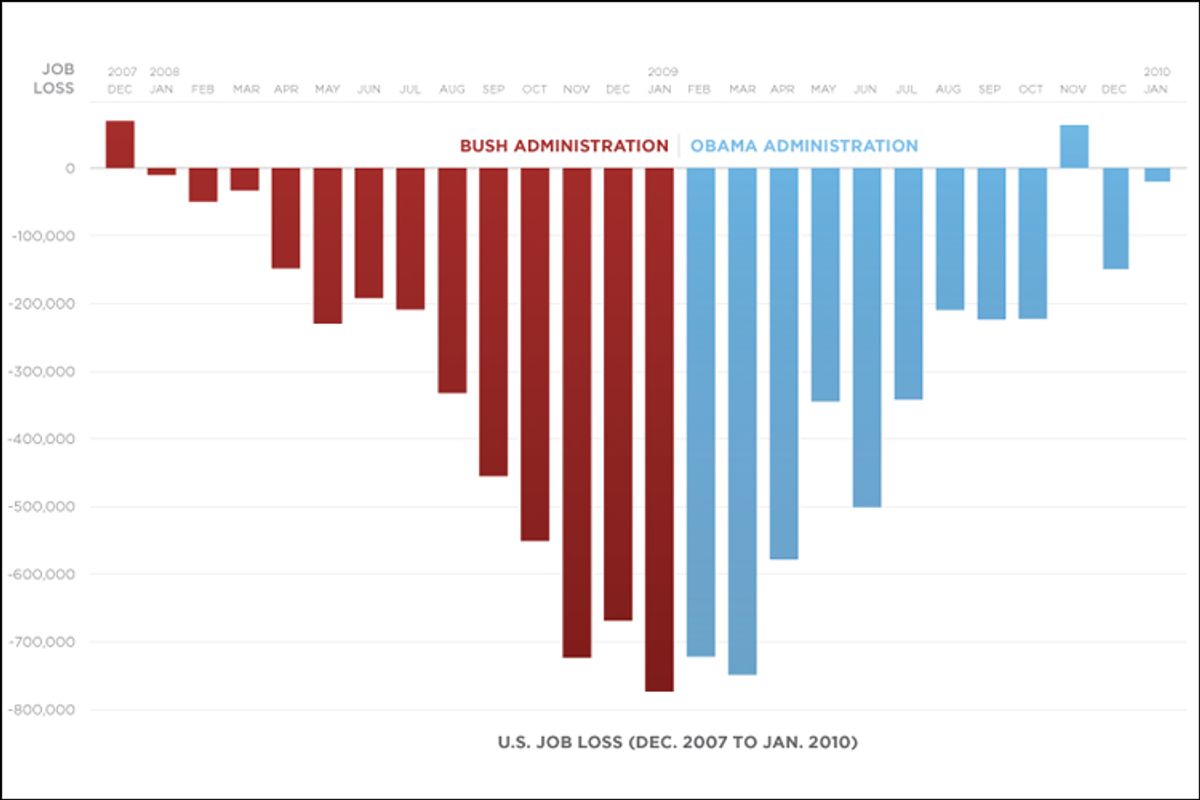 On the one-year-anniversary of the signing of the American Recovery and Reinvestment Act, President Obama gave a spirited defense of his administration's stimulus spending. The Recovery Act, he asserted, "rescued the economy from the worst of the crisis." Failure to enact it, he claimed, "would have led to catastrophe." Because of it, he said, two millions Americans "who would otherwise be unemployed" currently have jobs.

"A second Depression is no longer a possibility," he declared.

Let's hope so. Moments before the president spoke, the government reported that both industrial production and housing starts had risen in January. In both cases, the numbers were better than economists had expected, giving some support to the narrative of a recovering economy. But not much. Industrial production is still ten percent below its pre-recession levels; and housing starts have bounced up and down around the same anemic level for the last eight months.

But even if the numbers are proof of an ongoing recovery, most Americans just don't care. The only statistic that means anything is unemployment, now. As long as it hovers near 10 percent, Obama can shout until he is blue in the face about how much worse we'd all be without the Recovery Act and it won't make a damn bit of difference to his poll numbers.

You can make a pretty picture displaying how much better the current jobs situation is than what prevailed a year ago, but asking Americans to imagine an alternate reality in which the U.S. is still stuck deep in a recession or sliding into a Depression isn't an easy sell. And that's natural: We are obviously more likely to care about how we feel today than how we would have felt had things gone differently.

And we don't feel good. Obama acknowledged this. "It doesn't yet feel like much of a recovery, " he said. And he vowed to keep working, and called on Congress to pass a jobs bill.

But his words were unlikely to change the reality that, according to a CBS-New York Times poll, only six percent of Americans believe that the stimulus has created jobs. The only thing that will change that consensus is falling unemployment. And since Obama's own economic advisers don't anticipate any significant decline in the unemployment rate for years to come, the political prognosis for Democrats, and Obama, looks pretty bleak.

UPDATE: Don't miss David Leonhardt's explanation of why the stimulus worked in the New York Times.