Fire department is searching the building for victims. Plus: Slide show 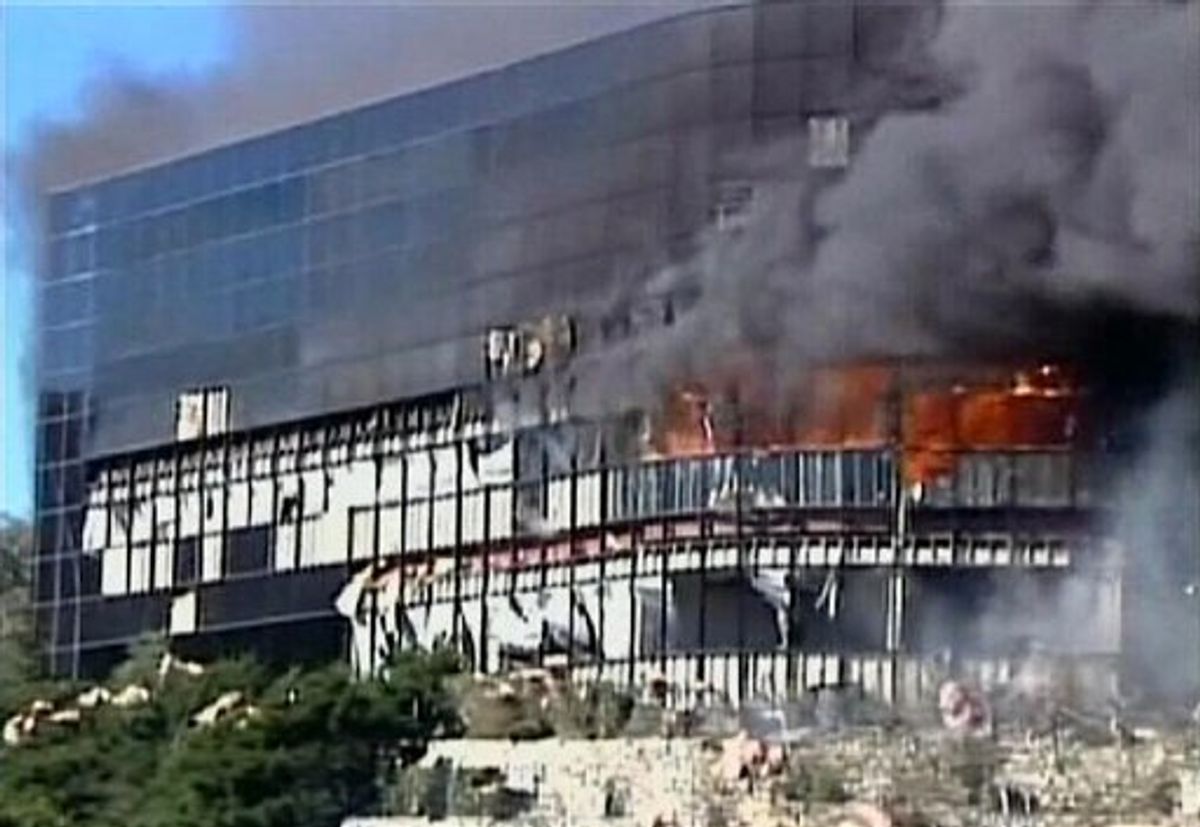 In this image made from KVUE-TV video, smoke billows from a seven-story building after a small private plane crashed into the building in Austin, Texas on Thursday Feb. 18, 2010. (AP Photo/KVUE-TV) MANDATORY CREDIT (AP)
--

The events in Austin are now slowing down, so we're going to stop our live updates for now. But we'll keep our eyes and ears open for any new developments.

5:53 PM: In a news conference, the Chief of the Austin Police Department calls the incident a "criminal act by an individual." He is reluctant to call it terrorism until more information about the pilot's motivations come to light.

5:43 PM: The Chief of the Austin Fire Department says that the fire is primarily extinguished and that the fire department is "currently doing a search for victims and anyone unaccounted for."

5:12 PM: Gov. Rick Perry, R-Texas, releases a statement commending everyday citizens who responded with "selfless acts of heroism." The statement also says that his office is  working with law enforcement agencies and warns against speculations about what is "currently an open investigation."

4:53 PM: A federal law official tells CNN that there is no indication that Joseph Andrew Stack was working with anyone else.

4:32 PM: On CNN, Rep. Michael McCaul, R-Texas, says he will ask the Committee on Homeland Security to review regulations regarding small aircrafts.

4:24 PM:  Former FBI assistant director Thomas Fuentes on CNN says, "If this were ideologically or politically motivated, then it's domestic terrorism." In response to Rick Sanchez's justification of CNN's reluctance to use the term, Fuentes tells him, "It doesn't have to be a major conspiracy to be terrorism."

3:45 PM: According to CNN, federal officials have confirmed that the pilot, Joseph Andrew Stack, did write the online manifesto that has been circulated by news outlets over the past few hours.

3:21 PM: On CNN, retired police investigator Lou Palumbo calls Rick Sanchez out for refusing to refer to the crash as a terrorist act. Palumbo points out, "If this individual had done this in Iraq, we'd be calling him a suicide bomber ... that would be a terrorist act."

3:17 PM: According to MSNBC, authorities believe today's crash started as a domestic dispute. MSNBC reports that the pilot, Joseph Andrew Stark, set fire to his house while his wife and daughter (or stepdaughter) were still inside. A neighbor rescued the two from the burning house.

3:08 PM: CNN reports that authorities are looking for explosives at Georgetown Municipal Airport, where the pilot took off this morning. They are also searching the car that Joseph Andrew Stack left at the airport for explosives.

2:59 PM: CNN’s Rick Sanchez interrupts his narration of the scene in Austin, lowers his voice, and does his best impersonation of Walter Cronkite:

I have something else now that I have to share with you. This is breaking news that CNN has now confirmed. After all of the information that we have shared with you – this is totally different than what is going on right now in Austin, Texas. But I have just been handed a, uh (puts on half-glasses and looks down at paper) , I have just been handed a piece of paper which is somewhat ominous to report. Uh, CNN is now reporting that Iran may be working on a nuclear warhead.

Usually that kind of build up is reserved for ... something that's actually surprising.

2:53 PM : CNN is reporting that a 12-year-old girl and a woman may have been rescued from the burning house thought to belong to the pilot about 45 minutes before the plane crashed. The girl is thought to be Joseph Andrew Stack's stepdaughter. However, a conflicting report says that the woman and girl arrived at the house at that time.

2:39 PM: CNN and Fox News are reporting that the pilot, Joseph Andrew Stack, is dead.

2:27 PM: The pilot's family releases a statement saying that they have no comment at this time and requesting the media leave them alone. The family will contact the media tomorrow to answer questions, according to the statement.

Re. Austin: Why does an allgd grievance against govt mean it's "not terrorism" (DHS/Brennan/Cable TV)? Can't white Americans be terrorists?

1:45 PM: CNN’s Ali Velshi interrupts his train of thought to tell us that “Rick Sanchez has a suicide note.” Sanchez whips out the half-glasses to read his “exclusive,” which has probably been viewed by several million people on the Internet over the last hour. Sanchez proceeds to read the 6-page rant (which no one knows yet to be authentic).

1:44 PM: A federal official told CNN that the plane was not stolen. The government believes that the pilot owned the plane and the house found burning in the Austin area.

1:33 PM: Austin Mayor Lee Leffingwell says that the incident is “totally confined.” He told the press, “There have only been two folks taken to the hospital. One person is unaccounted for. Everyone else is accounted.”

1:28 PM: CNN is reporting that the plane belonged to a man named Joseph Andrew Stack. Rumors are floating around that the pilot wrote this suicide note, where he rants about America, capitalism and the IRS, before crashing the plane.

1:15 PM: CNN is reporting that the crash was intentional. According to a federal official, the pilot set fire to his house and stole the plane before crashing it into the building.

A low-flying small plane crashed into an office building that houses the Internal Revenue Service in Austin, Texas on Thursday, and at least one person was missing, witnesses and officials said.

Assistant Austin Fire Chief Harry Evans said two people have also been taken to a hospital. Their conditions were not immediately known.

A law enforcement official said the crash did not initially appear to be the result of a crime or terrorism. The official spoke on condition of anonymity because the person was not authorized to publicly discuss the crash.

Thick black and gray smoke was billowing out of the second and third stories of the building Thursday as fire crews using ladder trucks and hoses battled the fire. Dozens of windows were blown out of the hulking black building, and vehicles traveling on a nearby highway paused to look.

Peggy Walker, an IRS revenue officer who works in the building said she was sitting at her desk when the plane crashed.

"It felt like a bomb blew off. The ceiling caved in and windows blew in. We got up and ran," she said.

Matt Farney, 39, who was in the parking lot of a nearby Home Depot, said he saw a low-flying private plane near some apartments and the office building just before it crashed.

"I figured he was going to buzz the apartments or he was showing off," Farney said, adding that the plane dipped down. "It was a ball of flames that was high or higher than the apartments. It was surreal. It was insane. ... It didn't look like he was out of control or anything."

Sitting at her desk about a half-mile from the crash, Michelle Santibanez said she felt vibrations. She and her co-workers ran to the windows, where they saw a scene that reminded them of the 2001 terrorist attacks, she said.

Fire crews were inside the building battling the blaze and looking for survivors, Evans said.

Federal Aviation Administration spokesman Lynn Lunsford said the agency was investigating but had no immediate information on the type of plane or how many people were on board.