Girls driving under the male influence 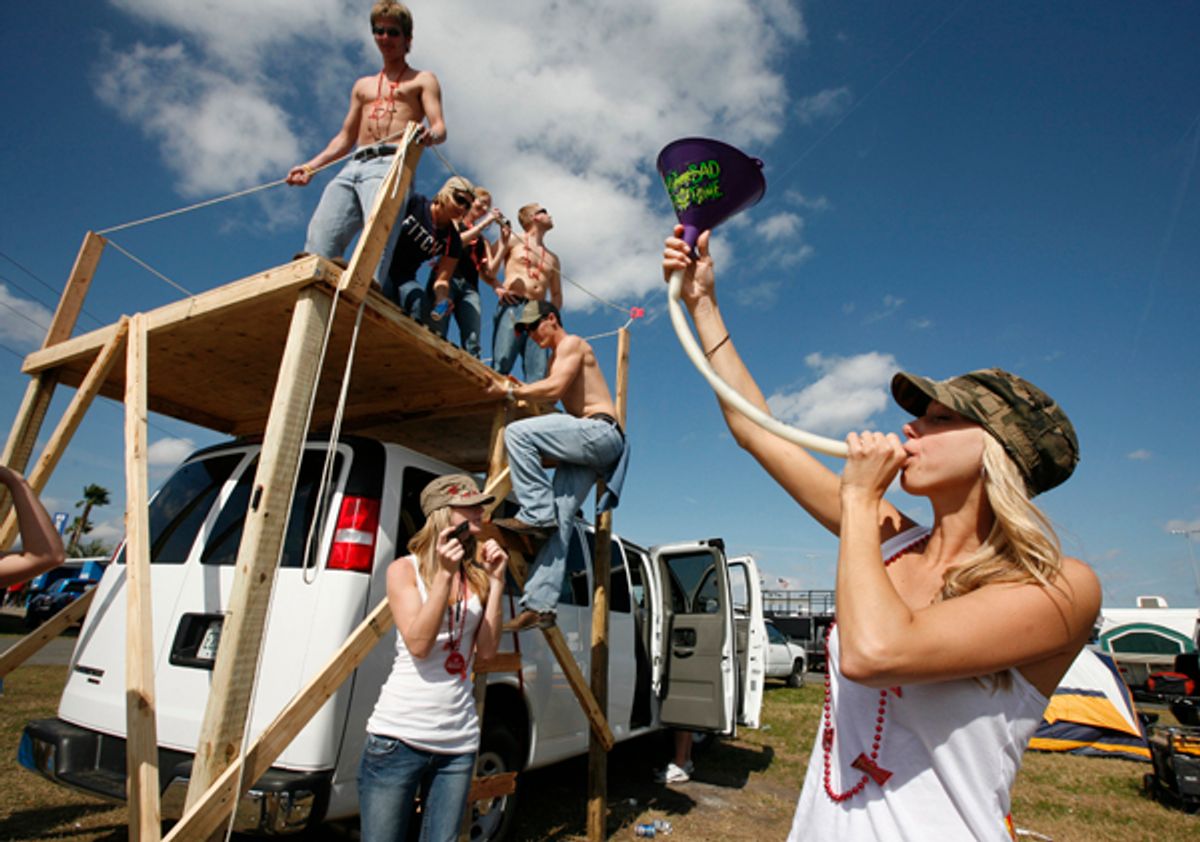 He stumbles across a suburban lawn littered with crumpled plastic cups. A pair of car keys dangle from a fingertip and a young woman is wrapped around his arm. He's the stereotypical image of a drunk driver that has been imprinted on my brain after countless PSAs and bad made-for-TV movies. He's a close relative of another unflattering male archetype: the bad teenage driver with a serious need for speed and a devil-may-care attitude. But two new studies suggest that ladies may be challenging these assumptions. Not only has the number of young women driving drunk and getting into fatal crashes reached a historic high, but more teen girls than boys now admit to aggressive driving.

Researchers looked at alcohol-related accidents over a 15-year period and found that the proportion of female drivers between age 16 and 24 involved in deadly crashes increased by 3.1 percent, while the rate among young men rose 1.2 percent, according to HealthDay News. As for sober but nonetheless dangerous driving, insurer Allstate reports that 27 percent of teenage girls admit to speeding, compared to 19 percent of boys. The report, Shifting Teen Attitudes: 2009 State of Teen Driving, also found that 16 percent of teenage girls classify themselves as aggressive drivers, while 13 percent of boys do.

Interestingly enough, in separately analyzing both reports, experts arrive at a shared explanation: Young women are acting like dudes. In its coverage of the Allstate report, the Chicago Tribune quotes Allan Williams, former chief scientist at the Insurance Institute for Highway Safety, as saying: "As more young women participate in activities like competitive sports and take on a more assertive lifestyle, they're narrowing the gender gap when it comes to risk taking in all aspects of their life."

As for the HealthDay News article, reporter Steven Reinberg paraphrases Laura Dean-Mooney, president of Mothers Against Drunk Driving (MADD), as suggesting that "women are picking up some of the bad habits that men have." Dr. Judy Schaechter, a pediatrics professor at the University of Miami Miller School of Medicine, told the news service that women's rising drunk driving rates might be blamed on the "loss of the notion of what it means to be feminine." Presumably, she means that it's now more acceptable for women to get sloppy-drunk right alongside men.

If this all sounds familiar, it should: Last summer, Kate Harding criticized a trend piece on mothers who drink and drive, which quoted the CEO of MADD as saying that "women are picking up some of the dangerously bad habits of men." (Judging from the paraphrased quote above, the organization may need to refresh its talking points.) She summed up the findings like so:

Taken together, these two recent reports present similar problems: One is based on self-reporting and the other, while at least built on solid evidence, raises an alarm that is dramatically muted when you consider that the rate among young women is still far lower than that of young men. The fact is, men still account for the vast majority of fatal drunk driving accidents. Yes, it appears the drunk-driving gap is ever so slowly narrowing -- but as Harding put it: "OK, well, maybe let me know when the gap gets a little narrower than 80/20" (the current rate in California). And when that happens, maybe I'll spill some more digital ink on how greater equality and social freedom is bound to produce some less than desirable effects.