Why the Mount Vernon Statement was comedy gold 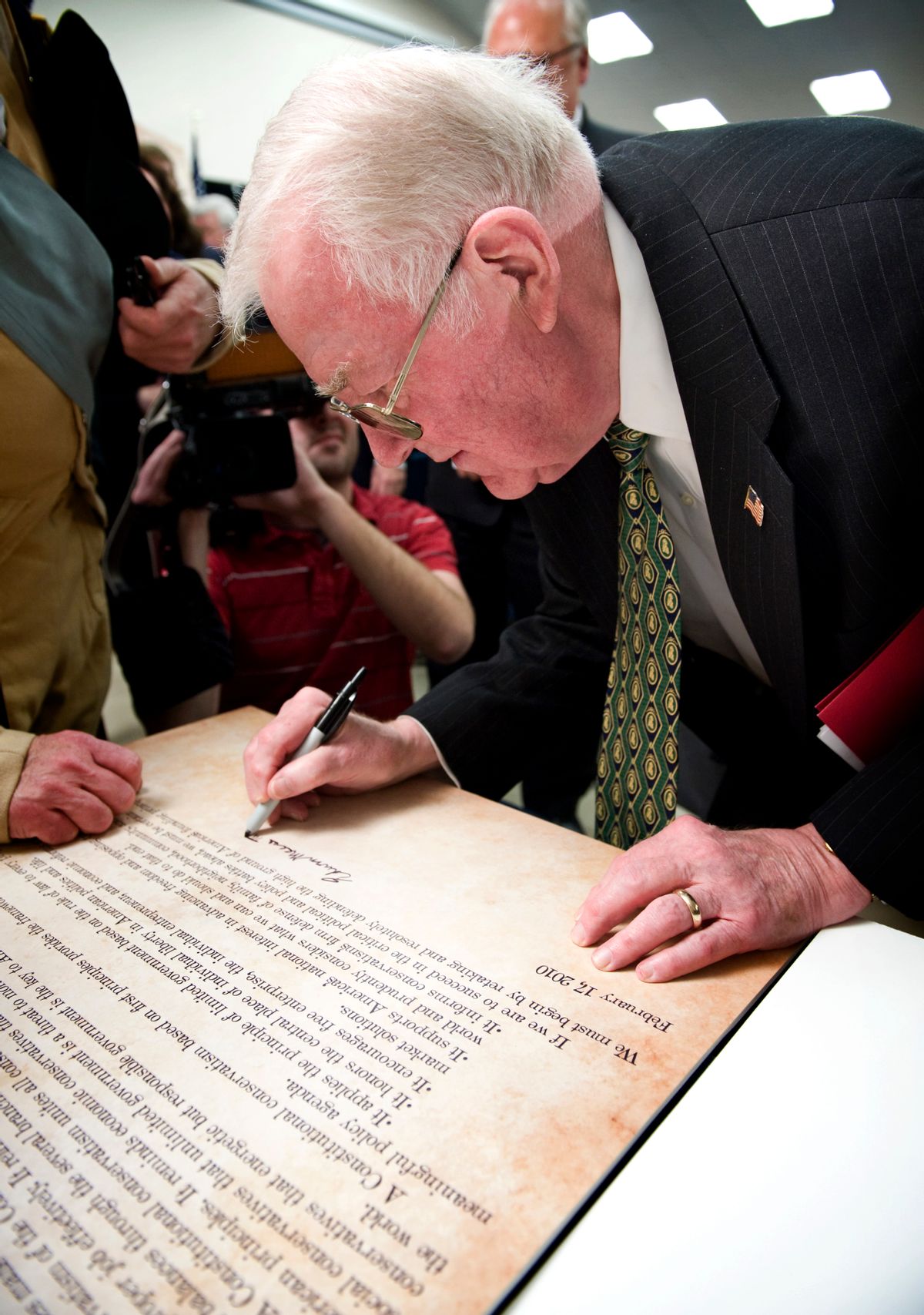 While the Mount Vernon Statement is inflated with the same stale hot air as any other partisan screed, its signing (at a location "near" George Washington's fabled home) certainly offered entertainment value. Producing this show of constitutional kitsch, its impresarios managed to combine banal affectation with reckless impertinence. Festooned in woebegone period drag, they presented a gallery of Beltway suspects as the intellectual heirs of the Founders.

Only these people would have sufficient gall to roll out Edwin Meese III as an elder statesman worthy of Washington's mantle -- and only because the mainstream media fosters amnesia about right-wing scandal will they get away with it. Political journalists never grow weary of reliving the Starr investigation of the Clintons, and still relish every detail whether true or false, but they cannot seem to recall how Meese's career ended.

So let me refresh their memories: Meese served as attorney general under Ronald Reagan until a scandal involving many millions of dollars in rigged Pentagon contracts sent his close friends and aides to prison and forced him to resign in disgrace. Meese himself helped to arrange defense deals and other scams for his pals and financial benefactors, narrowly escaping indictment and bringing dishonor to the White House and the Justice Department.

The scandal was known as "Wedtech," after the Bronx-based tool and die company that bribed its way into favor among crooked Democrats in New York and crooked Republicans in Washington -- and eventually became the  subject of a special prosecutor investigation, a scathing ethics probe of Meese by the Office of Professional Responsibility at Justice, and a pair of excellent books by journalists James Traub and Marilyn Thompson (both of whom concluded that Meese deserved prosecution).

All that took place two decades ago, so maybe it is just too hard to remember. But what about Grover Norquist, another distinguished signer of that Mount Vernon document? He turned up as a petty boodler in the most massive lobbying scandal of the past decade, known as the Abramoff affair after its central figure, Jack Abramoff. Now serving federal time for fraud and other offenses, Abramoff was an old pal of Norquist from College Republican days -- which is why Americans for Tax Reform, Norquist's nonprofit group, became a conduit for lobbying funds from the Mississippi Choctaw tribe to another Abramoff crony, Ralph Reed. Naturally, Grover took a cut for his troubles -- yet somehow his little misadventure has disappeared from media memory as well.

Then there's David Keene, the veteran right-wing leader who makes his living as a  professional lobbyist for the Carmen Group -- which represents myriad corporations, local governments, unions and other interest groups seeking a share of taxpayer largesse (including stimulus funding, as its Web site notes).

It is amusing to listen to these characters lecture us on "virtue" and "godliness" and "limited government," just as it is fun to watch the hypocrites cavort in a play by Moliere or an episode of "The Daily Show." Just be sure to keep your hand on your wallet.