Villains abound in the suicidal Austin pilot's final rant. But a change in the tax code is enemy No. 1 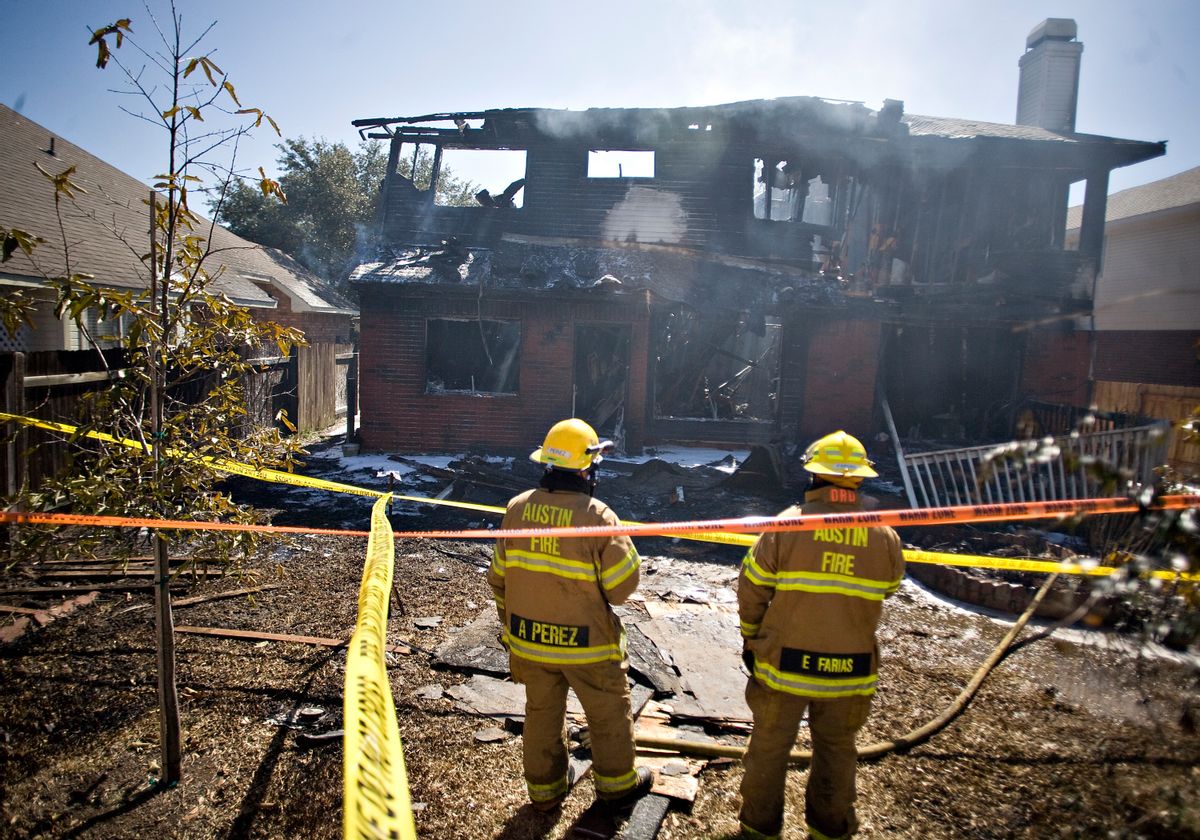 Two firemen are seen at the home belonging to Joseph Stack, after Stack apparently set it on fire according to two law enforcement officials, Thursday morning on Feb. 18, 2010 in Austin, Texas. Stack, a software engineer furious with the Internal Revenue Service plowed his small plane into an office building housing nearly 200 federal tax employees on Thursday, officials said, setting off a raging fire that sent workers fleeing as thick plumes of black smoke poured into the air. (AP Photo/ Thao Nguyen) (AP)
--

The litany of grievances recorded in Joseph Stack's suicide manifesto is so vast and all-encompassing that it puts your average paranoid conspiracy theorist to shame. Few targets escape his disgust and hatred: The government, the drug and insurance companies, "the joke we call the American medical system," the "vulgar, corrupt Catholic church" and equally "corrupt unions," the "sleazy executives" of accounting firm Arthur Andersen and Detroit's auto companies, savings and loans firms, the city of Austin, wealthy bankers, "pompous political thugs and their mindless minions" and, of course, the ultimate target of his wrath, "Mr Big Brother IRS man."

There is a disturbingly familiar echo here of Michael Douglas' character in the 1993 movie "Falling Down" -- the engineer betrayed by larger forces who goes mad, and wonders, at the very end, how he became the "bad guy." Attack dogs of the left and right will no doubt strive to plug Stack into a politically appropriate box. But good luck with that. Stack's last words offer as clear proof of ideology-transcending insanity as any psychiatrist could demand. Even more compelling, at the heart of his lament is a grievance so specific as to make larger political themes more or less irrelevant. Judging by his own words, Stack was driven mad by a 1986 change in the tax code governing independent contractors working in the world of high tech.

In the early 1980s, writes Stack, he was a "wet-behind-the-ears " contract software engineer in Southern Calfornia. As such, he fell into a class of worker that has always enjoyed (or suffered) from ambiguous tax status. A truly independent contractor is responsible for his or her own taxes and other expenses -- such as healthcare -- and many libertarian-minded software geeks have always liked it that way.

But just as many corporations in the high-tech world have consistently sought their own advantage in pretending that full-time employees were actually independent, and thus could be denied worker benefits.

Somewhere in between were true independent contractors who had long-standing relationships with single companies, and for a while, the tax code recognized this explicitly. There's a nice (and speedily assembled) treatment of this point in the Tax Foundation's Tax Policy blog written by Joseph Henchman.

In 1978, Congress passed a moratorium that allowed high-tech workers who had previously considered themselves independent contractors to continue doing so. But then came Stack's nemesis, Section 1706 of the Tax Reform Act of 1986, which removed that protection from certain "technical personnel" -- specifically singling out those who provided services as an "engineer, designer, drafter, computer programmer, systems analyst, or other similarly skilled worker."

As part of the 1986 Tax Reform Act, that moratorium was abandoned for high-tech consultants, who then faced the same employee/independent contractor test as everyone else. High-tech consultants were targeted because there was strong evidence that they were abusing the moratorium as a tax shelter and because it fit a need to offset a separate unrelated tax change in the Act that would result in a revenue reduction.

Was Joe Stack abusing the moratorium as a tax shelter? Or was the amendment to the tax code just a naked government grab for cash from the hardworking pillars of the high-tech economy? Perhaps the avalanche of reporting to come in the days ahead will enlighten us. If you read between the lines of Stack's manifesto, there are signs that, throughout the years, he may have been inclined to take an aggressive approach to his tax obligations. All we know for now is that the change in his status in 1986 was of seminal, lifelong importance, and he took it very personally. In his own words, the crafters of Section 1706 of the Tax Reform Act of 1986 "may as well have put my name right in the text of [that section]. Moreover, they could only have been more blunt if they would have came out and directly declared me a criminal and non-citizen slave. Twenty years later, I still can't believe my eyes."

You don't have too look far in the software biz to find a libertarian programmer who distrusts the government. It's a tension built into the industry's DNA. Thirteen years ago, when covering a federal appellate court decision that Microsoft was illegally denying employees benefits and stock options by claiming that they were independent contractors, I discovered that there was a strong division in the software world over the implications of that suit. If you were a lower-paid temp you applauded the chance for full employment, complete with all the perks. But if you were a higher paid programmer-for-hire you hated how, in the aftermath of the suit, you had to jump through multiple hoops to prove to both the IRS and prospective employers that you were a "real" independent contractor. Protecting other workers' rights made it harder for you to find your own work. It was crazy-making!

The paradox is hard to resolve: How do you protect the individual freedom and mobility that made regions like Silicon Valley flourish, while at the same time ensuring that employers could not get away with outright exploitation? That same paradox is visible writ large in the current political debate over the role of the government in the economy -- it is echoed in the opening words of the manifesto, in Stack's reference to the principle of "no taxation without representation."

There is a not insignificant number of Americans who view the IRS as a confiscator of liberty, without accepting the social contract that judges government useful to protecting the welfare of all. Most of us, however, whatever our feeling toward the tax man, manage to negotiate that confusing, contradictory territory without, in the end, flying a plane into an IRS building. Joe Stack blamed an amendment to the tax code in 1986 for ruining his life. But one suspects that the wiring in his brain was the real villain.

How The World Works Joe Stack