Give "sexy" figure skaters a break 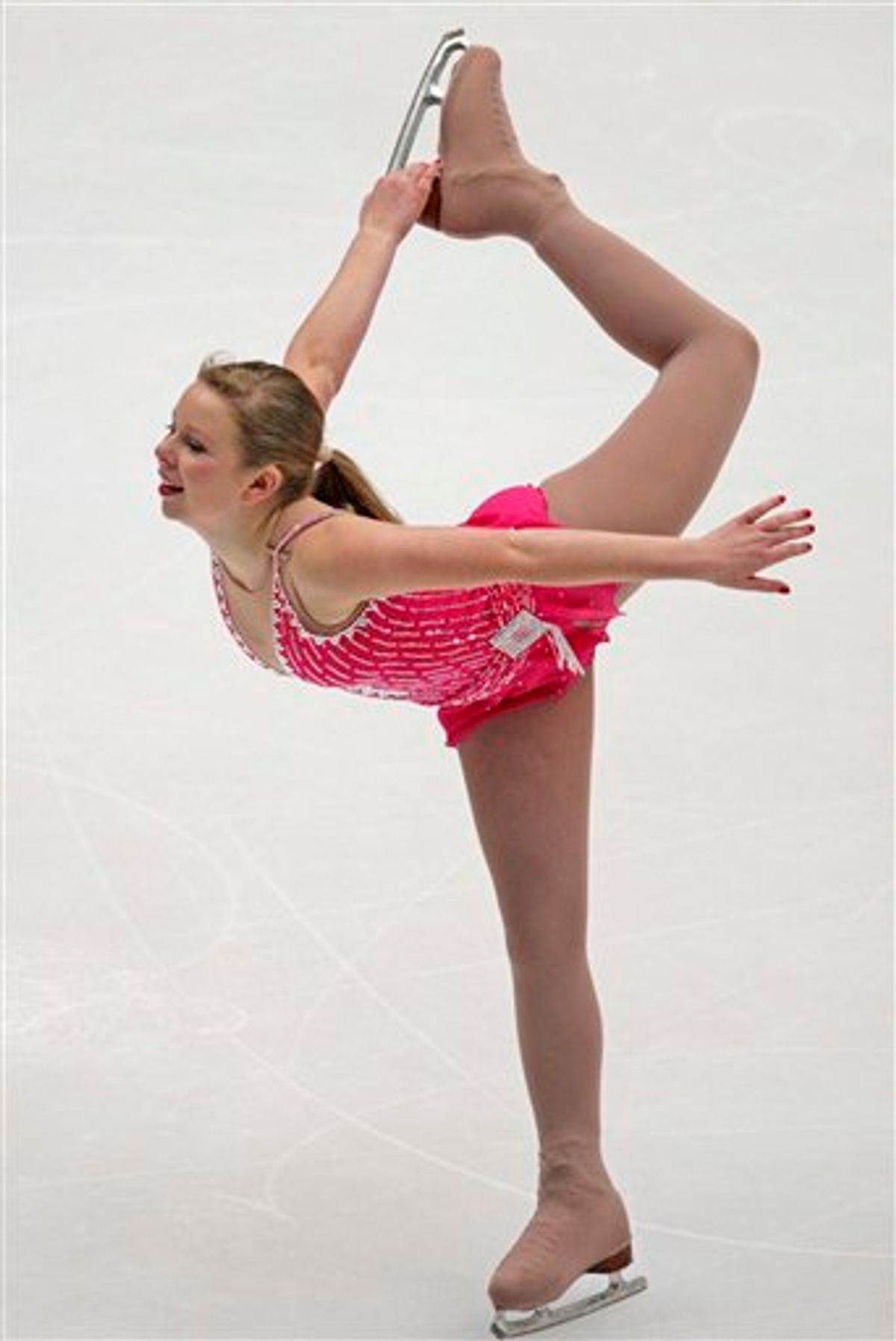 ** CORRECTS SPELLING TO RACHAEL, INSTEAD OF RACHEL ** FILE - In this Oct. 30, 2009, file photo, United States' Rachael Flatt skates her ladies short program during Figure Skating Cup of China 2009 competition in Beijing, China. The big tricks--quadruple jumps for the guys, triple-triple combinations for the women--can produce medal-winning scores. But do them without intricate footwork, fine edge quality and beautiful spins, and a performance seems hollow, little more than a blueprint. (AP Photo/Elizabeth Dalziel, File) (AP)
--

In an article that appeared Wednesday in Slate, Hanna Rosin examines the fraught world of sexuality for female athletes. Her central comparison is between skier Lindsey Vonn, who recently posed for Sports Illustrated swimsuit issue, and "pixie" figure skaters "whose notion of sexy involves sparkly outfits and blue eye shadow." Among other conclusions, Rosin declares that, for women, the trope "assigned to skiers (female gladiator) is far preferable to the one assigned to skaters (tragic nymph)."

But throughout the article are a number of arguments that left me wondering who ran over Rosin's foot with a 1/8-inch blade and left her with a grudge against skaters. After saying that at least Vonn's sexuality is preferable to that of the figure skaters, she writes, "Watching pairs skating these last few nights has reminded me of what the figure skating narrative is all about: tender young fawns gliding to maudlin music, getting thrown around, and landing on frail ankles. The vibe is more Virgin Suicides than professional sports and is thus, from the teach-your-daughters point of view, problematic."

I don't have a daughter to teach, but here are a few lessons I think the young figure skaters could impart: grace under pressure, dedication to a goal (in an increasingly instant-gratification world), the power of dreaming big, and that beauty, femininity and physical strength aren't mutually exclusive. Also, though Rosin is speaking to the narrative and not the facts, saying that the skaters are "getting thrown around" is downright offensive to these athletes, who have crazy muscle control and power, not to mention a risk-taking spirit. Plus, that description doesn't hold up in individual skating, where the women are clearly their own driving force for those whiplash jumps.

Usually these glittering, whirling girls get attention galore. But part of the reason for all the hoopla surrounding Vonn is that "This year, for various reasons, the United States does not have a figure skating star who has captured the media's heart." Rosin does not expand on those reasons, but I think it's an interesting question to consider. Why? Because there's nothing tragic or nymph-like about Rachael Flatt, who won the 2010 U.S. Championships and is the United States' top medal contender. Her short program at the championships was bubbly and upbeat, and the New York Times describes her as having "round, ruddy cheeks and uncontainable perkiness" -- hardly Rosin's "weepy heroine."

In appearance, she is not nymph-like either. And here's where things get complicated: Flatt didn't do much for me when I watched the championships, partly because I found her lacking artistry -- and I'd be lying if I denied that it relates to the fact that she seems larger than many skaters, and therefore doesn't have the balletic lines of, say, tiny Sasha Cohen. So is Rosin arguing that Flatt hasn't become a media darling because she's too smiley and too solid? Because she's not a nymph? I'm not sure, because Flatt isn't mentioned in the piece.

In addressing a true media darling, Michelle Kwan, Rosin makes navigating the sexual trickiness of figure skating sound like a lose/lose situation. Girlish and weepy is no good, yet when Michelle Kwan, attempting to be more grown-up, dressed as a sexy temptress to perform "Salome" for the 1996 world championships, Rosin says that "The resulting look is somewhere between little girls' dress-up and Thai brothel. The photos look like they should be confiscated by the FBI." So what should figure skaters do? They compete in a sport that highly favors young, small women. They may fit more naturally into a "pixie" image because they're closer in size to Tinkerbell than to the 5'10" Vonn. But when they start to chafe against that image, it's not fair to damn them for not looking young, sweet and girlish enough.

All of these questions are important because, Rosin argues, sex appeal is inherent in the sport: "One of the reasons skaters have enduring appeal is that they get to show their bodies." Rosin takes them to task for their nude tights and short skirts. But skaters don't show any more skin than track stars, swimmers or tennis players. And aside from skating in crazy shiny blue bodysuits, what are better options? The sport requires agility (i.e. non-restrictive clothing), and no male skater wants to get tangled in a long skirt as he twirls his partner into a complicated lift. Admittedly, they could cool it on the illusion netting. But be honest: unless you're a die-hard fan, spangly, oddly cut-out costumes are half the fun of watching figure skating in the first place.

In defense of women like Picabo Street and Bonnie Blair, whom she feels are insufficiently honored, Rosin says that figure skaters "hog all the glory." Is the ratio of prime-time figure skating coverage to coverage of most other sports off? Yes. But to give kudos to Vonn because she isn't "an ice princess in a short skirt" is a slap in the face to women at the pinnacle of their difficult sport. I hope that Rosin plans to watch the women's competition, which begins next Tuesday, with a more open mind and with more respect for the skaters.