Vonn glides above her demons, while the man once known as the "Flying Tomato" soars closer toward ... immortality? 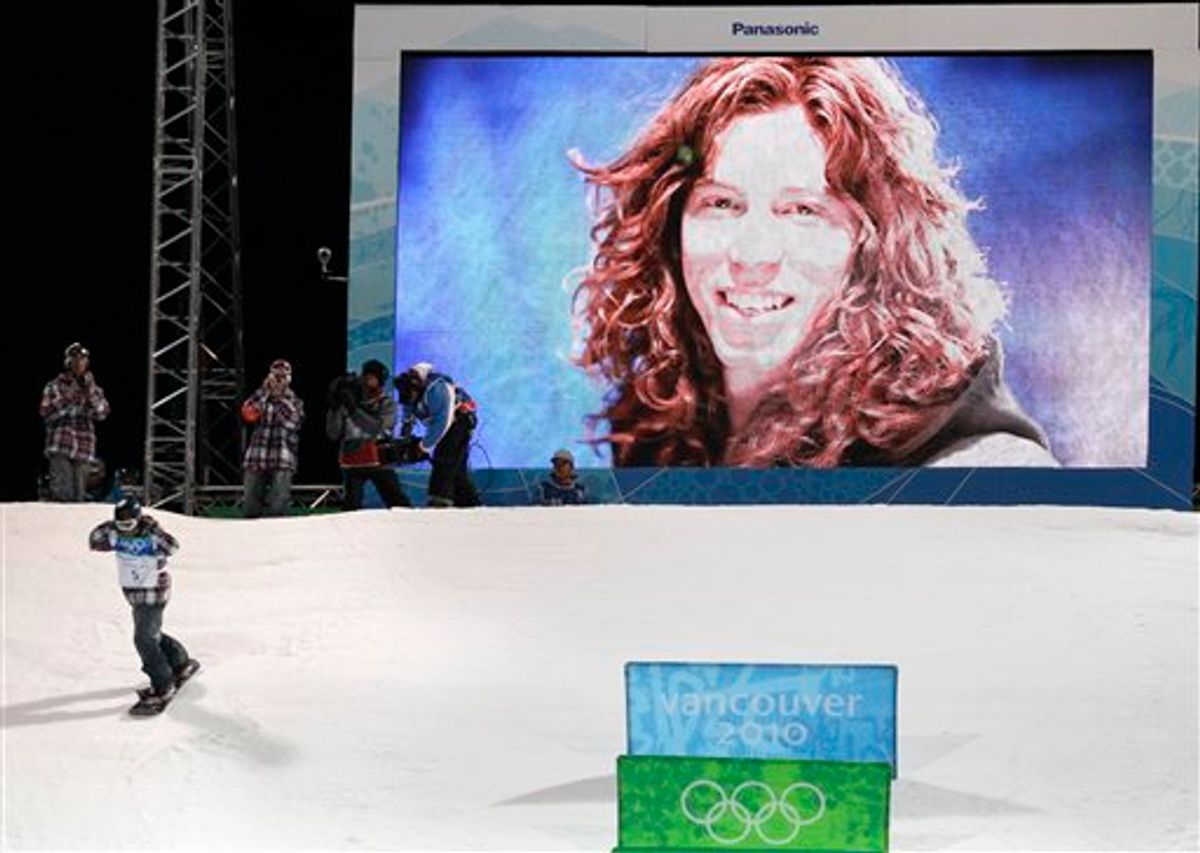 Shaun White of the USA during his first heat run in the final in the men's snowboard halfpipe competition at the Vancouver 2010 Olympics in Vancouver, British Columbia, Wednesday, Feb. 17, 2010. (AP Photo/Gerry Broome) (AP)
--

Earlier in the evening a Swedish woman skiing the downhill tumbled grotesquely down an icy mountain slope over and again in extended slow motion, NBC's commentator analyzing the angles of her body to the ground, estimating the speed with which she hit the ice at 70 miles an hour. She had huge legs, twisted around, and when she hit a gate it seemed to tear her apart. An animated arrow showed the exact place where her skull whipped onto the ice; "She simply got way more air than she bargained for," the commentator said, as the Swede, Anja Paerson, lay vaguely writhing in excruciating contemplation of God's vast silence and her own fragile skeleton. "She was launched into orbit here," the commentator said. "We've seen a couple a big crashes today, this the biggest of them." The commentator had the voice of a Country Club woman who cares way too much about tennis. A few other Scandinavians fell, though not nearly so dramatically.

Lindsey Vonn looks like the young Christie Brinkley's less attractive older sister Pam, and her history of physical suffering was earlier explored in high production value injury retrospective where doctors likened one Vonn trauma to "being struck with a sledgehammer." She was never safe, this girl, she had been born under dark stars. Once she thought the curse lifted, the coast clear, she dared celebrate, but then she nearly sliced off her thumb on the metal foil of a champagne bottle. Imagine? She skied uneventfully down the Whistler slope to the downhill gold medal that escaped her four years ago, when I was loved by cheap women and her skin was like morning cream in a rosewood bucket. The earlier video segment was so affecting that you had no choice but to root for her, to see your own stubborn thumb injuries and dashed dreams in hers. "Estranged dad of Vonn watches win on Internet," wrote the Washington Post, and the athlete's triumph as prelude to obscurity was complete.

Amid all this, some sort of speed skating event occurred wherein a number of Korean men with huge quadriceps chased an African-American man with equally huge quadriceps around a track evoking the Large Hadron Collider minus the promise and mystery. If there were falls they were not interesting enough to recall. If the Koreans existed as clichés of nuke-mongering, Japanese starlet-abducting North Koreans, as they did briefly in my mind, and not as clichés of generally pleasant, fast-assimilating, Momofuku-creating South Koreans, as they did mainly in my mind, it might have been an exciting thing to behold, at least in the terms of the theater of national enmity and cataclysm. The American, Shani Davis, eventually won, and likely later received a gold medal. That Apolo Anton Ohno and his soul patch appeared amid all this seems hardly worth noting. Named for a serial rapist many millennia out of fashion, he remains unrelated to John Lennon or Wilmer Valderrama. Speed skating might once have been interesting to watch, or listen to, in the days before jet flight, hip-hop and Playstation.

In the days before Shaun White.

Shaun White looks vaguely like Danny Bonaduce might had Danny Bonaduce lived a happier, healthier life, and so makes deep amends for all the awful things done by our ravenous culture in its devouring of Danny Partridge and therefore, in a roundabout way, he can only be a redemptive figure of the Christlyish sort: As an infant he had open-heart surgery, and on TV, or at least HDTV, you can still see the Roman spear scar running down his chest. As a teenage skateboarder he once collided with another teenage skateboarder, fracturing his skull, hovering between life and death for, by his estimation, 10 to 15 minutes. Sports offer the promise of communion between God and man, and snowboarding, as wild tribute to the gods of lifestyle and technology, may be the only real sport left in these Olympics and, it follows, the event where we most clearly glimpse the future and, if we keep following, the most perfect arena for the savoring of death and displays of death defiance. Which is all to say that Shaun White was magnificent in a manner so truly Olympian it can only be explored in the realm of myth:

This past November White's one unvanquished rival, Dag Torgborn Johansdottir of Monaco and Iceland, broke his spinal column, destroyed his spleen and lost half his teeth trying to learn the Quadruple McTwist, also known as the Barbarossa, a jump created by White while on Ritalin-laced peyote, which sealed his dominance of the snowboarding world; Johansdottir is sitting out these games, learning to talk again. So there was never any real challenge to the American, who after a long weekend at a Nepalese ashram changed his nickname from the Flying Tomato to Big Vishnu and earlier that day astonished the agora by gaining 50 feet of air in warmups, 60 in qualifiers, and then, by some (conservative) estimates, rushing 117 feet skyward in a rotating Buddhist-prayer position during early medal competition. For the finals his only credible competition was the frail-hearted Hiroshi Yamamoto, a recovering Hikikimori who sat out the Turin games in his childhood bedroom drawing exquisite pictures of dragons and writing lovelorn e-mails to spam personages while listening to Radiohead's "Kid A" on repeat; Yamamoto possesses an ease of motion and awe of space suggesting broad acceptance of impending human doom and this has made him beloved in nursing homes across the world. After his strong first run NBC cut to the recreation area of Our Holy Lady Home in Warwick, R.I., where oxygen-masked residents squinted through sad eyeglasses at a midsize Sony Trinitron in the company of a death-sniffing cat. But Yamamoto fell flat on his ass in the second run, and then nothing in the world could stop Big Vishnu.

So it was math and not hubris that saw him celebrating victory before even taking his final run, guaranteed gold before even leaving his starting perch, where NBC found him breaking from iPhone SimCity to accept a congratulatory conference call from David Rockefeller, Ashton Kutcher and the full partnership of Creative Artists Agency. "Let's get into the head of Shaun White," said snowboarding analyst Chuck Massengill as, out of respect for the privacy of CAA, NBC editors cut to footage of White's earlier run. "He has so much static. He has to do jumps where he almost kills himself, huge air, amazing, twist, double-cork, twist, double cork, another, amazing, he is amazing."

"A global phenomenon, leading the way," said the second analyst, Cornelius St. Hilaire, who sounded like he feared the return of blood work. "The pioneering and progression of sport. He's so far ahead of the next guy. The chants of USA are going up here. I feel transported to another era. Even the colors are different, changing, simpler but more vibrant, like the pictures you keep always with you of yourself as a child. Innocence. Wonder. Flight dreams. It's hard not to feel the adrenalin rush, you want to weep. I'm very lonely."

Then the Chinese robot camera zoomed in with Swiss optics and German precision on the American Shaun White, now in conference with his head of security, the private detective Mitch Havemeyer-Dubois, his choreographer, Sino-Prussian movementologist Otto Wang, his rhythmatician, retired Basque electrocrunk rapper Young Manchego, his iPhone caddy, a brain-unwashed Congolese child soldier once known as Sanjo Sanjo Obwango, lately adopted and rechristened Gary Sternbergh. Also an olive-skinned documentarian named Wendy Dubrowski who a Gawker commenter, OliveGardenTaco, would suggest to be pregnant with White's fifth love-child for no greater reason than to break the doldrums of a February afternoon:

"Do whatever you want, man."

"What do you think?"

"Do whatever you want, have some fun, what do you want to do?"

"Yeah, drop a Quad Mickey on 'em. Just make sure you stomp the shit out of that," said Wendy, kissing White in a manner so soulfully tongueful it would prompt the contemplation of innumerable affairs in Manhattan, the envisioning of 18 film treatments across Laurel Canyon, a dozen letter-writing campaigns to NBC affiliates across the Great Plains. "Shaun White said if he won here today he would get a section of the Baghavad Gita tattooed across his back," said Cornelius St. Hilaire, giving into tears as White pushed off from his promontory into the first moments of his can't-lose glory run. "I think we can safely say that the Vancouver ink scene is about to get a new customer."

The crowd held signs that said "USA" and "Go Big Vishnu!" while a group of New School truants unfurled a homemade banner that, for just a second, read, "Long Live American Myth." The people lived in frenzied unison as White coasted down the pipe, gaining speed against glittering flashes, angry lights, a dance beat materialized from nowhere. They took a single breath as he hit the lip, soaring high, 60 feet up, 90 feet up, cutting fast through the thinness of awe in the night, sailing higher still, incredibly high, so that Chuck Masengill made a joke about him crashing into a geosynchronous satellite, and Cornelius St. Hilaire said no, it would be a geostationary satellite he'd crash into, and the censorial beep came late as he said it wouldn't matter, Big Vishnu would send that fucker into graveyard orbit. And as the curse beamed out from satellites of all kinds, White continued up higher still, and the Chinese German Swiss camera made a doleful, grinding sound as it strained to follow him, and as he turned to the camera Shaun White broke not just laws of gravity but the fourth wall itself, wondering aloud in his own offhanded way, "Just what the fuck does Google do with all the e-mails of the dead?"