The debonair actor should have been nominated for "Fantastic Mr. Fox," not the distasteful "Up in the Air" 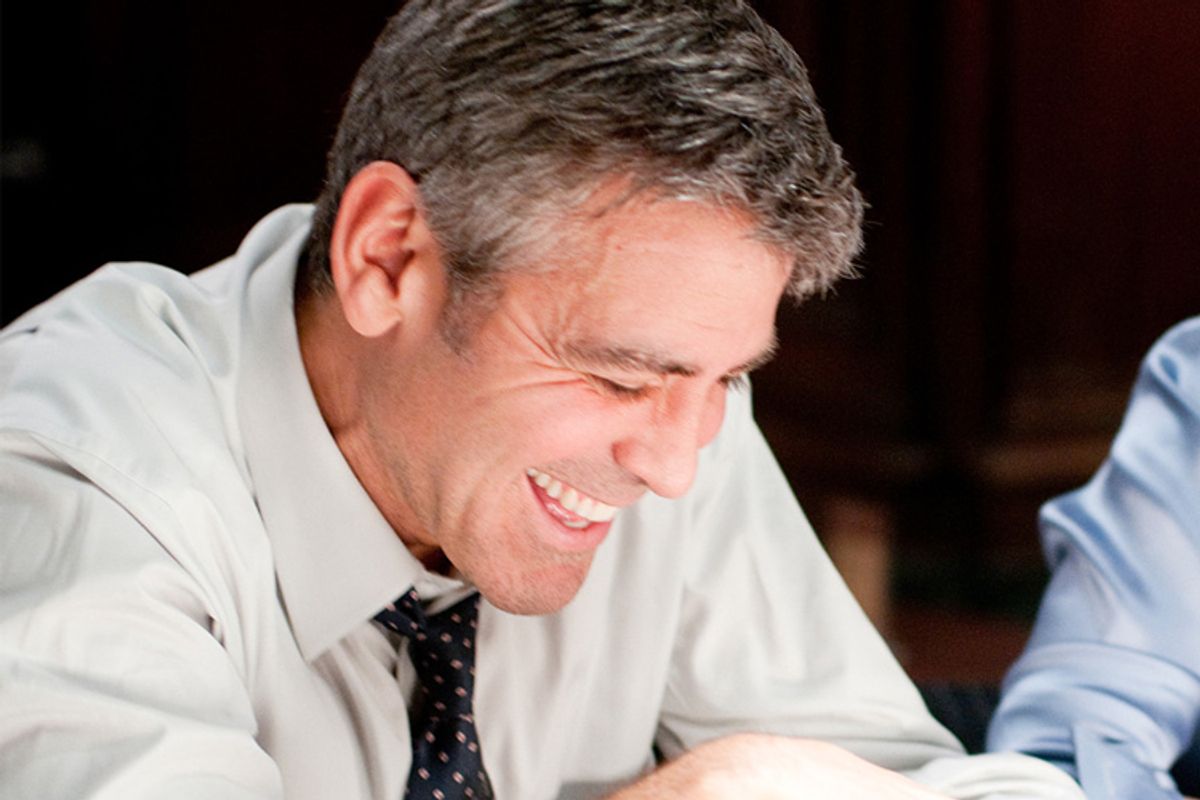 "Up in the Air" -- which was adapted, loosely, from Walter Kirn's novel of the same name -- is a cannily crafted picture about the dangers of soullessness. Like the line of goods its lead character, Clooney's Ryan Bingham, is paid to sell, it is itself a kind of glib sales campaign. Ryan is hired by big companies to do the dirty work of firing employees. His spiel involves dropping the bad news and then reassuring the newly jobless that this is really the first day of the rest of their lives: They are in fact lucky that the organization to which they've been so loyal is giving them the gate. Ryan doesn't have any qualms about the ruthlessness of his job because he has so few attachments himself: He's only marginally in touch with his family (including his sweet, about-to-be-married sister, played by Melanie Lynskey), and he wouldn't dream of having a regular girlfriend. And so when he meets satiny-smooth fellow business traveler Alex (Vera Farmiga), who's great in the sack and has no interest in long-term commitment, he thinks he's struck gold -- until he decides that maybe he really does want more.

I find "Up in the Air" distasteful: To me, the movie's ending, which features nonactors providing testimonies about how losing their jobs changed their lives for the better, actually reinforces the corporate-speak bullshit Ryan Bingham is paid to sling, instead of contradicting it. Even so, I found that Clooney's performance went down like a shot of bourbon after a hard day on the road -- it's just the slippery-smooth performance a movie this facile demands. For much of the movie, Clooney is Danny Ocean, selling a line of goods that smells a lot like charm. That's something Clooney is extraordinarily good at, perhaps too good.

Clooney does everything right here: He's suitably swoony as he first falls under Alex's spell. And in his finest moment, when he realizes Alex isn't the person she's so aggressively advertised herself to be, the look in his eyes can only be described as a kind of bereavement. The romantic dream he's barely had time to nurture has just been killed off in him, and the pain of letting it go seems unbearable.

But most of what Clooney does in "Up in the Air" is exactly what we'd expect him to do. There are no real surprises wrapped up in this performance, though Clooney certainly delivers the base level of actorish likability that we've come to expect from him: Awarding him the Oscar would be like giving him a bonus for his efficiency.

Clooney was far more soulful and complex in "Michael Clayton." That role demanded more, and drew more, from him; it was one of the great performances of 2007. And even though we can't see his face in "Fantastic Mr. Fox," I find that performance far more vivid than anything Clooney does in "Up in the Air." When he and Mrs. Fox (Meryl Streep, in another fine "invisible" performance) argue bitterly over a matter not just of love but of life and death, she corners him, and he concedes: "I'm a wild animal."

There's real remorse in the way Clooney offers that line: It's not just an excuse for bad behavior, but a painful admission of self-doubt, possibly self-loathing. I recently found some blathery chatter online about how providing a voice for an animated character is inherently less significant than a live-action performance because it requires less from an actor in physical terms. But that logic demands that we grade a performance according to how much toil and suffering went into it -- how much time an actor spent perfecting an accent, or how much weight he or she gained (or lost) to play a character -- instead of assessing how deeply the performance affected us. Clooney may have worked hard in "Up in the Air," but the seemingly casual savoir faire of "Fantastic Mr. Fox" burrows much deeper, and is much harder to pull off. Lending your voice to a puppet demands humility. Clooney surrenders himself to an armature of wire and fake fur, and still finds the truth of the character. That's what you call acting; everything else is just salesmanship.