"The Routes of Man": Roads that are changing the world 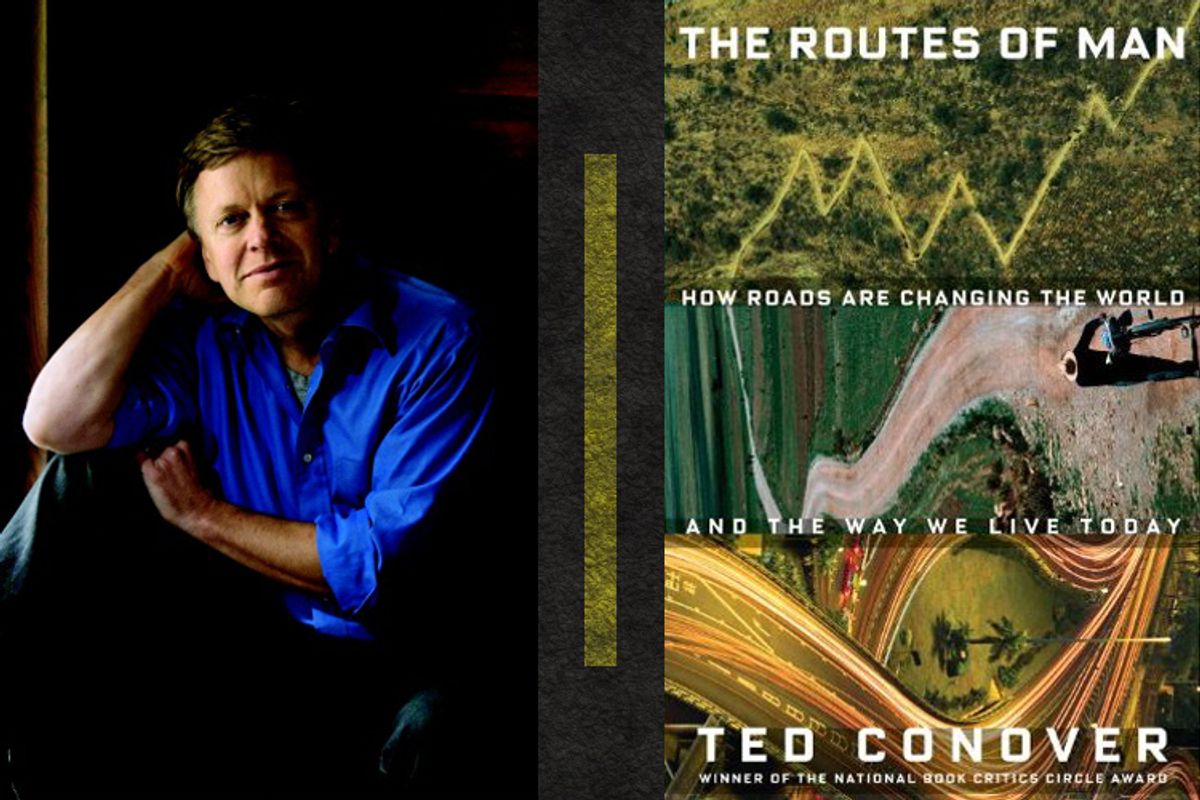 Ted Conover, author of "The Routes of Man"
--

Ted Conover may be one of America’s toughest nonfiction writers. For his book "Rolling Nowhere," he illegally rode America’s railway system with drifters and undocumented farmworkers. In "Coyotes," he disguised himself as an illegal immigrant and twice crossed the Mexican-American border, and for his 2001 National Book Critics Circle Award-winning "Newjack,"he spent a year working as a prison guard at Sing Sing.

His latest book, "The Routes of Man: How Roads Are Changing the World and the Way We Live Today," is no less ambitious. A mixture of travelogue and essay, Conover’s vivid, smart and evenhanded book chronicles his journey down several of the world’s most perilous roads — ranging from frozen rivers to hyper-modern highways, from India to Peru — to discover how these roadways are changing the world and the lives of people who live along them. He drives past elephant roadkill on Africa’s notorious AIDS highway, gets pelted by rocks in the West Bank, and, on one particularly memorable occasion, is trapped on the outside of a stalled minivan in Nigeria, while a group of "area boys" converge on his position.

What emerges from his stories is an idea that roads can serve multiple purposes: fostering development while destroying the environment; providing livelihoods while spreading deadly diseases; providing safe passage to some while endangering others. In the case of China's rapidly expanding highway system, they also serve as a foreboding reminder of our stark environmental future.

Salon spoke to the surprisingly soft-spoken Conover over the phone, from the Detroit airport (where he was waiting for a flight), about his riskiest moment on the road, America’s highway obsession, and why we’re right to be afraid of China’s car-buying revolution.

Given that so much focus now is on digital communication, it seems almost nostalgic to talk about roads. Why did you decide to write a book on them?

There are newer networks but none so fundamental: 1.5 percent of the continental surface of the U.S. is now paved. We often cease to think about the existence of roads, and yet it’s the largest human artifact and the one thing that makes possible all the other things.

They’re integrating regions in Southeast Asia and in Latin America, in particular, and little by little in sub-Saharan Africa. And, as you know, China is sort of a separate case. China is set to equal our interstate miles within another 20 years.

Roads are a yardstick of the growing complexity of the world. They are one of the essential connections between people, and through them you can look at both the ways connection propels us forward and the ways it sets us back.

You spent a lot of time on China’s new highway system with a group of Chinese driving enthusiasts. How are these roads different from our own?

In China they’re a source of national pride, so extreme attention goes to keeping them spiffy. Many of them are designed quite beautifully — the guardrails and the reflectors have a stylishness to them, especially between the major cities. But the maintenance is very human labor-intensive, so instead of big brushing machines you’ve got squads with brooms made out of twigs. It’s quite a striking juxtaposition: the latest engineering and beautiful landscaping and stylish accoutrement and signage and the guardrails, and then next to that, the peasants doing the dangerous roadwork, and beyond the shoulder, the peasants whose land was confiscated to make way for the road. I think it’s a symbol of progress, but it’s also a symbol of unequal progress.

What kind of unequal progress?

The people who can afford to drive these roads in their own cars tend to be a class of wealthy people you didn’t see 20 years ago [in China]. It helps the nation progress, but they’re also conduits of envy and resentment. They are a potent new force to be reckoned with — many people have asked me, Why didn’t you write about an American road? — and it seems to be other places where the meaning of roads is playing out in the most dramatic fashion.

It’s like a frontier space. If you’re used to creeping over the speed limit in the U.S. it’s amazing to see that in China, police don’t pull over speeding on highways or people are never penalized for bad driving — for passing over the shoulder at high speeds, or driving drunk.

To me, it’s terrifying from an environmental standpoint that the Chinese are getting into the car culture. Am I right to be scared?

In India and China, we can’t say no. We’ve had our cars. We’ve enjoyed them, We have no moral or practical basis for saying no. I think [Americans] see the writing on the wall better than people in a lot of places, and as you say, it’s frightening. The environmental cost of that many internal combustion engines is gigantic, and I think the best hope is in a cheap new technology. I don’t know what it is, but some affordable, less-polluting technology that can be adopted by these millions of people who are about to buy their first car.

You visited Central Africa’s so-called AIDS highway, whose truckers and prostitutes supposedly helped spread the virus to the Western world, in 1992. You went back 11 years later for the book. What changed?

The tragedy remains extreme, but the level of sophistication and dialogue has increased greatly, and you can see now that there will be life after this epidemic. When I was there before, that was kind of uncertain. The rate of infection was over 50 percent for the drivers and sex workers. Many of the men I knew from before have passed away.

There’s still plenty of denial of AIDS, but now it's part of everybody’s vocabulary, and people use the English word for it. There’s such a stigma to death by AIDS that the battle is still being fought, but it’s much more part of the common discourse. I think women in particular are speaking up about it.

I spoke with sex workers, and when I visited, they were not at all shy about telling me they had the virus. They asked me what they should do about it, which was the hardest question I was asked while researching this book. I’d assumed that when they realized they were positive they’d stopped their sex work, and they had not. I understand why they didn’t. They had kids to feed and they feared destitution.

The highway has become notorious for its role in bringing AIDS to the outside world. Are the people who live and work on it aware of its notoriety?

They know of its fame. There’s very much a sense in African fiction that the road takes this terrible toll, but with the guys I was with, it’s not singled out or tainted because of that. It’s the source of everything. Yes, bad things happen on the road, but that’s because everything happens on the road. That’s how they get their work. That’s how they move from their family to the coast. There’s a lot of belief that bad spirits transit the roads, and you have to watch out for flying snakes and spirits of ancestors.

What’s the scariest moment you had on the road?

Many of the people who die on roads have no idea 10 seconds beforehand that that was about to happen, and I was acutely aware of that — especially driving superfast in places like China. I had to adopt a sort of fatalistic attitude about that, and just make my peace with the fact that death on roads is hard to see coming.

The most frightening moment I had was probably in Peru. There are a lot of remnants of the Shining Path in the Andes, and one day, I was sitting on the side of the road when a blue butterfly landed on my knee. It was bigger than my hand and a lovely iridescent blue. I brought out a cheap plastic camera I’d bought, to take a picture of it, and a campesino came up to me. He said, in Spanish, If you’d been doing that 10 years ago they would have found you hanging in the tree right there. He meant it was such a bourgeois affectation. Something as innocent as photographing a butterfly!

Five days later, I passed a kid wearing an Osama bin Laden T-shirt, and I said, I’m from New York, and I knew people in the towers that day, and your T-shirt upsets me. He said, Bin Laden is a champion of the world’s poor. And I said, Well maybe of the Muslim poor, but I don’t think he’s a champion of you.

Maybe it’s because it was so near 9/11, but those two incidents gave me a feeling of passing through an unfriendly place, and it’s not a feeling I often had.

Obama’s most high-profile public works projects is the construction of several high-speed rail corridors. Do you think this is a sign that the American love affair with highways is ending?

I don’t think their centrality to American life is going to fade anytime soon, but I think the rise of concepts like carbon footprints spells the end of some of the unrestrained excitement which we have long attached to American highways.

So much American mythology deals with the road — from Jack Kerouac to Cormac McCarthy's "The Road." Why are Americans so obsessed with roads?

In the old country, you’ve got town squares and city centers, and in the United States you have roads. If you think of Walt Whitman’s "Song of the Open Road," it’s a long list of all the people he’s going to meet as he walks down the road and how happy he is about that. Those things are very American, this idea that the road is where you meet people, not at home or downtown. It’s the democratic space, the common place for us. Roads knitted our country together.

Kerouac and the beats and the whole â€˜60s counterculture had this idea that the road is a place for discovery and exploration and even self-realization. There’s also the idea that if it’s not working out where you are, you can move, and that’s how we express our drive for something better.