Small plane crashes into Austin building housing IRS, but official says it does not appear to be terrorism 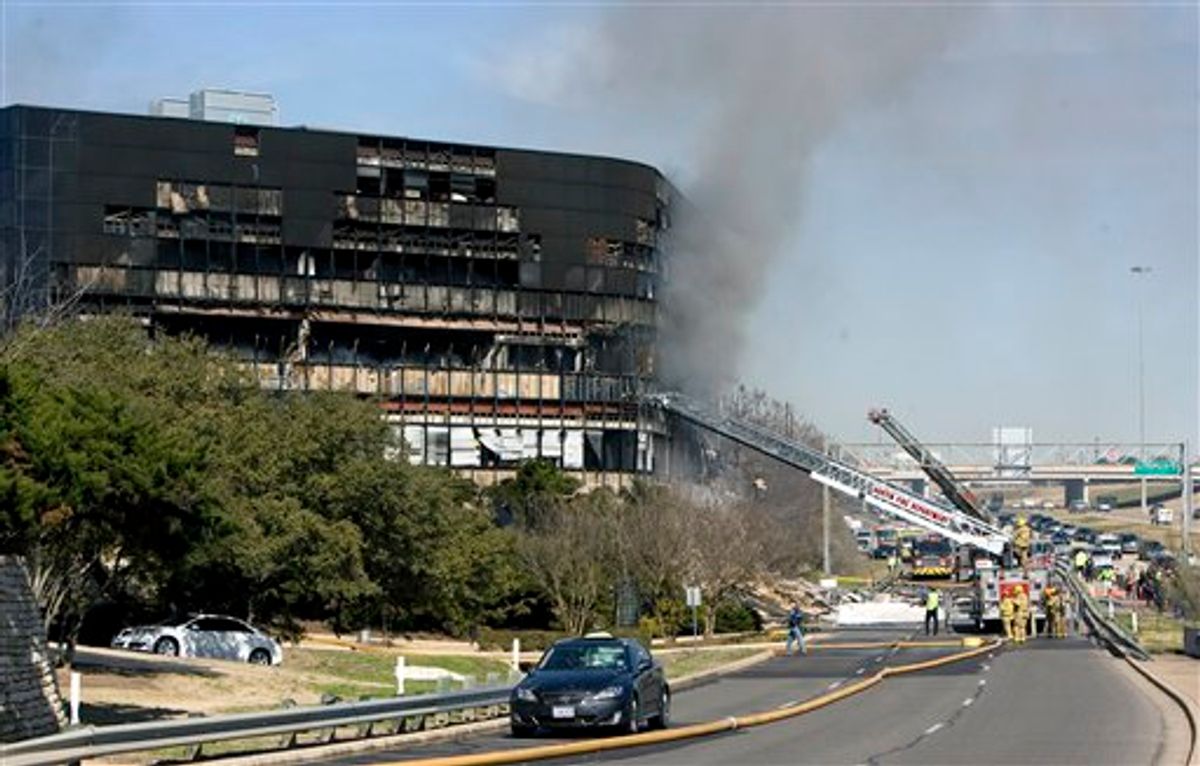 Smoke billows from a seven-story building after a small private plane crashed into the building in Austin, Texas on Thursday Feb. 18, 2010. (AP Photo/Austin American-Statesman, Jay Janner/) MANDATORY CREDIT. NO MAGS, NO SALES, NO TV (AP)
--

A low-flying small plane crashed into an office building that houses the Internal Revenue Service in Austin, Texas on Thursday, and at least one person was missing, witnesses and officials said.

Assistant Austin Fire Chief Harry Evans said two people have also been taken to a hospital. Their conditions were not immediately known.

A law enforcement official said the crash did not initially appear to be the result of a crime or terrorism. The official spoke on condition of anonymity because the person was not authorized to publicly discuss the crash.

Thick black and gray smoke was billowing out of the second and third stories of the building Thursday as fire crews using ladder trucks and hoses battled the fire. Dozens of windows were blown out of the hulking black building, and vehicles traveling on a nearby highway paused to look.

Peggy Walker, an IRS revenue officer who works in the building said she was sitting at her desk when the plane crashed.

"It felt like a bomb blew off. The ceiling caved in and windows blew in. We got up and ran," she said.

Matt Farney, 39, who was in the parking lot of a nearby Home Depot, said he saw a low-flying private plane near some apartments and the office building just before it crashed.

"I figured he was going to buzz the apartments or he was showing off," Farney said, adding that the plane dipped down. "It was a ball of flames that was high or higher than the apartments. It was surreal. It was insane. ... It didn't look like he was out of control or anything."

Sitting at her desk about a half-mile from the crash, Michelle Santibanez said she felt vibrations. She and her co-workers ran to the windows, where they saw a scene that reminded them of the 2001 terrorist attacks, she said.

Fire crews were inside the building battling the blaze and looking for survivors, Evans said.

Federal Aviation Administration spokesman Lynn Lunsford said the agency was investigating but had no immediate information on the type of plane or how many people were on board.

Associated Press writers April Castro and Jay Root in Austin and Devlin Barrett in Washington contributed to this report.